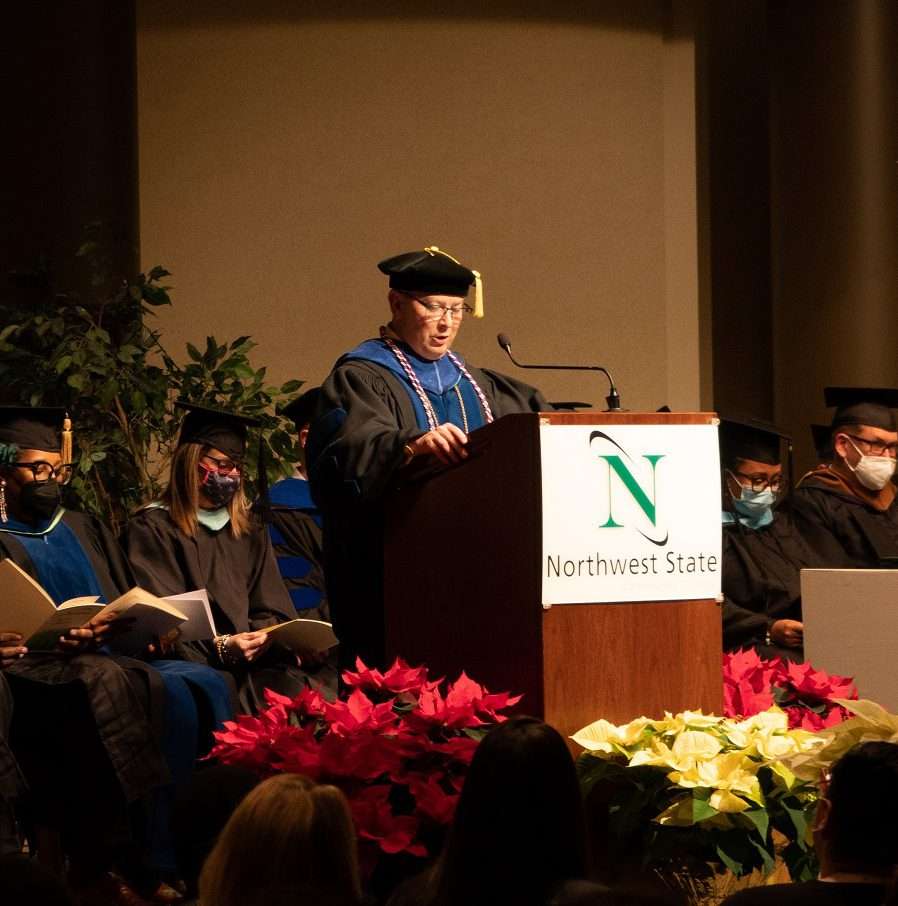 The ceremony recognized the awarding of 146 degrees and/or certificates to 137 students from the divisions of Arts & Sciences; Business & Public Services; Nursing and Allied Health; and Science, Technology, Engineering Technology & Math (STEM) and Industrial Technologies.

Snider noted that 81% of the graduating class lives in the College’s six-county service area (Defiance, Fulton, Henry, Paulding, Van Wert and Williams counties), the average age of the graduates is 28, and the grade point average of the class is 3.25.

Waite reiterated the College’s mission statement, noting “the time I spent here at NSCC has made me an individual who wants to make a difference in my community.”

Waite thanked numerous faculty and staff at Northwest State, and implored all the graduates to pay it forward. “We will all treasure the personalized learning, teamwork, and student camaraderie we’ve gained here. I encourage my fellow graduates to go and serve with their newfound talents, strengths, and confidence.”

“My wish to you all is to make a difference and empower others to do the same,” he said.

The keynote speaker for this year’s commencement ceremony was Dr. Patrice McClellan, President and Lead Strategist of The Ronald Group in Toledo.

McClellan is a dynamic leadership coach and organization strategist, nationally-recognized for her race scholar and leadership expertise with over 20 years’ experience. Dr. McClellan was an associate professor of Business and Leadership at Lourdes University, and prior to that, was a faculty member at Miami (Ohio) University.

McClellan’s speech, titled “Level Up,” was full of energy and was quite uplifting. “The way to ‘level up’ is to be the person someone else needs to achieve their dreams,” she said.

The College also recognized one individual that was awarded Emeritus status, an honorary title awarded for distinguished service to the academic community. The lone recipient was a previous Board of Trustees member, Sue Derck.

Ms. Derck served as a trustee on the Northwest State Board of Trustees for over 20 years as a representative for Paulding County.

During her four terms on the Board, Derck held the positions of Chair, Vice Chair, Secretary and Representative to the Ohio Association of Community Colleges Governing Board as both a delegate and an alternative.

One unique note about Ms. Derck is she hired four different presidents of Northwest State.