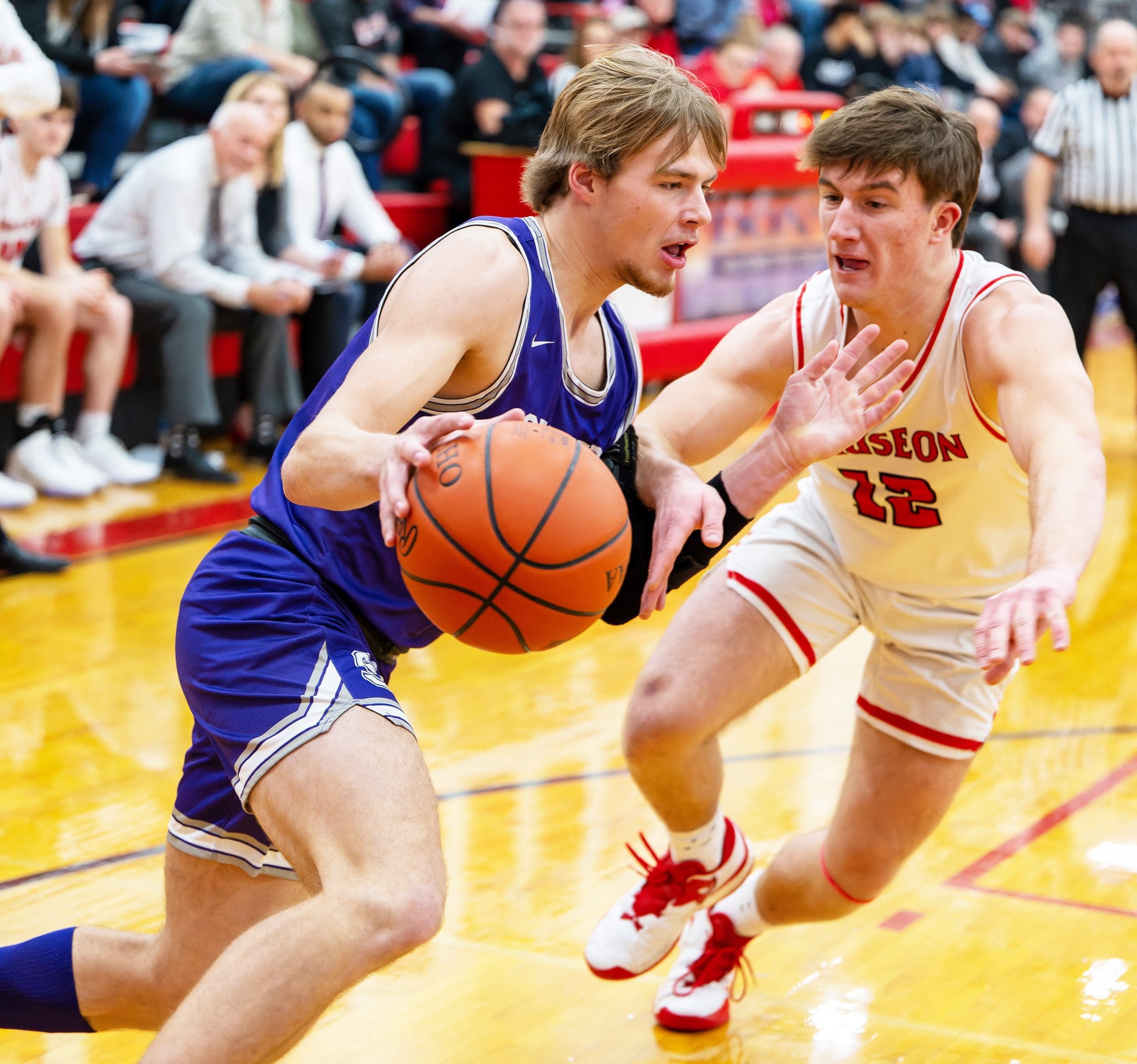 BIG NIGHT … Swanton’s Cole Mitchey drives baseline against Jude Armstrong in the first quarter. Mitchey had 12 points in the opening quarter on his way to 34 points. (PHOTO BY JACOB KESSLER, STAFF)

WAUSEON – It’s safe to say Swanton senior Cole Mitchey was in “the zone” on Friday night at Wauseon High School.

Wauseon had no answer for the Bulldog as Mitchey scored inside and from the perimeter to finish with 34 points as Swanton picked up a 61-43 NWOAL road win.

Mitchey started fast with three of his six triples in the opening quarter and a conventional three-point play to end the quarter to give Swanton a 16-9 lead.

Swanton continued to increase their lead in the second quarter as Charlie Wood had an offensive rebound bucket followed by a steal and layup from Luc Borojevich to make it 22-12.

The Indians responded with a three ball from Tyson Rodriguez to start an 8-2 run that included a trey by Elijah McLeod and a Jack Leatherman hoop to trim the Bulldog lead to 24-20.

Mitchey then rattled off Swanton’s final six points of the half to give him 18 points by going 4/4 from the foul line and hitting a reverse layup on a baseline drive to give the Bulldogs a 30-22 lead at halftime.

The Bulldogs three-point barrage continued to open the second half with Drew Smigelski knocking down a triple from the right corner to make 33-22.

Wauseon’s Landon Hines turned in a three-point play to keep the Indians close at 33-25 before field goals from Mitchey and Kayden Davis pushed the lead to 37-25.

Wauseon would cut the lead back to single digits at 41-33 with Leatherman drilling consecutive shots from deep and Hines scoring on an offensive rebound.

Once again Mitchey responded with the last five points of the frame by going 2/2 at the foul line and then buried a corner three to give Swanton (10-2, 1-1 NWOAL) a 46-33 lead after three quarters.

The Indians started the final frame with an 8-3 spurt thanks to a baseline layup by Leatherman, Rodriguez would score on the low block, Hines added a bucket, and Jude Armstrong had a steal and layup to make it 49-41 with 4:44 to go.

Following a timeout, Swanton got a dunk from Mitchey on a pass from Callicotte followed by field goals from Davis and Smigelski to close the game on a 12-2 run.

On the night, Swanton hit 52% of their shots from the floor and eight three pointers, six of them by Mitchey.