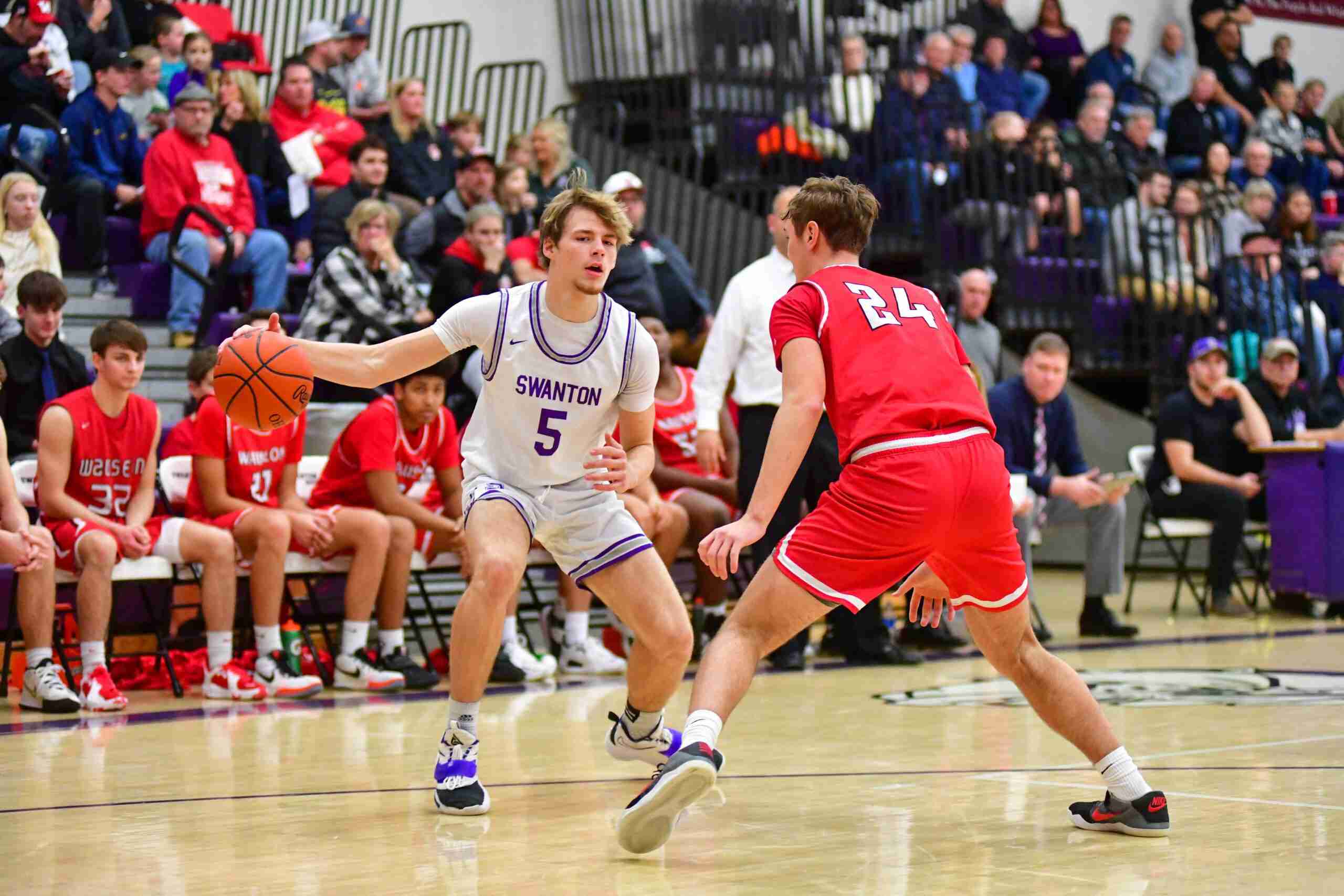 LEAGUE LEADERS … Swanton’s Cole Mitchey looks to make a move in the first quarter. Mitchey had 13 points to lead all scorers as the Bulldogs took sole possession of first place in the NWOAL with the win. (PHOTO BY JACOB KESSLER, STAFF)

SWANTON – The shooting in last night’s NWOAL matchup for sole possession of first place in the league was as cold as the weather outside.

Swanton scored the game first six points as Sam Betz had two layups off Wauseon turnovers (Indians had 7 TOs in the quarter) and Luc Borojevich knocked down a jumper.

Jonas Tester would finally get Wauseon on the board with 4:00 to go in the quarter with a field goal as the Bulldogs led 8-2 after one quarter.

A Cole Mitchey triple started the second quarter for the Bulldogs and after a conventional three-point by Mitchey and a fastbreak layup from Borojevich the lead was now 16-4.

Wauseon was able to stop the Swanton run with a 5-0 spurt of their own, but a Hayden Callicotte offensive rebound putback at the buzzer gave the Bulldogs an 18-9 lead at halftime.

Swanton controlled the offensive glass in the first half with nine offensive rebounds which allowed them to put up nearly twice as many shots (8/27) than Wauseon (4/14).

Borojevich drained a three ball to start the third quarter, the only Swanton field goal (1/10 in half) of the second half, to extend the lead to 21-9

Wauseon’s offensive struggles continued as they wouldn’t get a field goal in the quarter until Tyson Rodriguez hit a three-pointer with 1:00 left, capping off a 1/9 shooting quarter for Wauseon.

The Indians found some scoring to opening the final quarter as Rodriguez made a three-pointer from the left wing and Landon Hines scored down low to trim the Swanton lead to 22-19 at the 5:58 mark.

After a Swanton timeout, the Bulldogs had a 3/4 stretch at the foul line while Wauseon got two free throws from Jude Armstrong followed by an Armstrong layup after a Swanton turnover to make it 25-23.

Back-to-back empty possessions though by Wauseon in the final minute led to Mitchey going 4/4 at the charity stripe to close out the win, Swanton’s first victory over Wauseon in eight years.