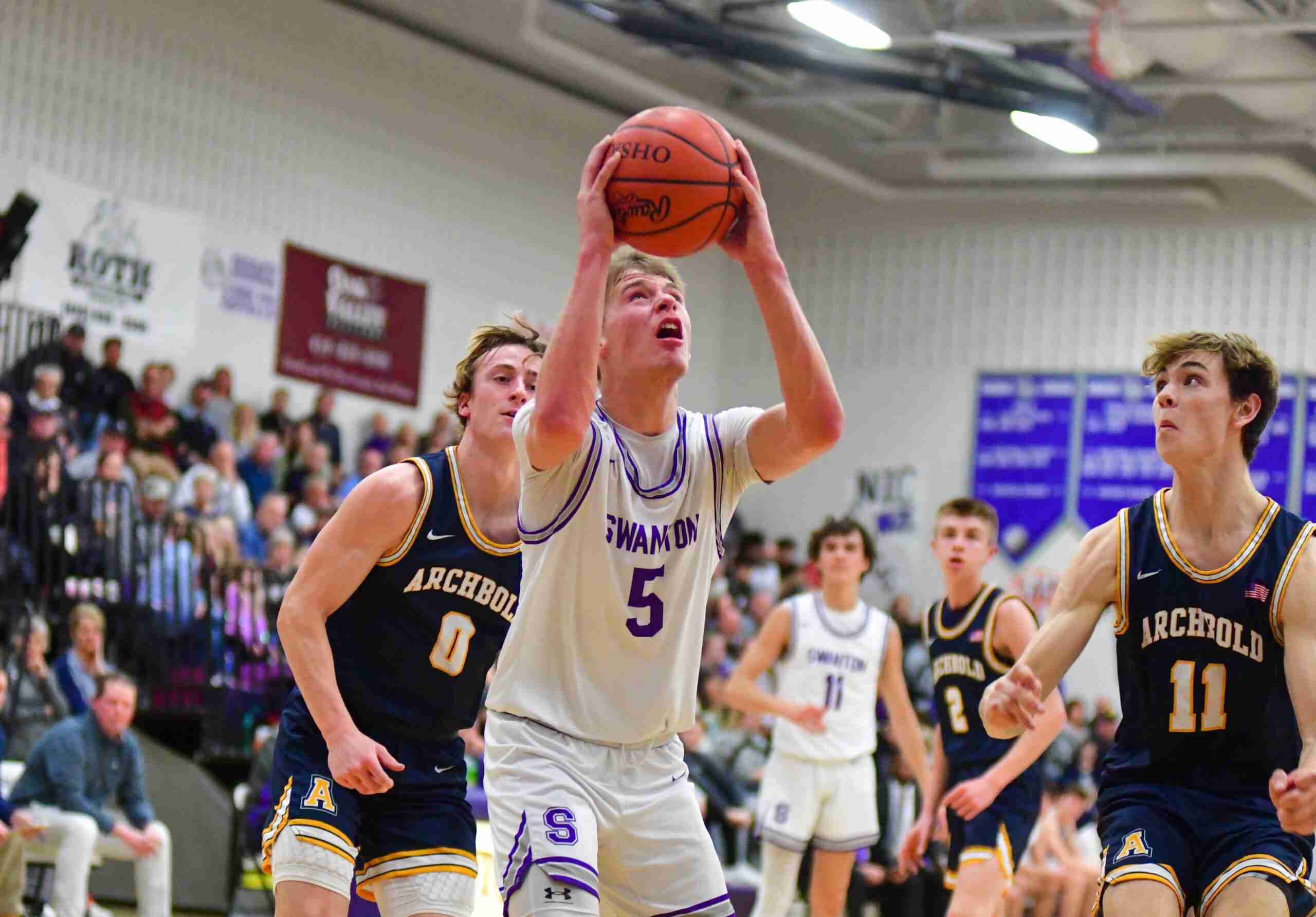 BIG FIRST HALF … Cole Mitchey scores inside for the Bulldogs in the second quarter. Mitchey had nine points in the first half to help the Bulldogs grab a 27-18 halftime advantage. (PHOTO BY JACOB KESSLER, STAFF)

SWANTON – With the Bulldogs struggling to score and Archbold rallying from 12 points down in the second half to tie the game, the Borojevich brothers took over for Swanton.

Luc Borojevich gave Swanton the lead back with a triple after the Streaks tied the game in the final stanza and Nic Borojevich had two buckets and two free throws down the stretch as Swanton pulled away for a 45-39 win.

The win gives the Bulldogs their first outright NWOAL title since 1982, having shared the championship in 2015.

It was a strong start for Swanton in front of a raucous crowd at the Dog Pound as after taking a 6-5 lead, the Bulldogs closed the quarter on a 6-0 with back-to-back buckets from Sam Betz and field goal by Cole Mitchey for a 12-5 advantage.

Archbold quickly cut into the lead to start the second with a DJ Newman jumper in the lane followed by Tyler Hurst getting open inside for a layup to make it 12-9.

After a Swanton timeout, Mitchey scored again, Nic Borojevich added a basket, and after another field goal by Mitchey the lead was back to seven points at 18-11.

The teams traded buckets before Nic Borojevich drilled a triple and he would then score on an offensive rebound after a missed dunk by Kayden Davis to give Swanton their first double digit lead at 25-15.

Alex Roth answered for Archbold with a three-pointer before Betz ended the half with a jumper off an offensive rebound to give the Bulldogs a 27-18 lead.

Swanton took their largest lead of the game in the early stages of the third as another hoop from Nic Borojevich pushed the lead to 30-18.

With Archbold facing a 32-20 deficit, Newman would begin to take over on offense for the Bluestreaks.

After two free throws from Gavin Bailey, Newman scored six straight points for Archbold, who would end the third on an 8-0 run to cut the Swanton lead to 32-28.

The Bulldogs struggled in the third quarter shooting the ball by going just 1/8 after a 12/22 first half to help Archbold work their way back into the game.

The surge continued to start the fourth with a bucket by Roth and after Cade Brenner went the length of the court for a layup, the game was tied 32-32 with 5:36 remaining.

Two free throws from Mitchey stopped the momentum briefly, but Roth hit a running one-hander in the lane to tie the game again, this time 34-34.

The Borojevich brothers then took matters into their own hands at that point beginning with Luc knocking down a corner triple to put Swanton back on top at 37-34.

Archbold would have numerous scoring opportunities down the stretch, but the shots wouldn’t fall and Nic Borojevich sealed win with a breakaway layup to make it 45-36.

The final quarter saw Archbold put up 16 shots compared to only nine by Swanton thanks to five offensive rebounds, but the Bluestreaks were able to hit only five of those shots.

Nic Borojevich led the Bulldogs offense with a game-high 21 points and Cole Mitchey added 14, including going 4/6 at the foul line in the final frame.

Newman topped Archbold with 19 (13 in second half) and Roth netted 12.