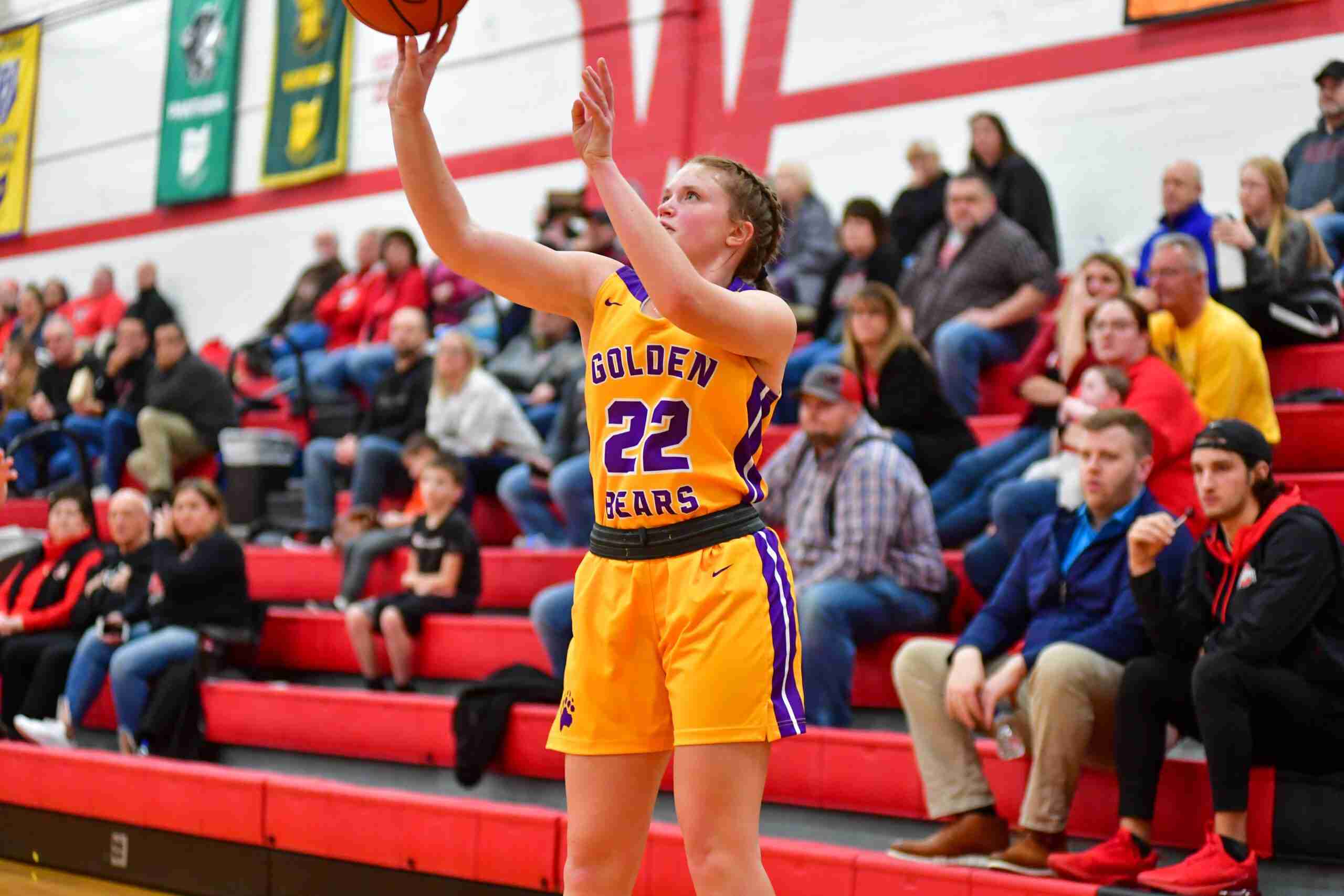 ENDING THE HALF … Addie Arnold knocks down a corner triple for the Golden Bears to give them a 22-18 lead at halftime. (PHOTO BY JACOB KESSLER, STAFF)

WAUSEON – In big games, teams look to their seniors to make big plays and that’s what Bryan received from two of their seniors in the fourth quarter of Friday night’s NWOAL showdown.

Wauseon, ranked No. 4 in Division III, had two chances in the final 40 seconds to tie the game, but Addie Arnold and Delilah Taylor turned in stellar defensive plays as Bryan escaped with a 49-45 win.

The scoring in the fourth quarter started slow before Wauseon’s Kadence Carroll broke the ice with a 3-pointer but Arnold responded with a triple to push the Bryan lead to 35-29.

Kailee Thiel then went 4/4 at the foul line for the Bears before buckets from Marisa Seiler and Autumn Pelok and a 2/2 trip to the charity stripe by Seiler cut the Bryan lead to 39-35 with 3:40 to go.

The fourth quarter saw both teams make numerous trips to the free throw line and after Carroll went 1/2 at the line the Golden Bear advantage was narrowed to 45-43 with 1:22 left.

The teams exchanged 2/2 efforts at the stripe before a Bryan turnover would give the Indians the first of two opportunities to tie the game.

Arnold turned in the first defensive play for Bryan as she blocked a Seiler shot from the left square and Reese Grothaus rebounded and was fouled with 17.7 to go.

The Indians though still had life as Grothaus missed both free throws giving Wauseon one more chance to tie the game.

It was Taylor’s turn to make a play on defense as she double teamed Seiler on a spin move in the lane and forced a jump ball giving possession back to Bryan.

Taylor then stepped to the line and went 2/2 with 5.5 seconds remaining to seal the game for Bryan. Bryan, who entered the game No.11 in Division II, went 12/14 on free throws in the final stanza and was 19/24 for the game.

Carroll and Pelok registered 12 apiece for the Indians (8-3, 1-1 NWOAL) while Seiler, their leading scorer at 20 ppg, was held to just eight on 3/13 shooting.

Wauseon started fast the game as Ellie Rodriguez opened the night with back-to-back treys and Hayley Meyer was 2/2 at the free throw line to give Wauseon a quick 8-0 lead.

The Indians offense would go cold at that point as Bryan scored eight straight points to tie things up at 8-8 early in the second quarter.

The Indians put together a 10-4 spurt to build their lead to 18-12 before a big run by Bryan to end the half.

A basket by Taylor started the 10-0 run and Arnold finished it with a 3-pointer from the left corner just before the buzzer to give Bryan a 22-18 lead heading to the locker room.

Bryan continued to grow the lead to start the second half with a field goal by Grothaus and 1/2 at the line by Ella Voight to make it 25-18.

Grothaus added a triple and after two free throws from Thiel, Bryan had their largest lead of the night a 32-23.

Pelok would get a conventional three-point play to close the quarter and cut the Bryan lead to 32-26 heading to the final quarter.