By: Tammy Allison – THE VILLAGE REPORTER

How does a 33 year old from a small town find himself performing at the John F. Kennedy Center for Performing Arts in front of the President and First Lady? Talent. Determination. And the support from his hometown of Wauseon. Robert Kerr, a 1998 graduate of Wauseon High School, is working towards his dream to be a professional opera singer.

In a recent interview by phone, Kerr shares the inspiration wisely given to him, “Someone once told me that some of the best singers come from small towns.” It’s his small town roots that he credits to the success he has experienced thus far in his young opera career. “Many of my high school teachers were influential in encouraging me to pursue the performing arts.” In fact, Kerr shares of how Mr. Broadway, WHS drama director at the time, heard him singing outside the band room and suggested he try out for Annie as a freshman. Kerr said it was then that he was hooked and “I got the theater bug.”

Other teachers left their mark as well. Deb Schnitnkey, the Wauseon Chorale director at the time, was also very influential in his decision to pursue the path of performing arts. Kerr was one of the first freshman students to make the Wauseon High School Swing Chorale. He was also very active in the speech and debate team and credits Mr. Rettig for his encouragement. 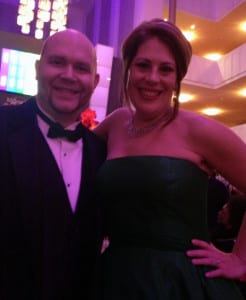 After high school, Kerr decided to attend Ohio Northern University in Ada to pursue a degree in Musical Theater. At that point in his life, theater was his love and passion. While an undergrad, he participated in plays at the Huron Playhouse. After graduating in 2002, he took a year off to figure out what direction he wanted to go next. Life took him to Columbus where he received a paid contract to sing in the Tosca Opera at Opera Columbus. His focus changed courses as Kerr says “I got the opera bug.”

With this new self-revelation, he turned to the Ohio State University for Graduate School to pursue a Masters in Vocal Performance. In 2005, after graduation, he began auditioning at various opera houses. His voice has led him to San Francisco Merola Opera where he participated in summer shows 2008, 2009, and 2010. In 2008, he auditioned and received National Semifinalist status from the Metropolitan Opera in New York City.

In 2012, he participated in a summer Young Artist Program in New York City under the direction of famous opera singer Martina Arroyo. This experience eventually led to the email he received from Bob Burmen at the Kennedy Center. The email told him that his name had been given to him by a gentleman who works with Martina Arroyo. Kerr learned that Martina Arroyo was to be one of five performers to be honored at the 36th Annual Kennedy Center Honors for their cultural contributions to the nation and world, and he had been chosen to be part of the group to sing the tribute for her during the program. Kerr remembers yelling “What! What!” at the computer screen while his young three year old son echoed “What! What!”

Kerr contacted his agent right away. Other performance obligations had to be rearranged, but Kerr felt, “This is a once in a lifetime opportunity. It was a very humbling thing. Martino has had her program for 10 years and every summer, 40-50 singers participate. To be one of 4 total chosen from the program is such an honor.”

When he was first asked to perform he was unable to tell anyone beyond his immediate family. The honorees do not know until the day of the event who will be singing their tribute performances.

Kerr was able to bring a guest and chose to bring his wife Ellen, one of his biggest fans and supporters. The couple celebrated their tenth anniversary at the event. Kerr says, “It was very surreal, why you’re there. It’s almost like being in the audience for a major awards like the Grammys.”

The day they arrived in Washington, D.C, a Cadillac picked them up for a rehearsal at the Kennedy Center followed by another rehearsal on Sunday morning. Kerr, a baritone, sang in a group including opera superstars Sandra Radvanovsky and Joseph Callja. “These people have accomplished so much. I wanted to do my best to give a great performance.” 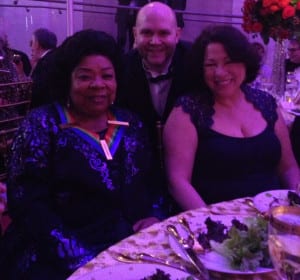 Kerr was surrounded by celebrities at the event. He had his picture taken with Snoop Dog who was wearing a red fur coat. He met legendary singer Tony Bennett and David Gregory of “Meet the Press.” At his table were not only Martina Arroyo but also Sonya Sotomayor, Associate Justice of the Supreme Court. Kerr stresses, “It was an honor and privilege to be a part of this-the opportunity afforded to me through Marina’s program. It’s not too often I get to participate in high society events.”

Kerr says the experience still feels surreal that he was part of it, but back home, he stresses, he is a husband and father first who Christmas carols with his church at the assisted living facility near his home in Canal Winchester. Kerr’s favorite audience is his 3 year old young son Isaac who listens to opera music with his daddy, smiles, and says “Daddy’s singing!”

“I’m still learning about the career-I’m a baby!” he laughs. Kerr says he has waited tables at Applebee’s, worked retail, given voice lessons, and soon will begin substitute teaching-anything he can do in between his opera performances. “I’m building my experiences and resume. As a full-time opera singer, you are never a finished product.” There are a lot of auditions, cost, risk, and sacrifice. “You have to trust in what you are doing.” Kerr believes that in order to succeed, he must be proactive, get his name out there. “I share my voice however I can. I’m still pursuing a dream to make it to the Metropolitan Opera in New York City.”

The Kennedy Center Honors Gala will be broadcast on CBS on December 29, 2013 from 9:00-11:00 p.m. Besides Martina Arroyo, the other honorees include Billy Joel, Herbie Hancock, Shirley MacLaine, and Carlos Santana. Last year, 8.8 million Americans tuned in to the Kennedy Honors program on TV. This year, Kerr hopes his hometown of Wauseon will join in as well. His hometown roots are still strongly tied to Wauseon. His parents William and Sandy Kerr, live in Wauseon. His sisters and their families live in Northwest Ohio as well. He hopes he makes his hometown proud through his accomplishments. “I feel I represent the folks who still live there. Everyone has a talent or strength. People have encouraged me. I am only the singer I am today because of other people.”

A Close Look Behind The Scenes Of Fellowship Of Christian Athletes

A Woman’s Story Of Her Selfless Son