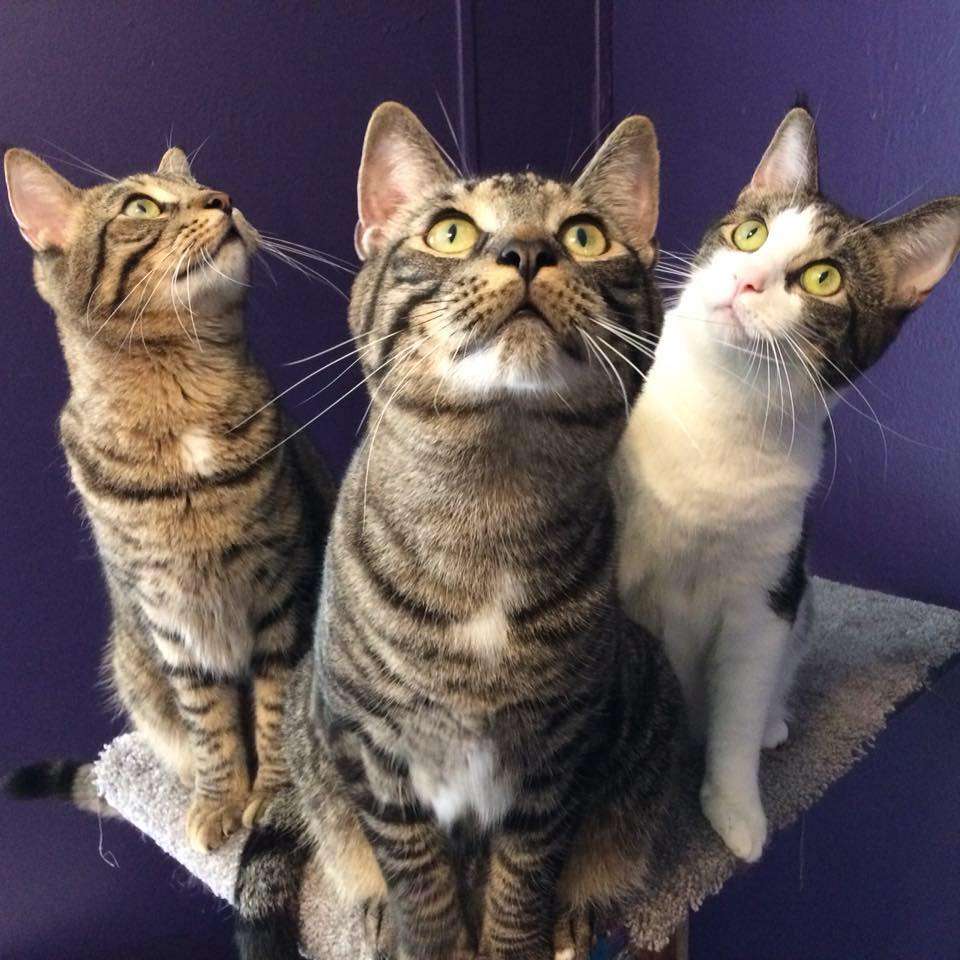 CAT RESCUE … Three cats given a 2nd, 3rd, or maybe even 4th chance at life through the efforts of Tabby Tails and its founder, Kay Banks.

In America, the problem with stray animals is actually pretty severe. There is a rough estimate of 70 million stray animals walking the streets of this country. Around 6% of those strays are dogs. However, a whopping 27% are cats.

The animals that are picked up are usually taken to shelters. But with the growing number of homeless animals reaching the point where it is, many facilities can only house so many. Unfortunately, this means that many have to be euthanized.

For some, it’s because they’re disabled and would require extensive medical intervention. For others, they’re extremely old. But more often than not, they’ve simply overstayed their welcomes.

Often times, there’s a time limit in which the animal must be sold or adopted out and if they fail to reach that goal within the time frame, which can be as many as a couple of weeks or as few as a couple of days, they’re euthanized to make more space for incoming animals. Each year, roughly 1.5 million shelter animals are euthanized, over 860,000 of which are cats.

For Archbold resident Kay Banks, this problem would wind up becoming a golden opportunity to do some serious good.

Originally living in a trailer park, Kay’s journey began with a sweet cat named Daisy who gave birth to an unexpected litter of five kittens under her roof.

While Daisy eventually passed on of natural causes, Kay kept the father and four of Daisy’s kittens, and as a result, her obsession with cats was born.

She became driven to help cats, taking in felines with disabilities and behavioral issues that their owners found themselves unable to deal with.

Blind and deaf cats, feral cats, litter trouble, etc. People with cats of all types and problems flocked to Kay, pleading for help and before Kay knew it, her tiny trailer was full to bursting with loving, affectionate, and very outspoken felines.

Before too long, her trailer couldn’t house them anymore, so Kay moved her blossoming operation to Toledo nearly three years ago.

But even this move proved to be too insignificant compared to the growing number of cats she was looking after, which quickly totaled over 85 individuals, and so Kay made the big decision to acquire her 501 C3 status, legitimizing her operation as a fully functional and legal cat rescue, which would make it easier to acquire funding and donations toward the care of her furry wards.

She also decided to purchase an old, mostly abandoned elementary school building in Milton, Ohio, which used to be the Bowling Green Elementary building.

This building, which has seen several previous owners, and whose plumbing is in rough shape, is to serve as the headquarters for Tabby Tails’ operations. It’s still in mostly great shape, which is a relief to Kay, who is excited for the cats to have their own massive spaces to play and interact.

One of Kay’s biggest prides for her business is the very idea that her cats aren’t confined to cages like in most shelters.

She said, “They do so well in a community-type setting, and you get to really see their personalities more as to opposed to when you, when you cage a cat, you kind of just have to guess, like do they like other cats by showing them another cat, or do they like dogs by showing them a dog, but here, all the cats are raised without cages.”

Kay stresses that this cage-free roaming environment, which she has always employed with the cats she takes in, allows the cats to better socialize not only with one another, but also with the people who come by to see them.

Naturally friendly cats will flock to eager visitors to beg for attention, while more reserved cats can keep their distance and observe at their leisure, which allows potential adopters to see more accurately what each cat is like in a more natural setting.

Kittens and sick cats are kept separate from the main colony for their own safety, and Kay intends to set aside two rooms in the back for FIV and FELV positive cats. FIV or Feline

Immunodeficiency Virus and FeLV, or Feline Leukemia Virus are both diseases which are only found in cats, and while communicable between them, are slow to spread and require treatment. Neither disease is curable either, requiring affected cats to be kept separate from any cats who test negative for them.

Kay is hopeful that the new Tabby Tails building will be up and fully operational by the end of the year, and that she can start attracting volunteers to come in and assist her.

The entire operation is non-profit, functioning solely for the benefit of the cats that Kay brings in.

This is especially vital for special trips she makes to shelters across the Midwest, particularly to Kentucky where kill-shelters are distressingly common.

“They have bad kill-shelters down there, and I’ve gone down there a few times, now and basically come up with a carload of cats, and they’ll only give me a couple of days, they’ll tell me ‘hey, we’re gonna euthanize these cats tomorrow if you don’t come and get them’ and I just go down and I’ll get like a whole truckload of cats.”

During situations like these, Kay does her best to take as many cats as she possibly can, unable to bring herself to leave any behind, knowing they’ll be put to sleep the next morning otherwise.

Kay was able to rescue Feather and her family and transport them to the safety of Tabby Tails.

Public outreach is so important when it comes to non-profit animal rescues and for Kay, the upcoming move to the old school building means the difference between struggle and thriving.

She’s looking forward to watching her family of furballs grow and play in the massive cafeteria space she’s outfitting as a cat colony, as well as welcoming human visitors coming in to adopt a new furry family member. The cats are all available for adoption at $50 for an individual, or $75 for a pair.

But Tabby Tails doesn’t just provide pets to families, it provides hope and a future to otherwise hopeless cats of all kinds.

Even non-sociable feral cats have a chance under her roof, whether they come around to people or not. And with a fantastic organization run by one of the most dedicated of cat-lovers, Tabby Tails can only rise skyward from here.