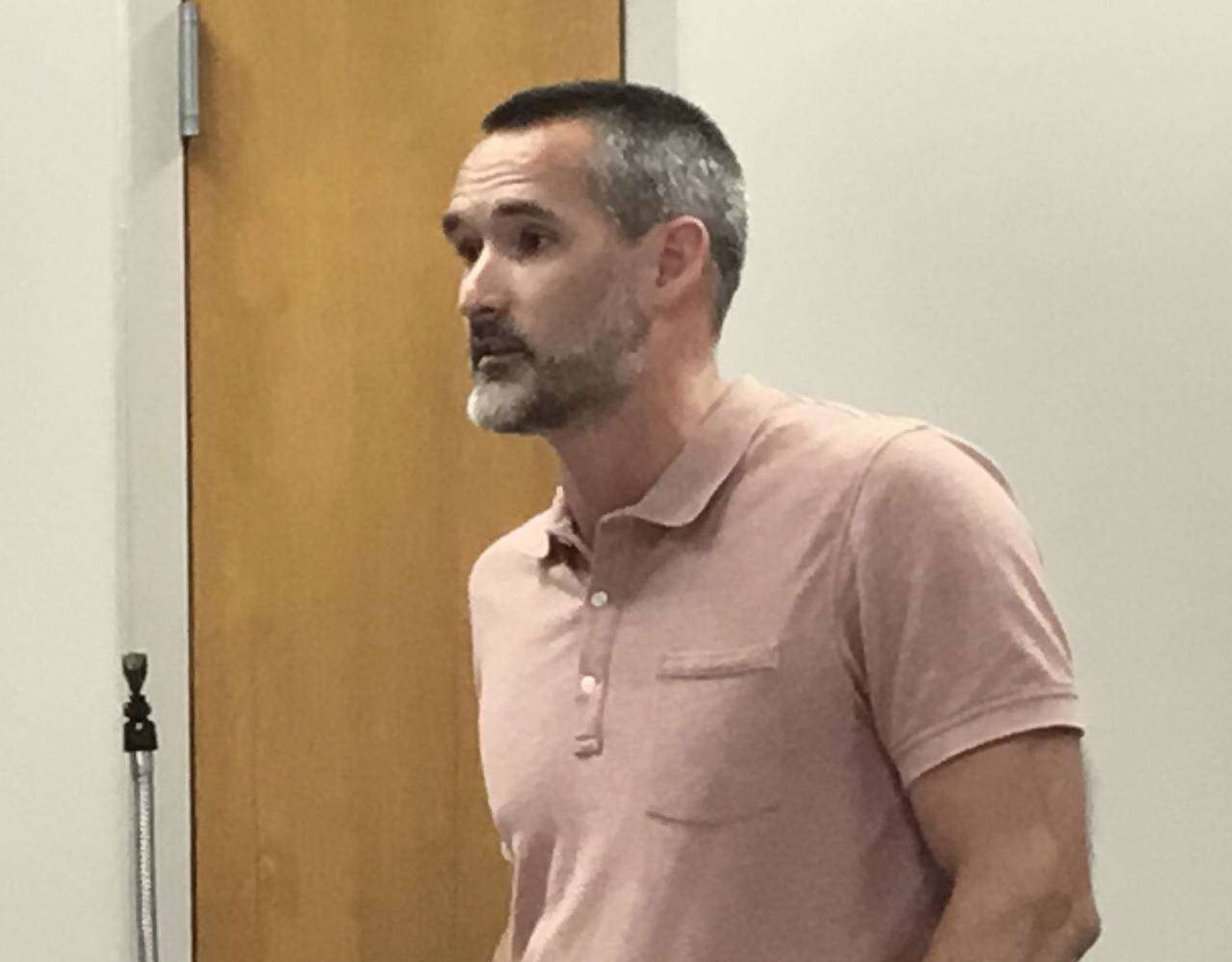 RED RAMBLER PATIO … Brent Shea, owner of Red Rambler Coffees, addressed the Wauseon City Council concerning his hopes to be able to serve alcohol on a newly fenced in patio area. Council voted to approve a motion for this new freedom for the business. (PHOTO BY REBECCA MILLER, STAFF)

The first Wauseon Council meeting after Council member Jeff Stiriz passed away suddenly from a heart attack, was held on June 21, 2021, with the Moment of Silence prefaced with loving comments by Mayor Kathy Huner and President Shane Chamberlin.

Both Huner and Chamberlin, who served with Stiriz for the past nineteen years, shared memories and said he will be greatly missed. Council member Scott Stiriz, Jeff’s brother, also shared a short humorous thought and informed Council Clerk, Brooke Baumgartner, that she does not need to say his first name anymore when calling for votes.

Jeff’s humor, his love for family and his faithfulness to the community of Wauseon were all mentioned during the comments. It was clear that he will be missed.

Following the approval of the minutes for the June 7 regular meeting and the June 17 Committee of the Whole meeting, Council moved directly to the portion of the meeting in which visitors can address them.

Brent Shea, owner of Red Rambler Coffees/Ramblin’ Red’s Brewing Co., spoke with council about a fence that they have put up to make a patio and that they would like to be allowed to serve alcohol outdoors there. The area will seat sixteen and allow for a pleasant atmosphere during the summer for alcohol consumption.

Council voted later in the meeting, to approve a motion “to authorize the mayor to send a letter to the Ohio Department of Commerce Division of Liquor Control indicating that the City does not object to the sale of liquor on an outdoor expanded patio area at the Red Rambler located on 1493 N. Shoop Avenue.” Shea thanked council for their approval.

In Committee reports, Councilor Steve Schneider gave a brief summary of the Wednesday, June 9, 2021 Finance Committee meeting. He shared the two recommendations form the committee and Council voted to approve both.

The first will allow the Bond to be refinanced for the Glenwood Project and the Napoleon Waterline notes. Through this refinance, the city will be locked into a 1.53% interest rate, as opposed to the current variable interest rate of 4%-to 4.5% for a total savings of $140,000 over the next ten years.

The second recommendation would allow a budget amendment to increase the Capital Street Light Account an additional $29,500 for the street lights by Haas Door.

It will also increase the professional service account by $6000 to pay for the Zoning/Maintenance Code Inspector.

They also planted 20 trees at Homecoming Park, consisting of ten Pin Oak Trees and ten Chestnut Trees, as well as some wildflower seeds.

The installation of two new signs has taken place at Indian Hills and the committee discussed potentially removing an Oak Tree limb or tree at Imagination Kingdom as it is split and is hollow and might be a safety hazard. The tree committee had no recommendations which required a vote at council.

Legislation approved, besides the motion for Red Rambler, included:

-Resolution 2021-9 Accepting the recommendation of the revolving loan fund committee; authorizing the Mayor to enter into an agreement with Pam Seiler (for a loan of J&B Feed Co.), and placing it on final reading.

-Resolution 10 to Amend ordinance 2020-11 annual appropriation ordinance by authorizing the director of finance to increase or decrease certain line account appropriations within the various funds listed within the year of 2021, and placing it on final reading

-Ordinance 2021-5 for the issuance and sale of bonds in the maximum principal amount of $1,780,000 for the purpose of paying costs of refunding at a lower interest cost certain of the City’s outstanding street improvement bonds, series 2011, dated May 26, 2011, and declaring an emergency.

-Ordinance 2021-6 providing for the issuance and sale of bonds in the maximum principal amount of $225,000 for the purpose of improving the Municipal Water Treatment Plant by constructing an additional treatment building and lagoon, acquiring additional treatment tanks, a high service pump and additional piping and making other necessary improvements, together with all equipment and appurtenances thereto, and declaring an emergency.

-Payment of the bills

Council went into Executive Session to discuss the purchase of sale of property, and with no action taken, the council meeting adjourned at 5:45.

Rebecca can be reached at publisher@thevillagereporter