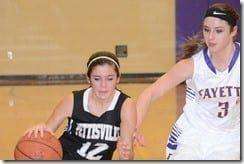 FAYETTE: JANUARY 16, 2014 – The Lady Blackbirds of Pettisville entered January 16’s match up with conference leading Fayette hungry for a statement victory, and when the final seconds ticked off of the game clock, it was mission accomplished.  Pettisville walked off the court with a 54-38 victory in a game in which the Lady Blackbirds seized the lead from the opening tip-off and would not relinquish it throughout the game.
Leading the way for Pettisville was Mikala Avina, who had a game high 22 points on the night.  Jordyn Purcel contributed 11 in the victory along with Dana Fricke’s 8 points.  Lauren Hostetler dropped in 7; Audra Klopfenstein chipped in 6 rounding out the scoring for the victorious Blackbirds.
According to Head Coach Jason Waladvogel, “It was a tremendous effort by the whole team on both ends of the floor. Makala Avina, Audra Klopfenstein and Jordyn Purcel really stepped up.  Our bench with Kate Kauffman, Amber Sauder and Amber Klopfenstein made a great difference for us tonight.”
As a team, Pettisville out shot Fayette from the field 50 percent to 31 and shot 67 percent from the free throw line.  The Lady Blackbirds also out-rebounded Fayette 20-15 and committed 11 turnovers on the night.  The victory for Pettisville moves the Lady Blackbirds to 12-2 on the season, and 5-1 in the BBC.
For the Lady Eagles on the night, Kaela Seiler led the way with 13 in the game followed by Taylor Griffiths, who had 12.  Paige Keefer chipped in 5; Jessie Wheeler had 4 while Katelyn Bates and Alexis Fruchey each had a bucket in the loss.
With the loss, Fayette falls to 10-2 on the season and 5-1 in the BBC.
SCORING BY QUARTER: