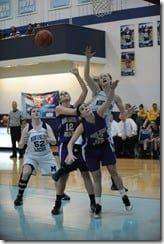 Loco and Golden Bear players scramble for the ball in a hard fought NWOAL contest on January 16.

MONTPELIER: JANUARY 16, 2014- The Montpelier Lady Locomotives played host to conference rival Bryan on January 16, falling to the visiting Lady Golden Bears 55-36.
In the loss for Montpelier, Baylee Hageman led the way with 10 points on the game while snagging 4 rebounds and 3 assists.  Hannah Blake dropped in 9 points along with 3 boards and an assist while Maddie Richmond contributed 6 points and a rebound.  Malorie Yagalski had 3 in the game while also recording 3 rebounds; teammate Bre Stein had 3 points along with a rebound.  Marinna Mercer had a bucket while coming up big on the boards with 7 rebounds in the game.  McKenna Quaderer chipped in 2 points and Landry McKelvey rounded out the scoring for the Lady Locos with 1 free throw made on the night.
SCORING BY QUARTER: