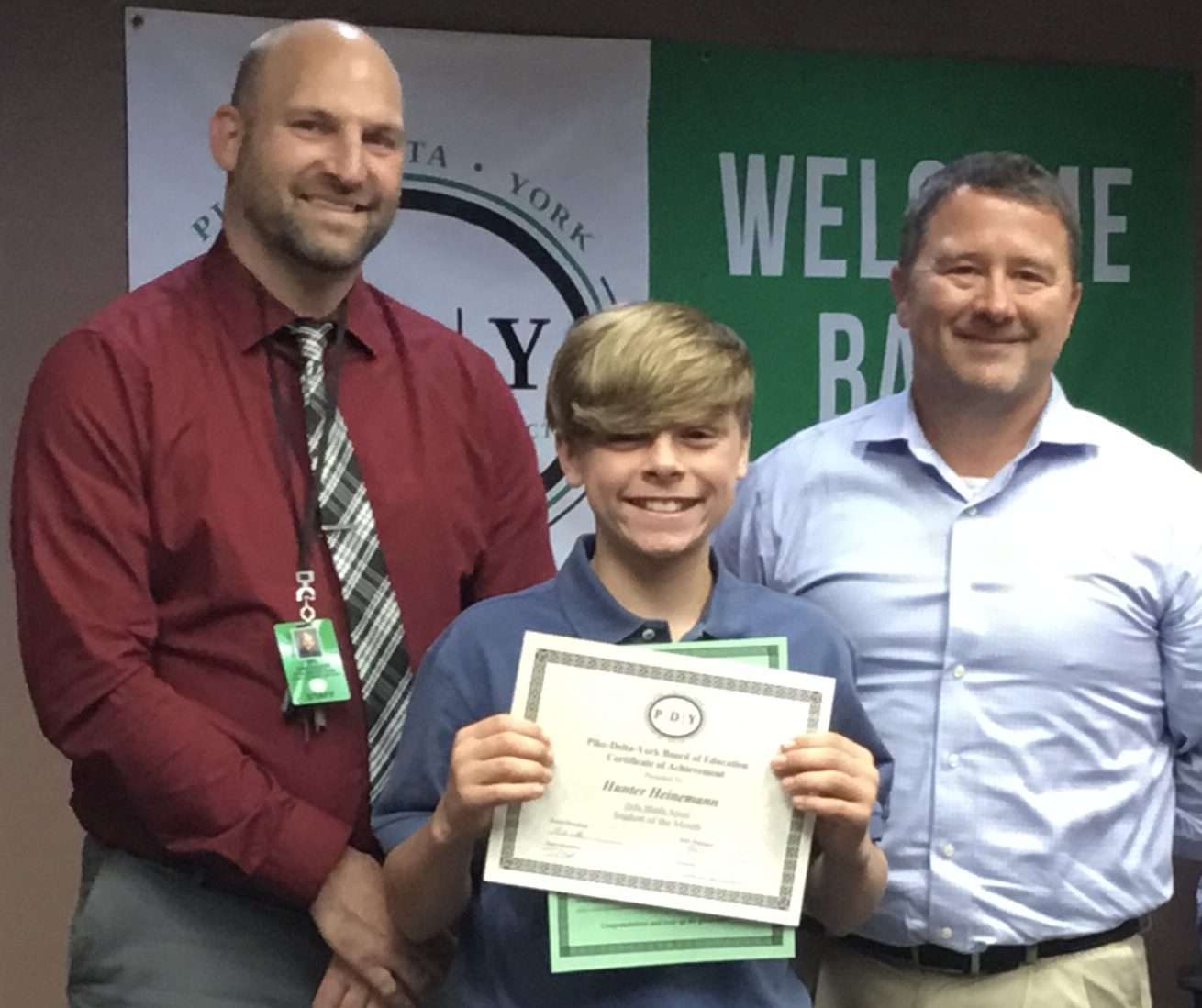 HUNTER HEINEMANN … The Delta Middle School Student of the Month award for October 2021, went to Hunter Heinemann, was read by his Middle School principal, Mr. Pete Nafziger and presented by School Board member Mike Ford. (PHOTO BY REBECCA MILLER, STAFF)

Delta School Board president Michael Mattin called the October 20, 2021 meeting to order amidst the sounds of children. Little siblings along with their parents to witness their older siblings being given recognition, were present for the first half of the meeting.

Following the presentation of awards, the Board went on to welcome other visitors and allow anyone to speak who was present to do so.

Delta Village Council member, Anthony Dawson, said that he wanted to say he appreciated that some of the board members and others came out for the Village Council meeting that week to speak out against the sale of marijuana in the village. He said he was surprised by the number of people there.

His question for the Board was, “Since you guys are so active against that stuff, I was wondering if you are going to go back to having drug tests in school again.”

A number of the Board members and Superintendent Ted Haselman expressed that they are not aware that the school ever had mandatory drug testing, but following a discussion it was determined that they will check into the history of the school and find out before the next meeting if it was or not.

He asked if they are going to have that conversation and Mrs. Alice Simon stated that it had not been considered but now that he had brought it up, they would have the conversation.

Treasurer Matt Feasel gave his monthly report which was approved by the board, and then Superintendent Haselman made his personnel recommendations:

-Homebound Tutor – Jeff Mazurowski for a student with medical needs

In other Board Business, they voted to approve a Resolution of Settlement Agreement with the Village of Delta, Ohio related to income tax revenue sharing in connection with CRA (Community Reinvestment Area) Tax abatements.

Reports were given by all three building principals. Elementary Principal, Ellen Bernal, began by sharing the Star and Dibels assessment, and said that due to covid and so many children not making it into preschool last year, the Kindergarten level has more in the red than usual. Other items she shared were:

-On October 1, the district had it’s Professional Development Day with each building meeting with Margaret Searle to learn more about MTSS. The Elementary also worked with a representative from DreamBox to look at student data from their DreamBox program.

-Red Ribbon Week is the week of October 25. A team has put together some fun activities for the students to participate in throughout the wee. The is Really Excellent Decisions and the focus will be on healthy life choices.

-A group is working on organizing a school wide Hour of Code to take place in December, with speakers “to speak to the students about ways technology and coding affect their careers.” There will be grade level appropriate coding activities.

-Panther Pack started and there are 29 students attending. This is the last year for this grant so they are working to re apply.

-The Building Leadership Team will meet on November 18.

-National Voter Registration Day will be recognized by the use of age appropriate lessons and an opportunity to vote on ice cream flavor.

Principal Bernal also spoke about the difficulty of finding substitutes this year. She said the staff has stepped up and helped to cover classes.

Middle School Principal, Pete Nafziger, gave an enrollment update, saying that they have added 27 new students since school started. There are now 373 middle schoolers. He reported:

-they have acquired and are hanging signs in hallways and common spaces related to school initiatives and behavioral expectations, as well as a floor sticker roundabout for foot traffic for the academic wing hallway. They are currently using class meetings to teach proper hallway conduct and using the roundabout.

-The School wide Fundraiser concluded on September 29 with the Incentive day, The Day of Awesome, taking place eon October 12. Over $25,898 was raised and the money is used primarily for class experiences, like 6th Grade Camp, 8th Grade trip, Field trips, etc. Any unspent money travels with each student to High School.

-Fall Spirit Week was the week of September 27 and ended with a Pep Assembly on the 30th.

-Parent Teacher Conferences were held on October 6 and 11, in person and on the phone. 89.9% of the conferences scheduled were held.

-The 6th grade class just completed their annual canned food drive and Mrs. Schaffner and the Cross-Categorical classroom will be operating the Panther Pantry.

-They are continuing class meetings with each grade level, which will focus on the theme of “Better Together,” class and school issues and teaching behavioral expectations.

-They are meeting weekly in Teacher Based Teams on Fridays for Data meetings, in which teachers interact with specific student academic data to plan next steps for instruction as part of the Data-Driven Instruction Initiative.

-6th Grade Camp will not be until March

-They are planning a team building experience of some kind for the 7th graders who missed out on camp due to COVID last year.

-Rakin’ the Town will be held on November 6

-Building Leadership Team will meet again to plan some important initiatives for the year and beyond.

-Events for December through May were also mentioned

Instant alert was sent out to parents letting them know midterms are posted online. Homecoming was successful.

Juniors testing has been completed and PSAT was available for those who wanted to take it. District Professional Day was held and Parent Teacher conferences were held with only 24 no shows.

He complimented the students and staff for handling a power outage on October 20. He said that he has had compliments about the students from the school photographers and the Board of Elections.

He shared about the Fall Sports wrapping up and getting ready for winter sports. The Building Leadership Team met and focused on the At-risk students and how to best support them. He felt that the Fall Fest was a great success, “nailing it” for bringing the school and community together.

School board member Mike Ford suggested that they send messages of support to the area schools who are dependent on the passage of their levies to survive.

He said he wants them to know “we wish them luck.” Tammy Sprow thanked everyone for all they do outside of their classrooms. “Thank you for being available.”

With no Executive Session needed that night, the meeting adjourned at 7 p.m.