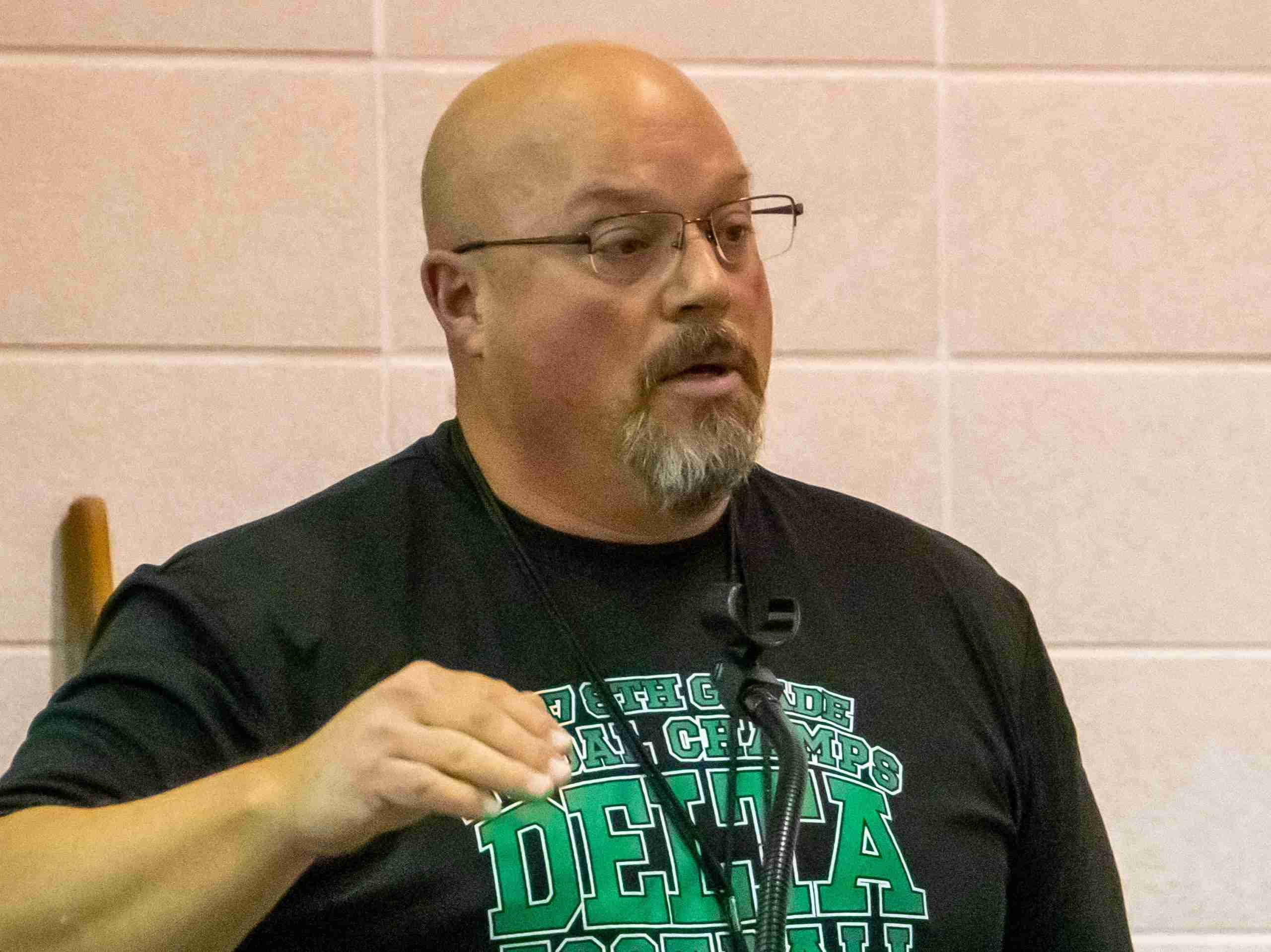 QUESTIONS ABOUT COMPENSATION … Scott Tenney, who is the PDYEA President, speaks to the board regarding school contracts for PTO and coaches pay. (PHOTO BY JACOB KESSLER, STAFF)

The Pike-Delta-York School Board held their meeting on Wednesday, November 17th. The meeting was called to order at 6:30 p.m. followed by the Pledge of Allegiance and roll call. Minutes for the previous meeting that took place on October 20th were then approved.

In correspondence, the School Board President Dr. Mattin informed everyone that was present that he had attended the Delta Village Council meeting on Monday, November 15th.

He spoke to council in order to convey the effects Pre-94 tax abatements have on the school district. An invitation was extended to those on council to discuss the districts position on the abatements.

The boys’ soccer team was also recognized for their first NWOAL and Sectional Championship. In public participation, Scott Tenney, who is the PDYEA President, addressed the board with concerns.

He first thanked everyone for their support for his father passing away recently. An issue was then discussed regarding contracts for sick leave and coaches.

“In this last contract we have an attendance incentive. And we also have a thing were if you miss so many days you can be put on an attendance plan.”

“I don’t know how other places of employment are but we only have one group, everything goes into a sick leave pile. And if you use it if you’re sick, your kids sick or for a bereavement day it all comes out of that leave.”

“The State of Ohio says state employees gets three days that should be classified as bereavement and wouldn’t come out of your sick time.”

“Again, this has never been an issue here but now that we have an attendance incentive, if those days are classified as sick instead of bereavement, then that would impact a person and make them not eligible due to attendance,” said Mr. Tenney.

He then went on to say that there are other areas of dispute with contracts that have not been addressed and gave an example.

“Coaches pay, the contract says you get half of your pay halfway through the season, and you get the other half at the end of the season. Well Fall sports have been done since Mid-October.

Not one High School Coach has been paid, because now they are saying you have to go through the Athletic Director and other things but none of that stuff is in the contract. So, is it an interpretation, or is it what the contract says?” continued Mr. Tenney.

He then continued on to show examples of sports teams having more than one coach for some sports but not for others. “What are the consequences of that? Golf’s not like Cross Country or Track.”

“They don’t go to the same place and compete at the same time. There are times where this teams here and that teams there.”

“This teams competing, this teams at practice. You have one coach; how does that happen? Your keeping kids unsupervised and you’re telling them that they’re not worth a coach.”

The Treasurers report then followed after with the monthly financial report for October and the Five-Year Forecast being discussed and approved.

Members of the board then discussed and asked the Treasurer about coaches pay and when they would be seeing their money.

Discussion then followed between Mr. Tenney, the Treasurer and members of the board regarding contract timing and pay. It was stated that coaches do not get paid until the end of the season and that football just recently ended.

If tournaments come up then it is not yet the end of the season. The coaches also have to make sure that all equipment and uniforms are turned into the athletic director.

Mr. Tenney then explained that in the contracts it does not state that if a team goes on to play in tournaments, that their pay is not sent until the games are finished.

“The end of the season, according to the contract is when your last regular season game is played, based on the OHSAA calendar. That’s what it says right there in the contract. Post season doesn’t count.”

“When we make the playoffs or when we go to state we don’t get paid extra. We love doing it but you shouldn’t have your pay withheld,” said Mr. Tenney.

The Treasurer was then asked to follow up with an email sent to the board with who has and has not yet been paid for the Fall coaching staff and that the issue would be further discussed.

The Superintendent then proceeded to give his report with personnel items being discussed and approved. A service contract for a speech pathologist and an Asynchronous Remote Learning Day was also approved.

Lastly, the board approved a declaration of impractical to transport for St. John’s Lutheran and Monclova Christian. The board then moved to enter into executive session followed by adjournment after returning.