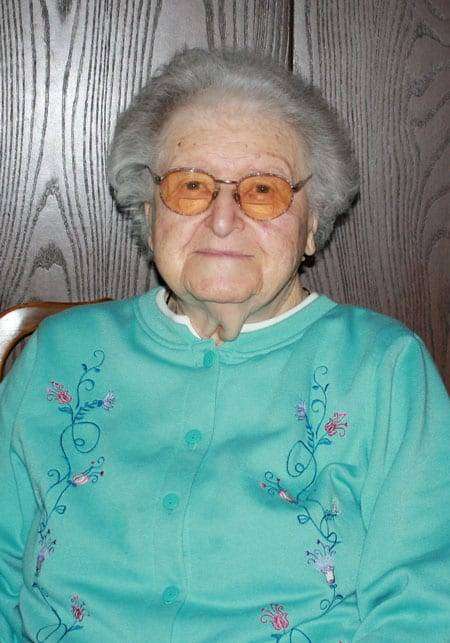 The date was December 8, 1915. President Woodrow Wilson was midway through his first term in office, and the United States had yet to enter what would become known as World War I. The Ford Model T, the most influential and popular car of the 20th century, had been in production for seven years, but in the farm country of northern Williams County where Ramona Lucille Luce Heinzerling was born on this day, the chief modes of transportation either involved a horse or one’s own two feet. As she approaches her 100th birthday, Ramona reflected on her life to this point.

Ramona is the daughter of George and Thelma Joice, and the elder sister of the late Rowena Mann. She was born at the house currently occupied by Norman Coles at 4377 State Route 107. “It’s a big, square house,” Ramona said. “I was born there. You didn’t go to the hospital in those days. In that day and age, it was all horse and buggy.”

Recalling her youth on the farm, Ramona said, “We raised almost everything that we ate. We would go up to the grocery store every once in a while to buy a few staples, but we had our own meat. We had our own potatoes, our own vegetables and fruit. Gardens were the thing.”

Ramona graduated high school as a member of the Edon Class of 1932, and began attending classes at Bowling Green State University to attain the license for her lifelong career as a teacher. The world was already three years into the grip of the Great Depression, and the following year, the financial morass of the times struck the university.

Ramona remembered, “I graduated from high school in 1932, and the depression was pretty bad at that time. My first year in college was deep into the depression. In March of 1933, the banks closed. Nobody knew what was going to happen. If you had money in the bank, you couldn’t get it, but nobody had very much money anyway. The college administration called a meeting with the student body. The thing that I remember hearing them say was, ‘We don’t know what’s going to happen, but we’re going to keep right on with our classes. You will attend classes as usual.’ I was living in a home; I wasn’t living in the dormitory. I was living in a private home, and there were twelve girls living in the home…it was a big house. The landlady called a meeting of the twelve girls, and said, ‘If you don’t have food, we have some in the basement, and you are welcome to use the food.’ I never used any of the food. That’s the kind of situation that we were in. If you don’t have money, how can you get any food? I remember it very well.”

In the early 1940s, Ramona began her teaching career in one of the old township schools called Valleyview School. Although it finally fell to repeated vandalism a couple years back, most of us are familiar with Ramona’s first schoolhouse as the ‘Bomber Barn’ on Route 107.

World War II brought Ramona together with her first husband, Edward Luce. “I was a USO Club Director in Blackstone, Virginia,” she recalled. She worked with the USO for two years, and met Edward in 1945. “The club in Blackstone was close to a military base called Camp Pickett, but since then they’ve called it Fort Pickett. He was one of the soldiers that came into the USO club for recreation, and to have someplace to go to get away from the Army post. He was from Delaware. We got married before he was discharged. I was still working in the USO, but I was out in Kansas. After he was discharged, and I was no longer working in the USO, we came back here.”

Returning to Northwest Ohio, the Luces set up their home in Delta. “There was a service station in Delta that he had heard about, and he wanted to work there,” Ramona said. While living in Delta, she taught school in Wauseon, prior to the Luce’s moving back to Edon, where she taught for another quarter century. After closing her career as an educator, Ramona became the librarian at what was then called the Four County Joint Vocational School, which is today known as the Four County Career Center. Edward and Ramona raised two sons, Mick and the late Jerry Luce. Mick and Jerry gave their parents daughters-in-law Connie Luce and Jo Ann Luce, along with three grandchildren and four great-grandchildren. Although she is no longer able to serve at the level she would like to, Ramona remains a faithful member of the Edon United Methodist Church. After the passing of Edward on November 11, 1964, she married Louis Heinzerling, who passed away at the age of 81 on February 19, 1995.

Having a century of life experience under her belt, Ramona is a treasure trove of wisdom for the young and not-so-young of today. She encourages the youth of today to strive towards independence and self-reliance. She also encourages the youth of today to use their imaginations more, which in the vernacular of today means put the smartphone down for a while. “Learn to be independent. Take care of yourselves, and do not rely on outside influences,” she said. “I was alone a lot when I was a kid. Of course I went to school, and there were a lot of other kids there, but I was six years old before my sister was born, so I spent most of my time by myself, and I had to think of things to do. I used my imagination quite a bit. We had quite a lot of trees in our front yard, and I can remember that I had somebody living in each tree…imaginary people. I would go from tree to tree, and I would visit these imaginary people that were living in these trees.”

Ramona’s family will be gathering with her to celebrate the occasion of her 100th birthday on December 6. A card shower is planned for the occasion as well, and cards can be sent to 405 Walz Street, Edon, Ohio  43518.

On behalf of the staff and management of the Village Reporter, Happy Birthday, Ramona!