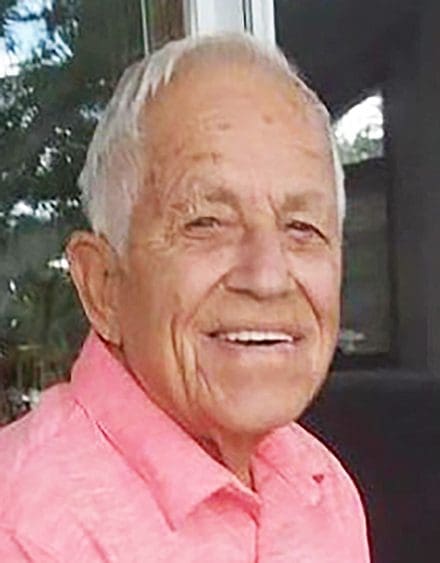 Richard “Dick” Warren Turnbull Jr. (79) of Wauseon , Ohio peacefully went home to be with the Lord on Wednesday, November 23rd.

The last 2 weeks of his life were spent at CHP inpatient Hospice Center in Defiance surrounded by his family, friends and loving wife of 53 years.

He grew up playing and creating havoc with his older brother Donald (Zoo Boy) and protecting and picking at his younger sister Barbara (Boogie).

He attended Wauseon High School and was a member of the wrestling and football teams. Dick’s junior year his football team earned the title of NWOAL Champions with a perfect 9-0 record.

Dick wore no. 17 and played Offensive Guard, in his position he “did all the work” for the “Glory Boys”.

He attended Kent State University and earned a degree in business. Dick worked to put himself through school leaving for some semesters to work at Northwest Ohio Silo Company.

His social life flourished at Kent State, as a member of the Collegiates. Dick and friends were known to keep Rocky’s lively with all of their Shenanigans.

While at Kent State, Dick was set up on a blind date that later became his wife, Linda. Dick and Linda were married on August 2nd, 1969.

They moved around finding homes in Louisiana and Germany while Dick was serving in the Army.

They had their first child (Jennifer) while living in Germany. After Army life Dick and Linda settled in Wauseon.

Dick continued to work at the silo company and eventually became co-owner. He helped to build many of the cement silo’s in the Northwest Ohio area and throughout the Midwest.

He passed on his love for water and waterskiing to both of his children and taught them to love Michigan football. Dick found a second home at Marble Lake.

There he could be found meticulously caring for his boat, exploring the channels, riding his Sea-Doo and at least yearly saying hello to the marine patrol officers.

Dick’s final role was that of Proud Papa. He loved his grandchildren fiercely and was an ideal role model for them.

The last several years Dick was adopted into the Tree Lakes family in Palmetto Florida.

In Florida he enjoyed more swimming, breakfast with the guys, hanging out at the beach, and becoming King of the Shuffleboard Court, winning 3 tournaments with his partners

Dick taught all that knew him some valuable life lessons. He was patient beyond measure. He did not take life too seriously and could always find joy in what he was doing.

Visitation for Richard will take place on Tuesday, November 29, 2022, at the Edgar-Grisier Funeral Home from 5pm to 8pm. A funeral service will be held on Wednesday, November 30, 2022, at the Christ United Methodist Church in Wauseon at 11am, with Pastor Rex Stump officiating. Burial will follow at the Wauseon Union Cemetery.

In lieu of flowers, the family asks that memorial contributions be made to The Alzheimer’s Association, CHP Defiance Inpatient Hospice, or the Christ United Methodist Church in Wauseon. Online condolences may be offered to the family at www.grisierfh.com.

The Edgar-Grisier Funeral Home of Wauseon is honored to serve the Turnbull family.

The obituary for Richard was lovingly prepared by his family