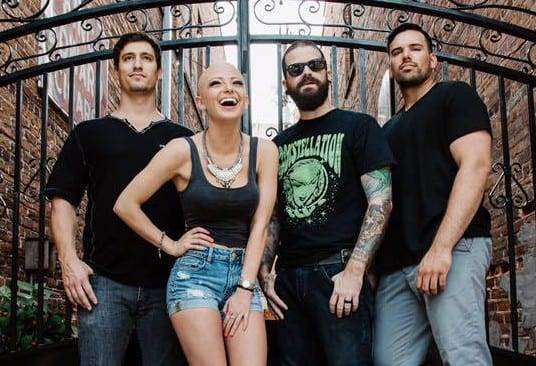 What began with singing in her school choir and church praise team has blossomed into a consistently rising climb in the Country Music scene for Danielle (Dani) Dease. Dease, who is the 19 year old daughter of former Montpelier resident, Jodee Husted and David Dease, and niece of Ohio Secretary of State Jon Husted, has always had a love for music.

Dani, a life-long resident of Rock Hill, South Carolina, “officially” began her career at 12 years of age performing a New Year’s Eve party for about 100 kids at Kate’s Skating Rink in the her hometown. This pre-teen performance helped develop her love and aspirations to be a professional recording artist. “For years after that party younger kids would tell me that I was their first concert! It felt great to touch lives through music.”

Dani went on to provide a more in-depth description of the early days of her career. “I have always been interested in music and singing. Growing up I always sang in church and at festivals. I participated in the American Talent Showcase as a side hobby. The event involved modeling, singing and dancing.” Dani got her first real singing deal at the age of 12. “I got signed to a record label close to my hometown in Charlotte, North Carolina. That led to my first album in 2011, titled “Secret Admirer”. It was the first stepping stone in what got me started in my career.”

A few years later Dani met Julian Sundby and eventually signed with his label Sunjewel Records. She described what that meant to her career emergence. “At the age of 16 was when I really began to take things serious with music and make it become a career. I love connecting with the audience and to have the power to make them feel good/happy is what makes me happy.

When asked who her musical inspirations were, Dani gave credit to several current popular artists. “Musically my influences were Carrie Underwood, Demi Lovato, and Ariana Grande. Their voices are phenomenal. I have also always been a big fan of Adele.” Dani also noted that she has been fortunate to work with some very talented people and credited them for helping her get to where she is today. “Kent Slucher and James Cook from Luke Bryan’s band played the majority of the tracks for my previous album. I also am working with producer/guitarist, Darin Favorite, who has worked with many other talented artists.”

However, just when it seemed that all was going well, both in her life in general and her music career, things took an unexpected twist.

Suddenly Dani starting losing her long, gorgeous hair. A trip to the doctor resulted in some traumatic news. She was diagnosed with Alopecia, which is defined as an autoimmune disease, in which the immune system, which is designed to protect the body from foreign invaders such as viruses and bacteria, mistakenly attacks the hair follicles. This can lead to hair loss on the scalp and elsewhere. In most cases, hair falls out in small, round patches about the size of a quarter. In many cases, the disease does not extend beyond a few bare patches. However, for Dani the news was even more devastating as she was identified with Alopecia Universalis, which is the total loss of hair on the scalp, face, and body. According to the American Academy of Dermatology, this form of Alopecia only occurs in 5% of persons afflicted with the condition.

Given this news, many would only look at the negative side. Dani, however has taken the situation and made the most of it. “It wasn’t until I had already lost half of my hair that I found out I had alopecia. I had a tiny bald spot on my hairline in April of this year and by the end of May I decided to donate the rest of my hair (about 30%) and start all over.

When asked how she felt about the condition and its effects on her, Dani made her optimistic outlook evident. “Of course, nobody wants to lose all their hair involuntarily. I had so much hair, and was often known for it. It was devastating. Especially with the lifestyle of always being in the public eye or being up on stage performing. Alopecia is strictly just hair loss, and unfortunately mine was induced by stress. There have been some successful cases where the hair grows back in, but I have Alopecia Universalis, which is the worst form. I do have hope that it will come back someday, I just need to chill out! Haha! It has been positive and negative. The negatives are obvious; lack of femininity, stares, and not being able to do anything different with it or dress it up. However, I believe the positives outweigh the bad. I feel like I can be a role model or someone to look up to for people that may have similar insecurities. I want girls (and boys) to know that it is okay to be different, and we don’t have to cover up our “flaws” just because society thinks we should. I want people to believe in themselves and for them to know there is always hope and I want them to feel comforted by my choice to go ‘wig-less’.”

The sudden onset of Alopecia had a challenging effect on her music career as well. Dani explained. “My music career took a sad halt over the summer due to my condition. Fortunately, it is picking right back up and I am slowly, but surely, getting back on track. My album is on iTunes titled “Born To Live” and I am hopeful to play more shows in the very near future.” Her plan to get back in action is in full force as on November 29, she performed the National Anthem prior to the start of both the Women’s and Men’s Basketball Games at Florida SouthWestern State College. On December 3rd, she and the band performed at the Florida Everblades Hockey Team Pre-game Tailgate Party. After taking some time off over Christmas break to be with family and friends in Rock Hill, Dani indicates she will hit the ground running with plans already set for events that will include shows, radio tours, and benefits. She explains what each event means to her. “As of now each performance in my mind is a big performance, each one exceeds the last. So it’s always changing!”

While busy with her musical career, Dani is also focusing on her education. Now in her third semester of her second year at Florida SouthWestern State College, in Fort Myers, Florida, Dani is following her dream majoring in Music. When asked what challenges she faces in her career besides dealing with the Alopecia, Dani shared, “Honestly balancing life out is probably what caused me to stress out so much. It was a lot to handle. School is already tough enough, especially taking so many classes and music degree requirements are no joke. Right now I am taking things as they go. ‘Go with the flow’ is my temporary motto. You never know where life is going to take you, so stressing about making sure everything goes a certain way is not healthy. I learned that the hard way!

Although her education and her musical career take up most of her time, Dani does have other interests. When asked what those were, her sense of humor shined. “Sleeping and eating. Whenever I’m not doing homework or practicing/performing, sleep is my favorite thing and I am a food enthusiast. My tiny body might not show it but I eat like a pig!” She also makes sure to set aside time for her family and friends.

“Obviously, music is very important to me, however, so is my family who are my biggest fans. Other than family, music will always be my first priority no matter what. If I ever was offered to play/sing somewhere I would take it. My family is my greatest support system. I honestly don’t know where I’d be without them. Being so far away from them at FSW (over 600 miles) has really made me cherish them and their company so much. They have helped me through every obstacle life had to offer.

As anyone can see, Dani is determined to take her education, and her music career to the next level in spite of any obstacles that may arise. There is no doubt this young rising star will continue to climb the charts in the days, months, and years ahead. However, no matter how large a star she becomes Dani remains grounded. She sums up her philosophy like this, “I want to touch listener’s lives one person at a time.

Whether it is a festival for 10,000 people or a showcase for 20, I love sharing my music and creating memories. I’m a small town girl ready to take on the world. I grew up in Rock Hill wanting to sing and entertain audiences around the world. My debut album, ‘Born to Live,’ captures my drive to succeed. The uplifting album starts with title track ‘Born to Live’, an empowering song about living my dreams. The album is filled with genuine love songs and stories of staying strong despite adversity. I live by the words I sing. Whether it’s being brave, laid back, or loving someone completely, the album shows the many sides of my outgoing personality. For myself being an honest and positive role model is important.

For more information on Dani and to follow her career, she can be liked on Facebook by searching Dani Dease, or followed on Twitter @danidease and on Instagram at danidease. Her music can also be found on iHeartDani.com as well as on YouTube, iTunes and Amazon Music.