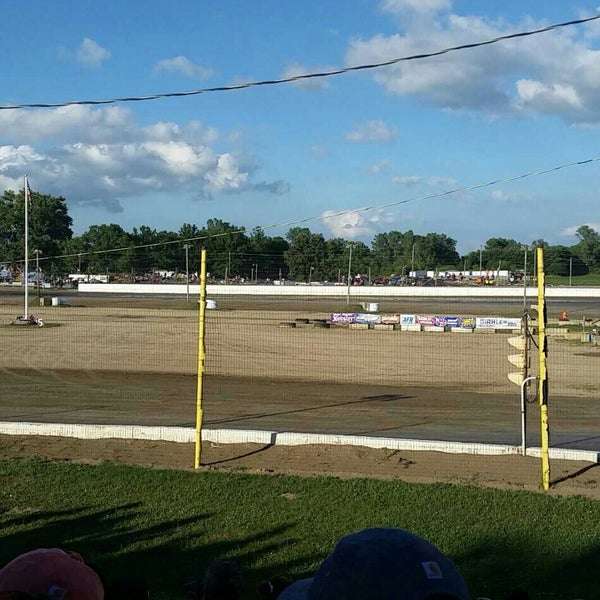 WAUSEON, OH – Casey Noonan and Rusty Schlenk put on one heck of a show in the DIRTcar UMP Late Model feature event Saturday night at Oakshade Raceway with Schlenk coming out on top and making a clean sweep of the weekend after winning at Attica on Friday night.

Noonan started on the pole of the 25-lap feature event and jumped out to the early lead. Multiple caution periods kept the field tight behind Noonan and by lap 12, Schlenk began to put the pressure on for the race lead after working up from his fifth starting position.

The two drivers raced door to door lap after lap with Schlenk, out of McClure, Ohio, finally gaining the advantage on lap 18 by a nose. Noonan fought back and reclaimed the top spot on lap 20.

Still racing side by side, Schlenk got the edge on lap 22 and finally completed the pass to take the checkered flag.

Noonan’s second-place finish moved him ahead of last week’s feature winner, Devin Shiels, into the lead of the track point standings. Hillard Miller finished third in the feature followed by Dusty Moore and Steve Kester.

Carter Murday found his way back to the Oakshade Raceway Winner’s Circle in the Sportsman feature race. The Adrian, Michigan, driver started inside the second row and took the early lead.

Last week’s feature winner, Jesse Jones, spun on lap six, forcing him to restart at the rear and taking him out of contention.

Murday went on to lead all the way to the checkered flag with Josh Robertson finishing close behind in second. Joe Smith finished third with Jeff Robertson and Chris Williams the rest of the top five finishers.

The Dominator Super Stock A Main was slowed multiple times with caution periods and even a red flag for an Adam Noonan fire. Scott Hammer would lead the first part of the race after starting on the pole.

Last week’s feature winner, Kolin Schilt out of Stryker, Ohio, worked the top side to challenge for the lead about halfway through the race and went on to pick up his second straight feature win.

Hammer settled for second just ahead of Dylan Burt. William “Bubba” Cundick and Donnie Ringman rounded out the top five.

The Dirt Track Truck Series (DTTS) made their second annual visit to Oakshade Raceway and had a three-wide battle for the early lead in their feature event between Vincent Wagoner, Jamie Heiser and Dan Ramey with Ramey eventually winning that battle.

His lead would be short-lived. Ramey spun on lap four and last year’s DTTS winner and 2015 Bomber/Dominator Super Stocks champion, Gregg DeTray, inherited the lead after starting shotgun on the field.

Josh Overmeir out of Morenci, Michigan, led from flag to flag in the Dominator Super Stock B Main. This race would also feature multiple caution periods including one that would set up a one-lap shootout at the finish in which Overmeir had to fend off a hard charging Justin Gamber.