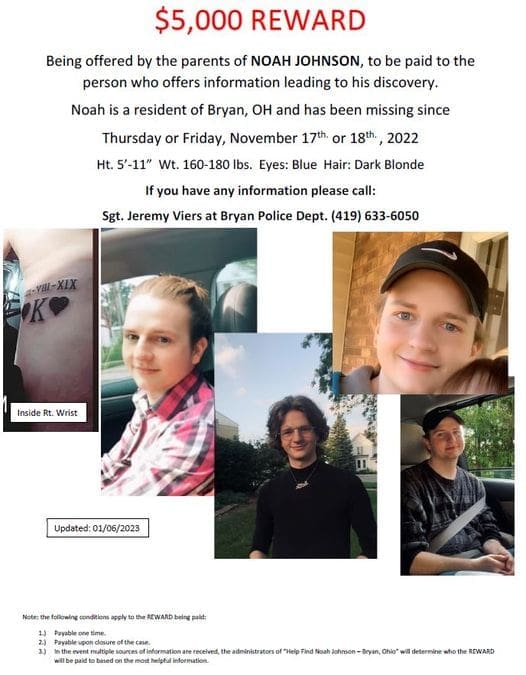 The search for Noah E. Johnson of Bryan is still ongoing after being reported missing on November 19th.

According to Kaitlynn Johnson, Noah’s sister, on the night of November 17th Noah was seen at home.

The next morning when his wife returned home around 10:00 a.m. there was a note on the table, and he was gone.

The note mentioned Harrison Lake and later that afternoon Noah’s wife went out to look for him.

At Harrison Lake, his car was found in a parking lot. The car was moved in hopes that Noah might see his car gone and come back.

It was the next day, Saturday November 19th, that the police were called and notified regarding Noah’s disappearance.

Since then, numerous attempts have been made to find Noah. Numerous agencies have been looking into his disappearance including the Bryan Police Department, the Ohio Department of Natural Resources, Fulton County Sheriff’s Office, Toledo Fire and Rescue Dive Team, Michigan State Police Dive Team, State and County K-9 teams, volunteers, family members and non-profit search organizations.

The only sign of Noah possibly being at Harrison Lake, other than his car, was a jacket and wallet as well as a second note found at the shoreline.

A witness also came forward stating that they had seen a person walking on County Road M at the park that could have matched Noah’s description.

The witness had stopped and asked if he needed a ride. The response received by the individual, according to Kaitlynn was that he was just out walking and thinking about things.

He was seen wearing a dark colored jacket and was carrying a water bottle.

Numerous attempts have been made by divers to search the lake along with sonar but nothing as of yet has been found.

Family members and volunteers, along with ODNR and Fulton County Sheriff personnel, have searched the entirety of Harrison Lake.

Many areas outside of the lake have also been searched including fields and properties near the lake, with no signs of Noah.

According to a press release put out by the Bryan Police Department, the investigation is still underway and is classified as a missing person.

“There is no probable cause indicating that a crime has occurred in Noah’s disappearance. Noah’s wife has continued to cooperate fully with investigators providing consent to search the vehicle, their residence on 12-06-22, phone and social media accounts, additional electronic devices, and by providing fingerprint, DNA, handwriting samples etc.”

The Bryan Police Department has also been offered help from the FBI and discussions with the Bureau will be taking place.

With all of this taking place, and there still being no signs of Noah, the family has decided to hire a private investigating firm.

According to Kaitlynn Johnson, the firm was hired on January 2nd, and employs former FBI investigators who are specialized in their abilities.

“There is technically a right people have to disappear if they want to. If that is the case, we just want to know and know that he is still breathing,” said Kaitlynn Johnson.

Kaitlynn described the two of them when they were growing up and how they always loved going to Harrison Lake.

“He liked to walk there anytime he was frustrated about something. Ever since we were kids, we jokingly called it our happy place.”

“It didn’t matter how far away he lived; he would make the drive there. It doesn’t surprise me that he went there for a walk,” continued Kaitlynn Johnson.

The police are still looking for Noah and are wanting anyone that may have information regarding his disappearance to come forward.

If anyone has information you are urged to call Sgt. Jeremy Viers with the Bryan Police Department at 419-633-6050.

A reward of $5,000 is available to anyone who offers information leading to his discovery.