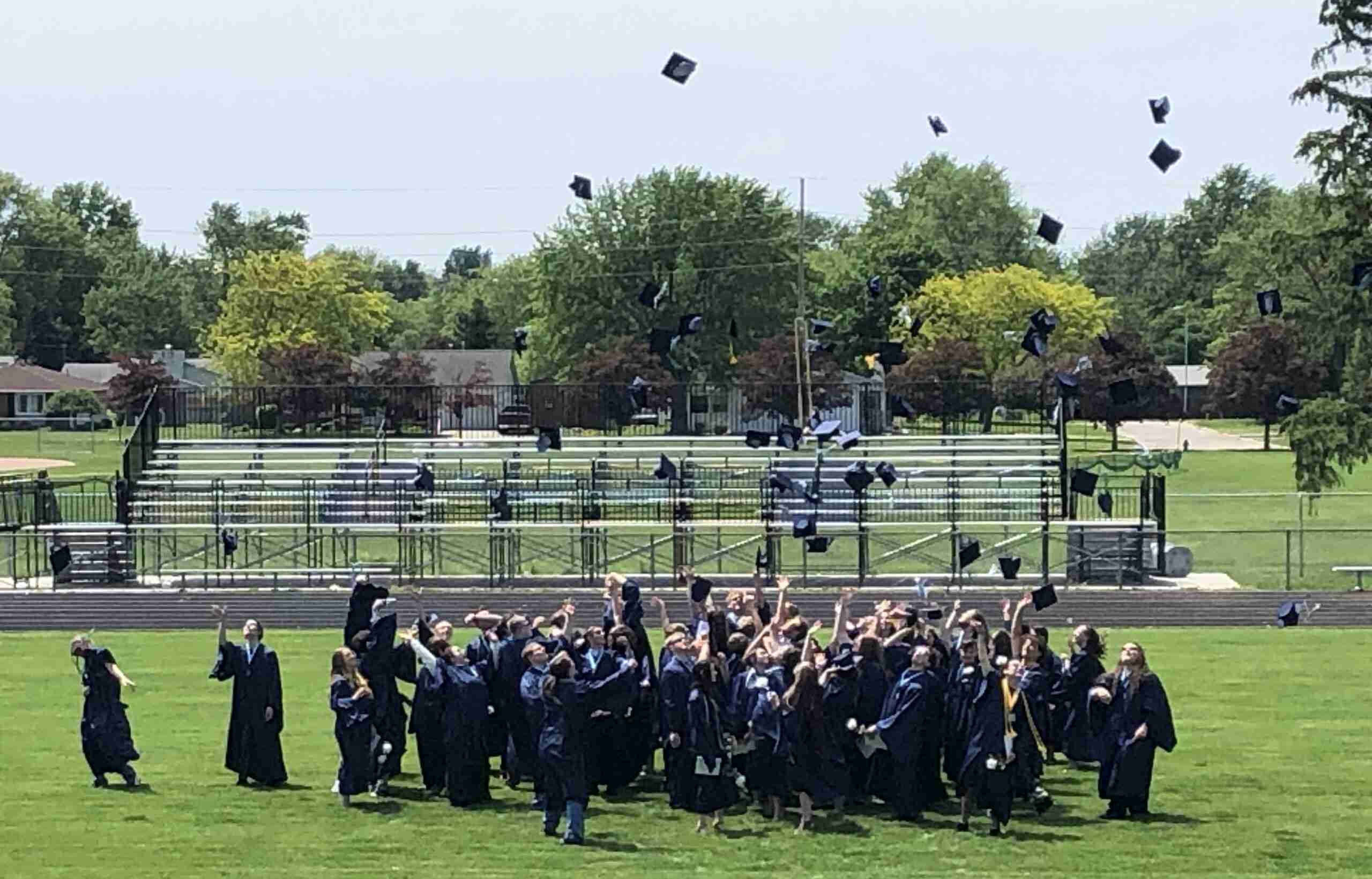 Montpelier Class of 2022 held their graduation ceremony on their football field, on the hot sunny afternoon of May 29th, with a lovely cool breeze keeping all from melting in the heat.

Sometimes the breeze was strong enough to blow the words away and allow the listeners to just hear it’s swooshing across the microphone, but the moments were special anyway.

Memorable funny moments, that might be remembered years from now by the graduates, occurred when the mic completely stopped working for a few minutes and Salutatorian Kaden Cummins just raised his voice so all could hear his humorous speech, or when Jake Clinger proceeded to walk across the stage with no diploma as his dad, Board Member Jeremy Clinger didn’t get up on the stage fast enough to give it to him. They backed up and enjoyed a hug as his dad presented him with a diploma.

The ceremony lasted less than an hour, but held many special moments for the graduates, their families and friends.

To the tune of the traditional processional grad music, played by the Montpelier HS Band, the graduates processed from the south gate, up the track and into their seats on the field facing the bleachers.

These included the Top 10%, those going into the Military, one member of 4-H, the winner of Blood Drive, Ohio Honors Diplomas, Readiness Seals, National Honor Society, National Technical Honor Society and Academic Achievement for 4 years.

Guest speaker for this year’s graduation was House of Prayer Pastor Ben Harris, who was recognized for the many accomplishments in Williams County and in Montpelier since he graduated from Montpelier High School in 1999.

Harris is well known, well-loved and respected by the students of Montpelier High School. He kept his speech short and to the point, sharing four words of wisdom to help the students succeed in the years following this big day.

1. Unlock the Potential of 24 Hours, 2. Flip the Script, 3. Eat the Frog, and 4 Seed the Clouds.  In other words, take one day at a time, fight the labels and write your own story, do the hardest thing first, and walk with humility, generosity and a strong work ethic.

Due to the wind, the Valedictorian, Parker Kreischer’s speech could not be heard, but as the mic stopped working for Salutatorian Kaden Cummins and he chose to project loudly, everyone enjoyed some good laughs with him.

Despite the heat, wiggly little children and even some crying babies, the crowd seemed to enjoy every moment of the ceremony.

Following the performance of “Adrenaline Engines” composed by Randall D. Standridge, by the HS band with participating seniors, the 59 members of the class of 2022 were announced as by Principal Su Thorp.

Mr. Rose presented the diplomas as they crossed the stage, with Jake Clinger accepting his from his dad and Riley Rockey accepting hers from her mom, Patti Rockey who is also a Board member.

Phongphiou remained on stage and led her class in the Moving of Tassels from right to left and a big cheer. The whole class then stood, joined by the crowd there to witness their big moment, and sang the Alma Mater of their school.

Before the recessional, the seniors went to center field and on the count of three from Mrs. Thorp, they threw their caps high in the air.

Everyone present was invited to be a part of a parade through town, led by the police and a fire truck, which would end at the fairgrounds.