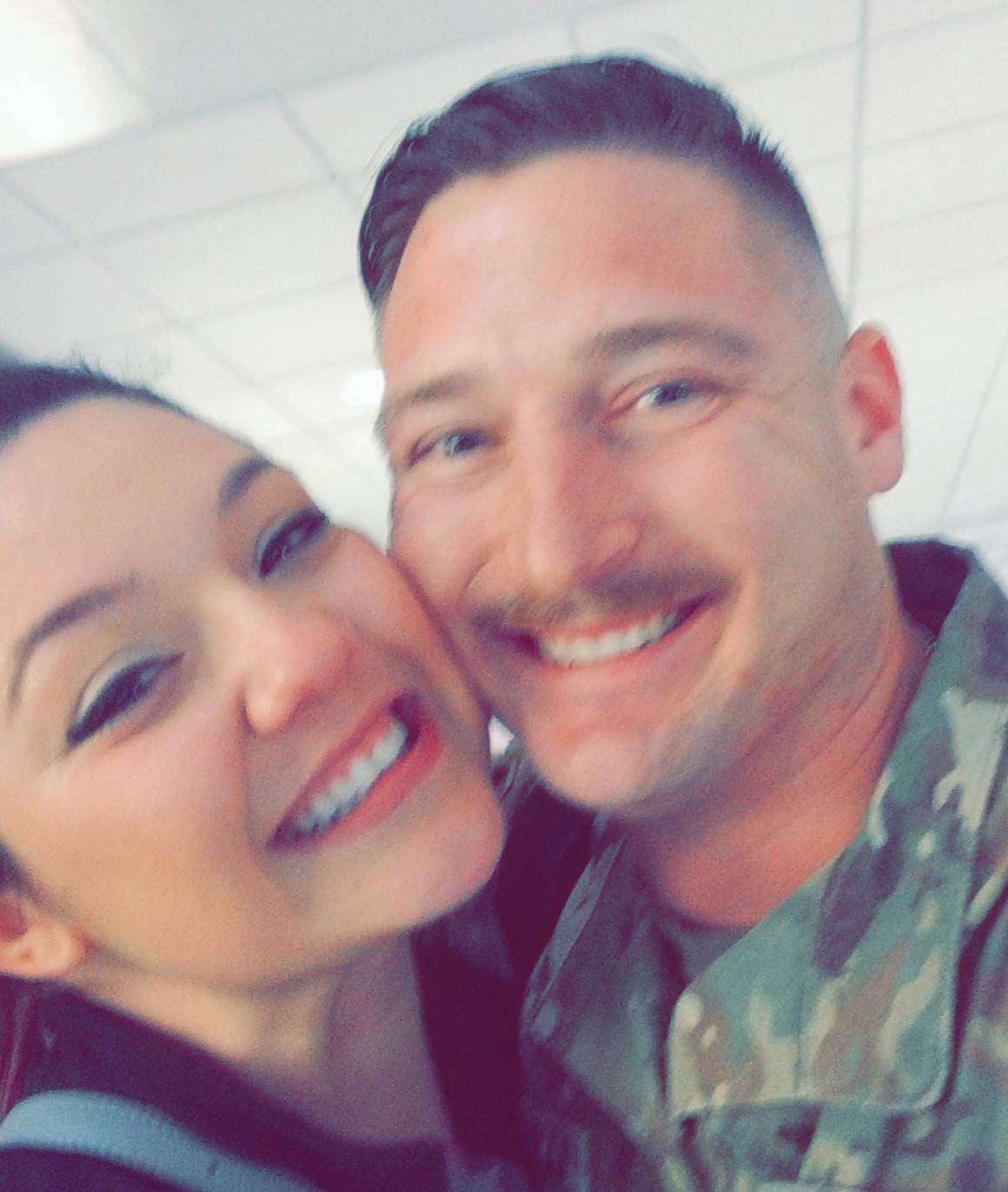 On February 7, 2019, Ben Saddoris deployed with his Army National Guard unit and headed to Iraq around May 19, where he spent roughly four months and then five in Kuwait as a CH47 Chinook maintainer. Just a few weeks ago, on January 11, 2020, he returned home to his wife Kelsey, who had spent this past year apart, being independent but speaking with Ben almost every day that he was gone.

“We celebrated our first anniversary with him gone,” Kelsey said in an interview held with the two of them. “My family took me out to dinner so I wouldn’t be alone. We talked on the phone as we did almost every day that he was gone.” Ben added that it was a “passive anniversary”, a big deal but with nothing they could do about it.

He plans to make their second anniversary a really big deal to make up for it, he said with a smile. They were married in September 2018, so had only had a few months together before he was called for duty. “People ask me how I like married life,” Kelsey said, “and I say I don’t know as we have been apart more than we have been together.”

The way Ben and Kelsey ended up together could come from a story book. Ben was born in September 1991 to John and Cindy McDonald and raised in Montpelier. He graduated from Montpelier High School in 2010, worked at Millers Grocery Store for a while and then Pioneer Village Market before enlisting on May 23, 2012.

Kelsey was born in Toledo to Amy and Ray Caywood, but raised in Houston, Texas, where her parents still live. Many of her family members live in Northwest Ohio and over the years she would visit them.

Ben and Kelsey met when they were around seven years old because he was best friends with her cousin. Her aunt would have Ben come and play with her son, while Kelsey was visiting and playing with her daughter. “We didn’t really acknowledge each other until we were thirteen or fourteen,” Ben shared.

“From then on though,” Kelsey added, “we kept in touch and considered each other best friends through our teenage years. We dated off and on and I flew up from Texas for his Prom.” Through the High school and college years they dated off and on and while he was at Bowling Green State University and she was at a college in Texas, they reconnected.

She moved back to be near family in Pioneer, getting a place to live in Toledo. In August of 2016 Ben graduated from Owens Police Academy and went straight to the Stryker Police Department. (Now Kelsey is attending Owens for her Associates in Science degree.)

This deployment was his first, so everything was new. They got to see each other one time while he was in Texas for a few months, but once he let for overseas, they didn’t see each other at all in person. They shared that it was hard for both of them because they were used to be together all the time.

She had to revert to being independent. It was frustrating but she kept herself very busy. She works at Walker Funeral Home in Toledo and is going to school. “Staying busy was a big help,” Kelsey said.

She recommends to wives of deployed military personell, “Surround yourself with people. A lot of my family are ex military as well… grandparents, uncles, parents, so I had a lot of support. With his base being in Akron I don’t really know any of the other military families, so I had my own support group.”

Ben and Kelsey both said that they can’t imagine how hard it was for military families before cell phones and other technology. “With technology we had access almost all the time and got to talk almost every day,” Ben shared.

“I had great service in Kuwait but in Iraq it was awful. I especially loved the care packages!” Kelsey added, “Especially his mom’s cookies. He loved the water flavor packets, too, because they have to drink so much water.”

Concerning his overseas stint, Ben said that the temperature was crazy. He got so used to it being hot that anything below 90 degrees felt cold. Coming home to cold Ohio wasn’t as hard as one would expect because he got to do it gradually. “We went from the 80’s in Kuwait, to Texas where it was like in the 60’s, and then to Ohio for the 30’s. I do feel cold a lot, but am pretty much used to it.”
While he was gone, Kelsey couldn’t watch the news because it would worry her. She had told him that she “would worry when he worried.” Kelsey’s words of advice to others in this situation are, “Stay patient. Understand what each other is going through. He felt bad because he couldn’t be there to help me with something at the house, but that was just the way it was.”

Ben shared that he is “super proud of how well she handled it.” When asked if there was a specific thing he took away from his time overseas, he couldn’t think of anything, but Kelsey said she feels he learned how to react to high intensity situations in a new way as it was crazier over there. They related a story of him being on the phone when a rocket exploded nearby and he just said, “Hey, I think there was a wreck or something. Gotta go! Bye.”

And hung up, as he didn’t want them to be scared for him. Ben said he feels he was already used to it because of being on the police force. He wasn’t “freaking out like some of the others were.” He felt like some of the other soldiers weren’t really aware of how it was going to be. He felt like they were in a relatively safe area and was very fortunate to leave before Iran started sending rockets at Kuwait.

About coming home, Ben shared, “the flight from Texas to Detroit, to see my wife after such a long time, and the flight was only two hours. It felt like a lifetime compared to the flight across the Atlantic. All i could think was how excited I was to get to see her. I kept opening the little shade and looking out the window!”

“When we landed I felt like I needed to be careful to not run over people!” No one was with Kelsey to meet him and they were glad that it was just them. Kelsey said, “We bowled each other over and cried. It was wonderful.” Kelsey agreed that the day he came home “was like the longest day!”

Ben said, “The last month of deployment was the longest ever! The new unit had shown up so we were basically sitting around waiting for time to pass.” And at home, Kelsey was feeling the same way.

Ben’s advice for new recruits who are heading out on their first deployment is, “take a lot of pictures there for the memories. I don’t feel like I took enough pictures. And if you have a unique opportunity to do something, do it! I got to take part in the Norwegian Foot March – an 18.6 mile ruck march, in full uniform, with a backpack of 25 pounds and we had to do it in 4hrs. 30 minutes! It was brutal but I am so glad I did it. I made it in 4 hours, 28 minutes and 30 seconds. It was my proudest moment of the whole deployment.” Kelsey shared that the blisters on his feet were huge and he has a scar on his back from it.

Stryker Police Chief Steve Schlosser and his department are all glad to be welcoming Ben back to work. At the February Village Council meeting, Lt. J.R. Trease informed council of Saddoris’ return saying, “In Great News, Ben Saddoris is back from overseas, all in one piece, and will be back on the schedule. We are happy to have him back.”

Welcome back and thank you for your service!