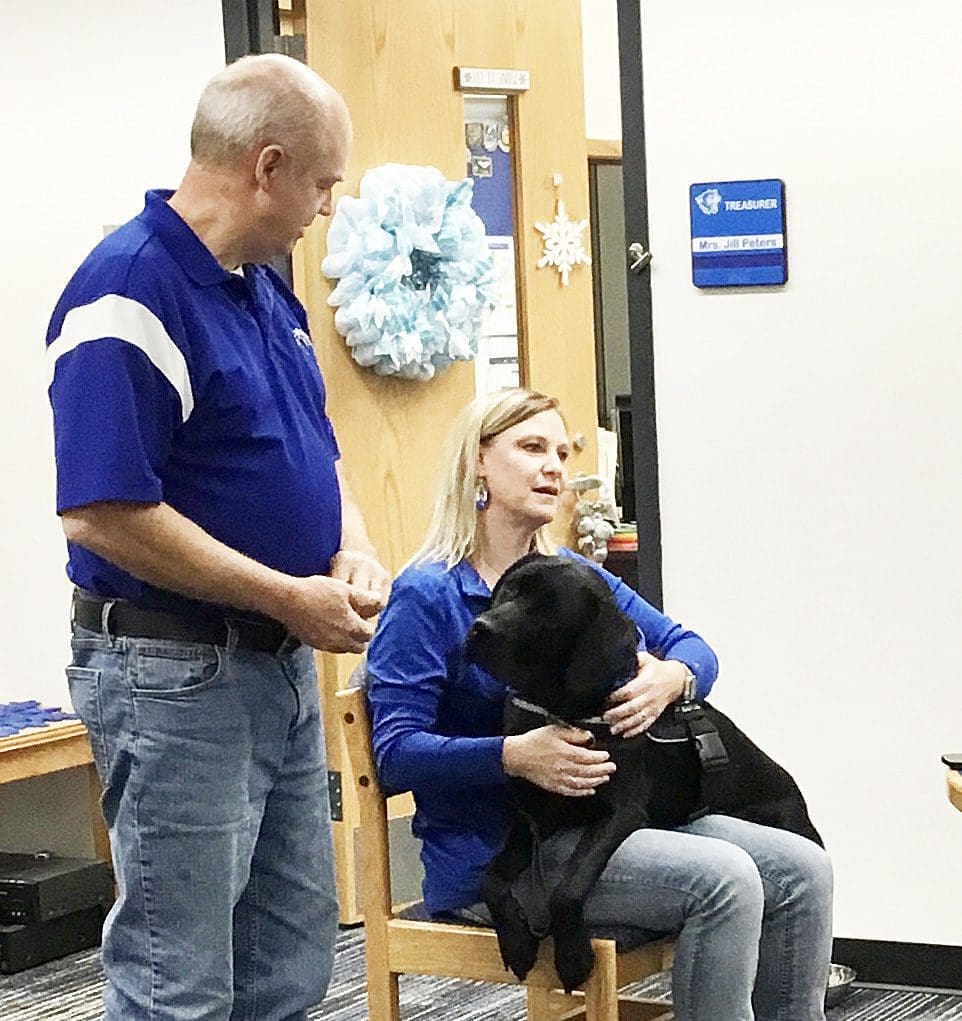 Stryker Schools Dean of Students Beth Morr arrived at the December 12, 2022 accompanied by Jet, the beautiful black Labrador who has joined the school staff.

Jet was on his leash and seemed happy to be with two of his handlers at the meeting, Morr and Principal Dave Schultz.

The three of them gave a demonstration to the board of a few of the commands that Jet responds to immediately, with Morr seated and Schultz giving the commands.

He got a treat each time he did what was asked. Morr said with a smile, “We know that Jet knows more than we do, but we are getting there.”

She shared how sometimes she has done something incorrectly and Jet just looks at her and then does it the way it should be done.

They have two and half pages full of commands that they are learning. It is all a positive reward training system and the word “no” is never used with him.

Morr said that Jet has already visited a few classes. “He is a $70,000 dog, from all the training he has had, and he can’t gain more than five pounds,” she shared.

“Only the handlers can feed him. He is also on an 18-month probation, so they could take him back if they felt like he wasn’t doing the right things, or the trainers aren’t doing the right things…or if we fed him too much, which is really hard not to do when he turns those big eyes at you that look like he is saying he is hungry!” That brought a laugh.

Board member Jason Leupp asked if he will be allowed to roam at games like the Bryan dog does, and Morr said at this time he needs to be on a leash and always be around one of his handlers.

She said that the providers will come in about three months to check on them. He is doing well with her two labs at her home, and as soon as she takes his work collar off, he is just as happy and free as any dog.

She said he loves to play with her younger dog and is very happy here. “We are excited,” was her end of report.

In the rest of her report, Morr informed the board that on December 5th they had PBIS (Positive Behavior Intervention) Awards for October and November, and will do so again on January 20, 2023 for December and January.

The Christmas program was held on December 9th and the auditorium was filled to overflowing with around 50 people standing.

She said that as crowds continue to grow, they will need to work on how to handle that next year.

All agreed that it was a great program, especially the drummers. Board member Sharon Von Seggern said that she has heard many positive comments from parents and grandparents.

On January 23, Stryker will host the County Spelling Bee at 7 p.m.

In regular business, the Board approved:

Mr. Schultz reported on the following:

The January 2023 Board of Education Organizational meeting was scheduled for Wednesday, January 11, 2023 at 5:30 in the high school meeting room, with Brent Froelich as President Pro-Tem.

Mr. Johnson invited all board members to join the staff at their staff meal on Friday, the last day before Christmas break, December 16 at 11:30.

He said that at noon they would be handing out Stryker Panther jackets to all the staff.

With no further business, the meeting adjourned at 4:21.