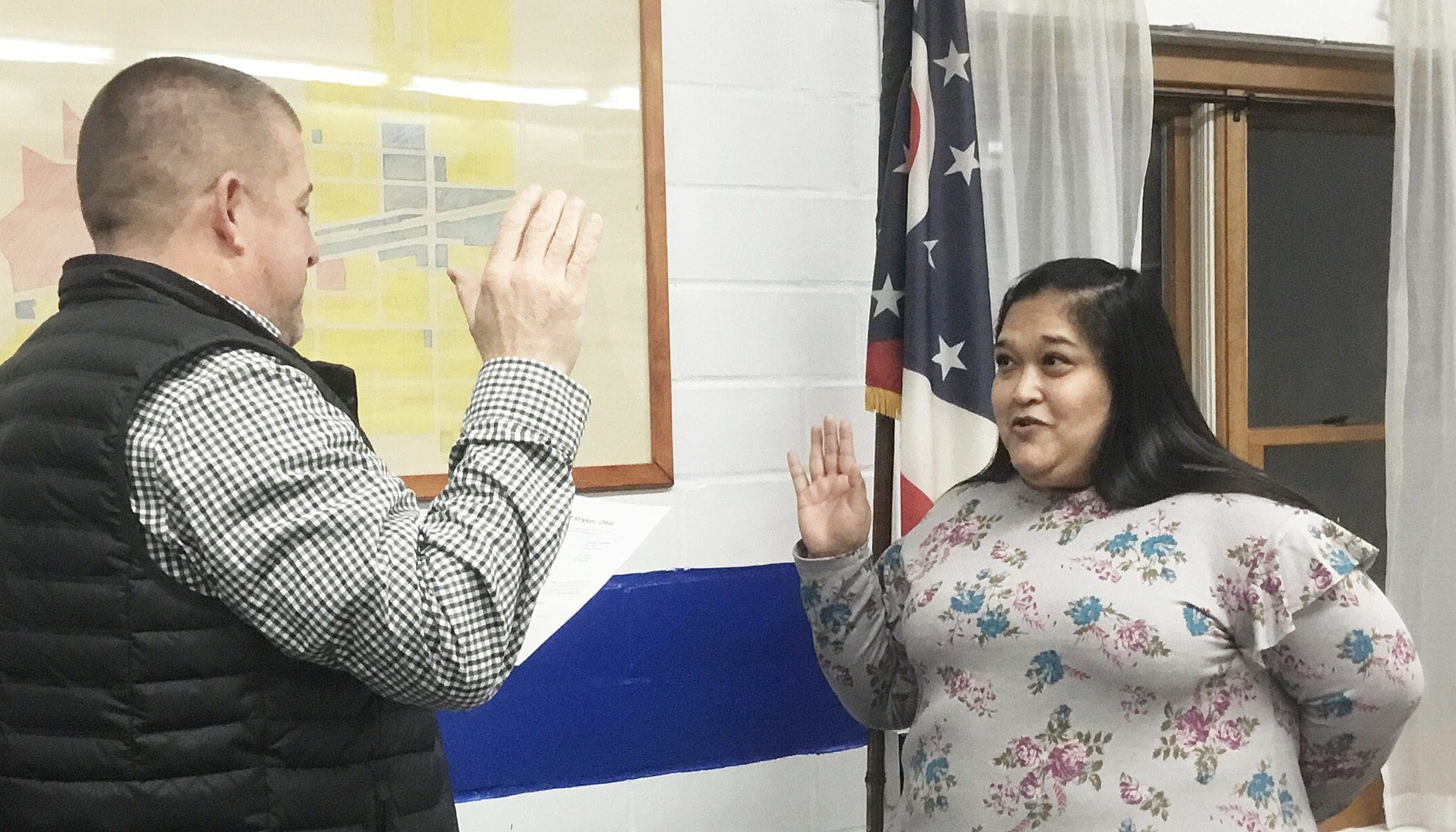 OATH OF OFFICE … Rachel Garcia was sworn in at the January 16, 2023 Stryker Village Council meeting to fill the vacant seat made open by the resignation of Kim Feehan. Garcia said she “wants to see Stryker grow, especially with more events that are family oriented.” (PHOTOS BY REBECCA MILLER, STAFF)

Two Stryker residents, Stan Whitlock and Rachel Garcia, sent letters of interest to the council and were present at the January 16, 2023 council meeting.

Council took some time to ask the two a few questions about their desire to be on council, before going into an executive session to discuss which one to nominate for the appointment.

Mayor Joe Beck informed the public about the process of appointment and encouraged whoever did not get the appointment to consider running in the fall election when two council seats and the mayors’ position will all be up for re-election.

A silent paper vote was taken with Beck and President Vicki Cameron counting them separately.

At that point in time, Cameron made a motion to appoint Rachel Garcia as the newest council member.

Mr. Whitlock congratulated her and thanked council for the consideration.

Another Oath of Office was given during the meeting when Police Chief Steve Schlosser introduced the newest part-time member of the Stryker PD, Robert Smith.

Smith has full-time experience with the West Unity Police Department but has recently moved into civilian work and wants to be part-time with Stryker.

Chief Schlosser also reported that K-9 Titan and Sergeant Steve Mendez are hard at work with training in Allen County, Indiana and it has been decided that Titan will be trained in all aspects, so he will also be certified for handler protection.

Schlosser announced the resignation of Daniel Bentancur from the force, stating that he and his family are moving near Cleveland.

The chief’s last day with the department will be March 31, 2023 and he is “excited about retirement.”

Other portions of the meeting included:

-Approval of the prior meeting minutes.

-Approval of the finance report.

-Council voted for President Vicki Cameron to continue as the president of council for 2023.

Mayor Beck said he will get committee assignments done for the next meeting as he wanted to wait till the new council member was appointed.

He also informed council that he and Fiscal Officer Beth Rediger are working on an ad to put in the papers, announcing the open position for Police Chief, with a specific date for when applications will need to be received.

Rediger let council know the good news that the bill for the big water tower by the school that was remodeled is completely paid.

She also informed them that on Thursday, January 19, 2023 she would be meeting with the County Commissioners for a first hearing, to get Community Block Grant information.

Councilor Sean Ingram asked what needs to be done about a letter from Dee Custar concerning the appointment of someone for the Health Department.

Mayor Beck said that he will check into that and get back to them at the next meeting.

Village Administrator Al Riegsecker reported that except for the sidewalk which will be completed in the summer, the school water tower is completed.

The “Ferro Water Tower” was inspected and is in “good condition” he said. EPA and the engineer will both do inspections as well.

He announced that they are working with WEDCO concerning a possible land acquisition for a business.

Solicitor Kevin Whitlock let council know that he is still waiting on a lot split approval and then they can move forward with the other tower project.

Cameron asked if they had heard anything from the people who already are working on lot improvement in the village and Rediger said that one of them had stopped in with questions last week.

She said they talked about building permits, requirements, lot rules, possibility of duplex, his plan for a three-bedroom house and she directed him to speak with other local landlords for rental questions.

Cameron also spoke about the need for those whose seats are coming up for election to get their paperwork done this time, as that caused some problems last time when they all forgot.

Her last comment was that she is “still working on a dog park” saying they are researching where to put it, how much fencing would cost, trying to get funding to pay for it, and other possible issues. “It is still a work in progress,” she said.

With no further business, the meeting adjourned. All Stryker Council meetings are held on the third Monday night of the month at 6 p.m., unless determined otherwise during the meeting a month before, making the next meeting to be held on February 20, 2023.