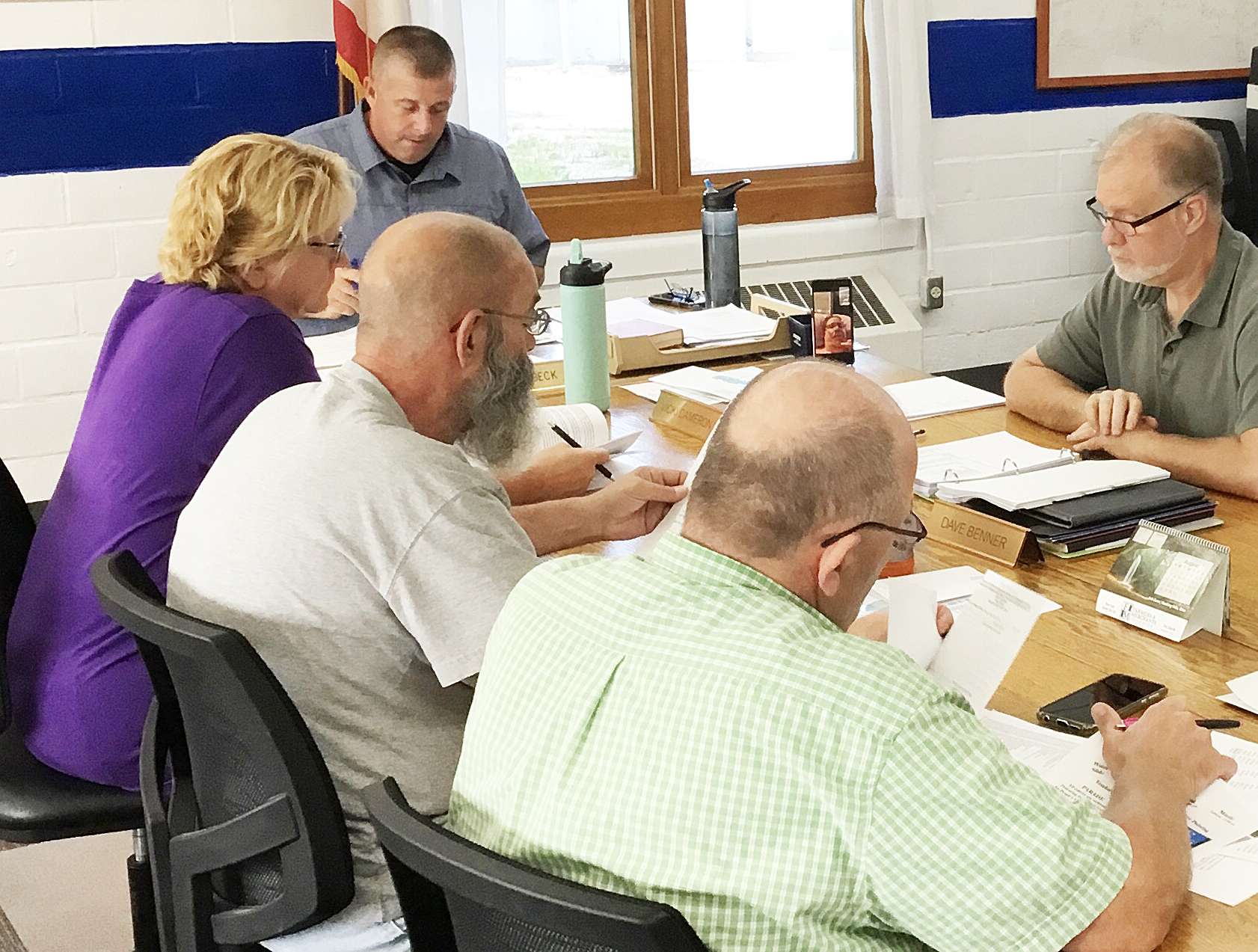 INCLUSIVE COUNCIL … Stryker Village Council and Mayor Joe Beck are including council member Kim Feehan via phone as she is dealing with some medical issues. It worked well as she was able to participate in the votes during the August 15th, 2022 meeting. Going around the table from front to back are council members Nick Wlasiuk, Dave Benner, Vicki Cameron, Mayor Joe Beck and council member Sean Ingram. (PHOTO BT REBECCA MILLER, STAFF)

Stryker Area Heritage Council is hosting the Stryker 2022 Homecoming/A Day at the Depot on Saturday August 27th.  Village council members all received a flyer in their packet for the August 15th, 2022 council meeting.

The day will be filled with activities on North Depot Street and West Street, starting after the parade until 4 p.m., including a History of Main Street Presentation at 2 p.m., 50/50 drawing from 2-4pm, music from 1-4 p.m., car wash starting at 2 p.m. at the school, a water slide, ice cream, depot tours, BBQ, vendors, face painting, dunk tank, FFA Farm Fun and 3 on 3 Basketball.

The parade will start at 11 a.m. (with line up at 10 a.m. on Ellis St.) and will be featuring Jeeps this year. At 3 p.m. there will be a trophy awarded for People’s Choice.

Councilor Vicki Cameron shared the Welfare Report, alerting the other council members that they discussed the events planned for October 29th, 2022.

She said she is not sure if it will be called fall fest or something else but they have plans for a Helicopter and a possible Monster Truck and are working out the details.

Police Chief Steve Schlosser reported that since the last meeting the department had 49 calls for service, 5 traffic warnings, 0 citations and 0 arrests.

The schedule has been adjusted and is working well in keeping the village covered.

Attorney Kevin Whitlock informed council that he has spoken with the attorney of the owners of the water tower that is not owned by the village.

Their attorney said he will get in touch with them and they will develop a plan to “see what they can do to make a transaction happen.” Mayor Joe Beck encouraged him to keep working on it.

Whitlock said that most likely the village will be bearing most of the costs as his office will need to get a survey and take care of the real estate legal items.

Stryker Village Administrator Al Riegsecker informed council that they had to bid twice for the water tower job as the first one came in over the estimate.

He explained that it will take care of the screen repair on top of the tower, the painting of the panther, and the village name. The screen would most likely need repair at a later date so they are going to get it taken care of while the project is in process.

The contractor will be able to start as soon as September 6th. Mayor Beck stated that the biggest change is going to be having the panther on it and the lettering of Stryker might be slightly different.

Riegsecker said they are hoping to have the same lettering. There will be a pre-construction meeting before they start. There will be no dust or danger for those who live nearby.

There will also be no water changes for residents while it is being done.