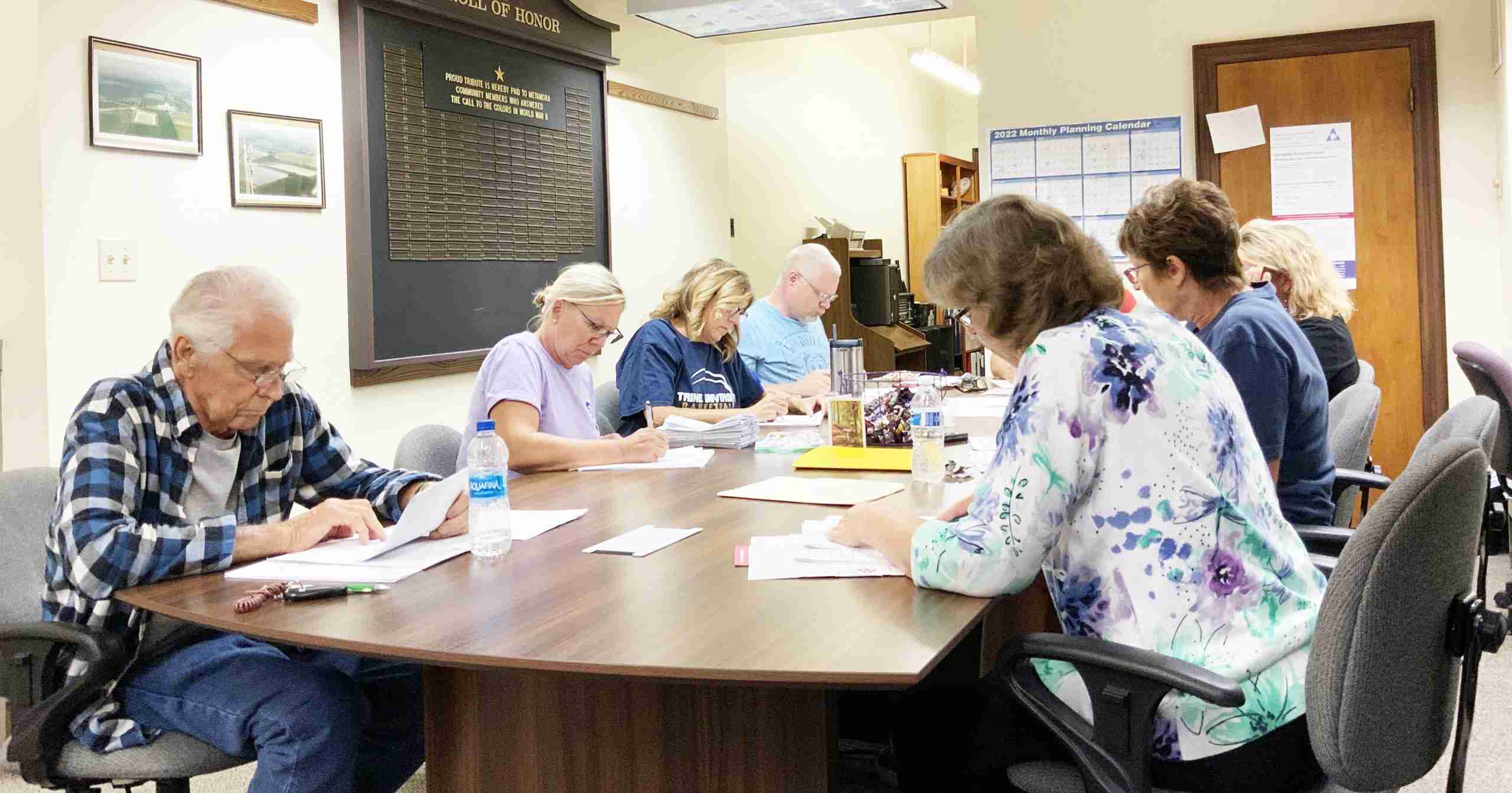 Metamora Village Council began their regular meeting on Monday, August 15th at 8:00 p.m. The meeting began with a roll call of members and the Pledge of Allegiance.

Minutes from the previous August 1st meeting were approved, as well as the finance report.

Council first moved to hear from two members of the public, Tom Sullivan and Jeff Truckor. Mr. Sullivan was the first to speak, and stated, “I have several issues, the first one is, last Tuesday I had a dumpster dropped off to recycle some concrete at 210 West Main Street.”

“From the time that was dropped off some individual was looking for an excuse to find something I was violating by having that dumpster there.”

“It’s in the curb lane, which is a parking lane, wasn’t blocking any driveways, and at that point wasn’t breaking any laws, yet somebody and I’m ninety-five percent sure they’re sitting at that table, was all over me that in that point and time.” So does anyone want to come forward and say that there that individual?”

Council President, Karon Lane, replied to Sullivan and explained, “I was concerned about the dumpster, that there was no reflective tape on it without knowing how long it was going to be there.”

Mayor Richard Sauerlender addressed Sullivan and stated, “The village policy has been for years that if a person complains, we take a look and see what that complaint is and if there is a violation of a code or concern about it.” “It ends up going to the zoning person which would be the village administrator.”

Sullivan continued to express concerns to the council regarding the dumpster. He shared, “The next day when I was in the middle of loading it, I get a call from the dumpster people that someone from the village had called them and scheduled a pickup on my dumpster.”

Sullivan pointed out that his twenty-four hours was not up and had the dumpster company not called him, he would have received a second expense.

Sauerlender added, “Upon hearing about this, I have advised our people in this office that if there are any complaints or concerns made to this office about a zoning issue or whatever that this office should not be the one to fix it.”

“They should inform people who are complaining that the person to be contacted would be the zoning officer and that that should be the only person they are talking to, not other people.”

Sullivan then asked, “Whose job is it to police violations in this town?” Sauerlender responded, “The way the town has operated since I’ve been on council, it’s basically on a complaint basis.”

“So, if someone complains or says something then we go to the zoning officer and say deal with it.”

Sullivan brought up his second concern with the council regarding four-wheelers. Sullivan asked, “Is it not unanimous at this table that there is a four-wheeler problem in town and that you’re all about trying to get them resolved?”

Council member John Pupos added, “I’ve called the sheriff’s department this weekend already.” Pupos went on to add, “Four wheelers are the bigger problem since golf carts can be made street legal according to Ohio Revised Code.”

“The sherriff’s deputy has stopped people and said you’re in violation and we are supposed to start ticketing.”

Sullivan brought up a picture on his phone of a four-wheeler at Karon Lane’s house and showed council and asked, “Does Karen recognize that?”

Sullivan stated, “But yet you didn’t do anything about it, and you just got done saying if there’s a four-wheeler in town, we are going to do our best to take care of it.”

Lane expressed she did not know about the four-wheeler until she heard the visitor start it up to leave.

The next guest was John Truckor. Truckor told council he received a letter regarding the weeds behind his home and that he took care of it. Truckor brought the reservoir and lagoon up and how the tall weeds are.

Truckor stated, “Wherever you dump your leaves and brush, weeds are six foot tall on top of the pile and all the seeds blow out in my fields. So how are we going to take care of that?” Sauerlender advised Truckor to talk to the village administrator.

Council had a discussion on mowing the lagoon and reservoir, what they had previously been mowed with, and how to take care of it.

Truckor added, “If you guys are worried about everyone else taking care of their properties, you guys need to take care of your properties.”

Pupos stated, “Our problem is our tractor bucket does not lift anything anymore, it needs to be completely rebuilt which is on our wish list for next year.”

Truckor stressed to the council that they needed to do preventative maintenance. Truckor advised council to use a recommended spray for the weeds, but the council is concerned on restrictions on what can be sprayed near a water source.

During Pupos’s land and buildings report, he shared the trucks are not in good shape. Although a new truck has been ordered, council is still unsure of its delivery date.

Pupos presented council with a list of things the village wants to send to the county auction, which pending a few items being sold separately, was approved.

Council voted to refurbish the fence around and near the dumpsters.

Pupos shared the villages sewer rate research regarding the revenue and expense totals, adding that this year they have spent more than they’ve brought in. Following discussion of potentially raising the sewer rates, council voted to table it.

The village will be using the CivicReady Alert Notifications from the county and village.

A fall newsletter will be going out soon to the village members who sign up for it. Metamora Village Fiscal Officer Heather Lumbrezer has created a rough draft of the newsletter that she presented council with and asked if anyone had anything to add to it.

An increased expense line for gas to mow at the park was approved, along with a transfer of money from the general fund to the street fund to pay Ward Construction for the tar and chipping.

The mayor will be gone for three weeks and assigned someone to sign the checks for him. Karon Lane called the meeting to executive session at 9:04 p.m.

Following directly after the executive session, the meeting was adjourned.