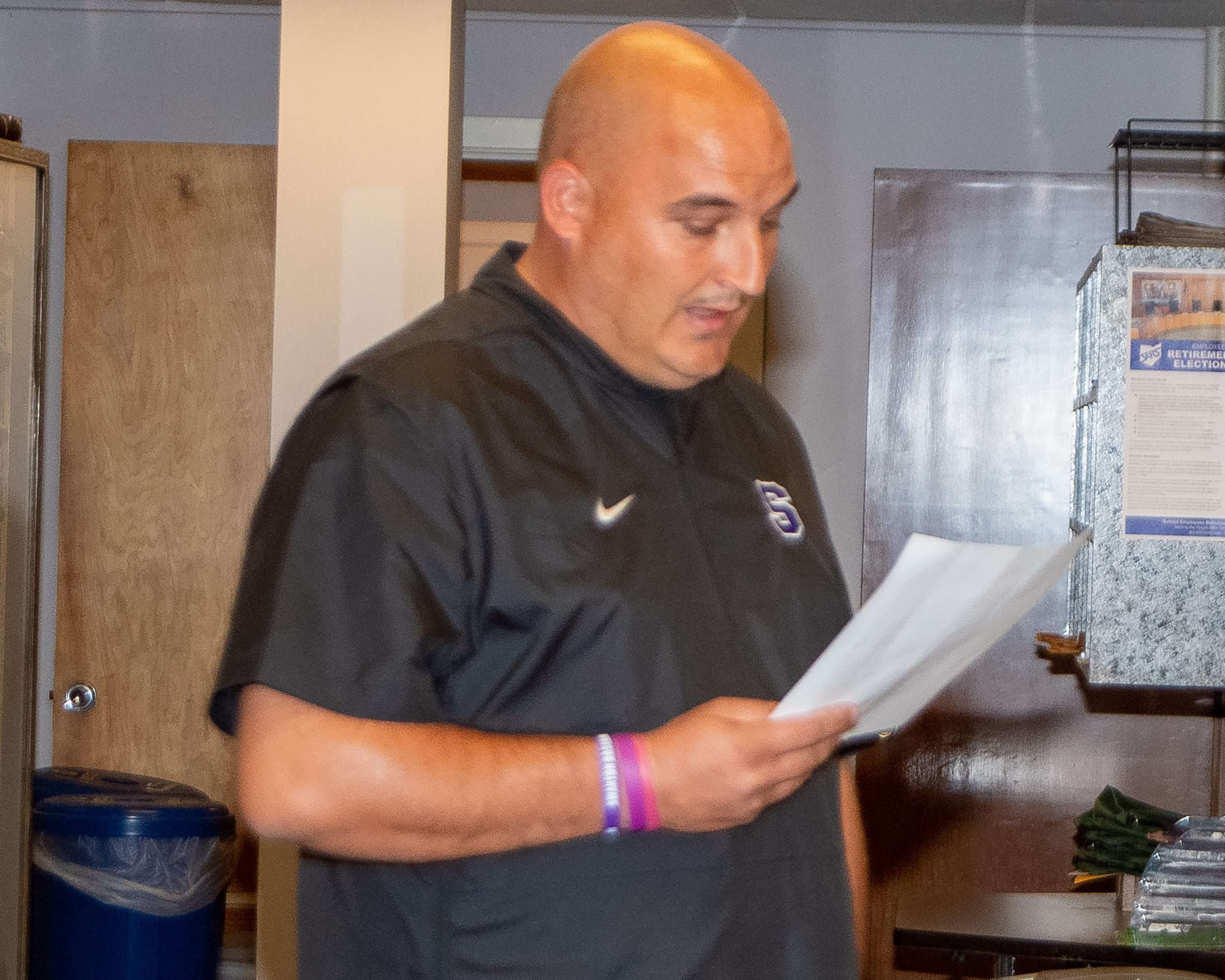 ATHLETIC BOOSTERS … Tim Nelson from the Swanton Athletic Boosters came before the Swanton Board of Education to make a donation on behalf of the boosters. The donation is for a maximum total of $100,000 for the school’s baseball and softball complex. (PHOTO BY JACOB KESSLER, STAFF)

The Swanton School Board held their meeting on Wednesday, October 20th. The meeting was called to order at 6:30 p.m. followed by the Pledge of Allegiance and roll call.

The board then moved to the hearing of public with Tim Nelson from the Swanton Athletic Boosters standing to speak.

The current fields require hundreds of thousands of dollars worth of upkeep to be at the league standards. Furthermore, the existing facilities lack ample parking and are not handicap accessible. To show our commitment to the project, the Swanton Athletic boosters are pledging up to $100,000 in donations to the complex.

The board then moved to approve the agenda. Following after, a commendation was presented to Andrew Emerine for the NWOAL Golf Coach of the Year. His wife was at the meeting to accept the award for him. The board next heard the reports of the treasurer.

The treasurer recommended the approval of the previous meetings minutes that took place on September 15th as well as the financial reports for September 2021.

A discussion then took place regarding the list of donations with $65,000 being donated from Northstar Bluescope Steel to the PI fund for the Baseball/Softball project.

The treasurer also recommended the approval of several appropriation modifications and estimated resource changes. The board then moved to approve all items that were discussed in the treasurer’s report.

The treasurer then spoke regarding the districts five-year forecast and explained that there will be a full presentation provided at the November 17th meeting.

The board then moved to hear reports and recommendations from the Superintendent who first spoke about the coming levy. The levy will be on the ballot on November 2nd and is a 5-year substitute levy replacing the emergency levy from 1996. It was stressed that tax amounts will not change for taxpayers with this levy.

Discussion then followed regarding the ARP IDEA Grant. It is a new federal grant, and the school will be receiving over $60,000 to be used for special education programming. The grant stipulates that the district seeks public comments on how this money could be used.

Moving on to building reports, a reminder was given that Homecoming takes place this week. Third grade testing has taken place this week with some kids still needing to test due to quarantine. On October 29th, the second annual pumpkin fun run will be taking place around noon.

The Amazing Shake took place and was a success. Applications are also being sent out for more grants. The board then moved to enter into executive session at 6:55 p.m. before later adjourning for the evening.