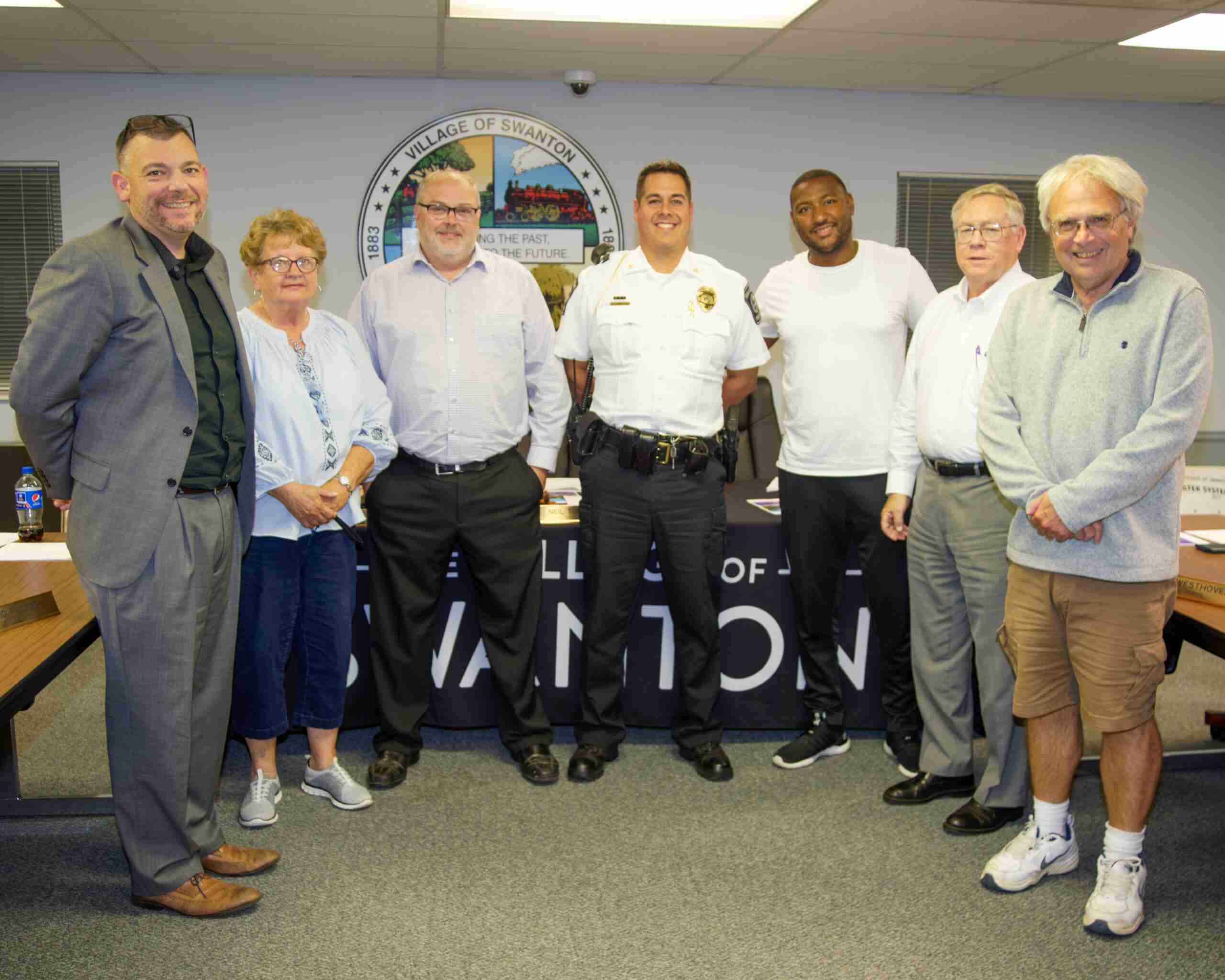 PAY INCREASE APPROVED … Members of the Swanton Village Council, Mayor and Police Chief Adam Berg stand together in the Village Chamber after passing a pay increase for police officers in the village. (PHOTO BY JACOB KESSLER, STAFF)

The Swanton Village Council held their meeting on Monday, September 27th. The meeting was called to order at 7:00 p.m. followed by a prayer and the Pledge of Allegiance.

Roll call then took place with council member Dianna Westhoven absent. Council then moved to approve the agenda as presented as well as the minutes for the previous meeting on September 13th.

Council then moved to hear committee reports with public service being heard first. The unimproved lot on Hickory Street is still being looked at. Right now, the thinking is to bring it into the Village as a road.

The Public service building issues were also discussed. The building has issues and needs updated. The work for the building will be moving forward.

A motion was then made and approved for a consultancy contract with OHM advisors to assess the needs for the public service facility. The Foertmeyer surcharge was discussed and left at $412.92.

Council then heard a report from the public safety committee. First on the agenda was a grant for police body armor. A grant is available, and an application will need to be submitted. This grant would give three officers new armor.

A liquor license renewal was also discussed for Speedway. A motion was made which passed to approve the renewal. Next, council approved a contract renewal for Yvonne Trevino. Yvonne will continue to represent the Village in legal matters.

Council then discussed compensation and retention of village employees. Discussions revolved around the increasing of pay for police officers in the Village.

Next, council discussed the EMS contract for the years of 2022-2026. Food truck safety was also discussed with council stating that they have been using county regulations but may look into getting their own.

Parking on Waterwood farms will not be changing. Parking is still not allowed on the east side of the road. Storage of vehicles for law enforcement use was also discussed and will be looked at further in the future.

Lastly, a discussion took place regarding the possibility of introducing a new levy specifically set aside for the police department. It was said that further discussions will take place during executive session.

Mayor Toeppe then introduced a new proclamation to council regarding fire safety. Mayor Toeppe stated that village residents should have smoke detectors and have a fire plan. October 3rd through the 9th of 2021 shall be known as fire prevention week.

In old business, council held the Second Reading for an Ordinance to amend Chapter 51 sewers of The Codified Ordinances of Swanton, Ohio. A motion was made to approve the ordinance which passed.

Council then held a Second Reading for an Ordinance to amend Chapter 54 Storm Water Utility of the Codified Ordinances of Swanton, Ohio. A motion was made to approve this ordinance which was also approved.

Moving on to new business, council moved to approve the June and July financial documents as well as the Fulton County Local Government Fund monies issue.

Council then heard an emergency Ordinance to approve the Fulton County EMS Contract for the years of 2022 to 2026. A motion to suspend the rules was made and approved followed by a motion to accept the ordinance which was also approved.

Council then moved to hear an Emergency Ordinance regarding the Swanton Village Employee compensation schedule for Swanton Police Division 2022-2025. The starting pay will increase from $16.00 an hour starting to $18.00 an hour which will take place in November.

Pay will also increase for each officer based on multiple circumstances. A motion was made suspend the rules which passed followed by a motion to approve the ordinance which also passed.

Next was an Emergency Resolution regarding the acceptance of amounts and rates as determined by the budget commission, authorizing the necessary tax levies and certifying them to the county auditor. A motion was made to suspend the rules which passed followed by a motion to approve the resolution which was also approved.

Next was an emergency resolution to authorize the submission and support of an application to the Ohio Attorney General’s Office, for Ohio Law Enforcement Body Armor Grant Program.

A motion was made to suspend the rules which was approved followed by a motion to approve the resolution which was also approved.

Council then held the first reading for an Ordinance to give authorization to the Village Administrator to enter into a fisheries agreement with The Ohio Department of Natural Resources. A motion to approve the ordinance was made and approved.

Lastly, council held the first reading for an Ordinance regarding Codified Ordinance updates. A motion was made to approve the ordinance which was approved.

Council then moved to hear a report from the Village Administrator. Administrator Hoelzle stated that the Bulk Pickup Day went well. She also went on to remind everyone that October 4th is a special finance committee meeting.

Hoelzle went on to give thanks to all Village divisions in regard to all the rain that was received. Everyone worked hard to make sure that everything worked the way it was supposed to.

The next meeting will be taking place on October 12th. The tree commission met and made the recommendation to change the meeting times from 5:30 p.m. to 6:00 p.m. A motion was made and approved to change the time.

Following discussions for other general updates, a discussion took place regarding a proclamation received regarding the previous census. The Village stands at 3,897 people. That number is an increase of 207 people from the census in 2010.

In Personnel, council was informed that an officer that had submitted their resignation has decided to stay. A motion was made to cancel the officer’s resignation which was approved.

Council then moved to enter into executive session at 7:39 p.m. Upon return council moved to adjourn for the evening.