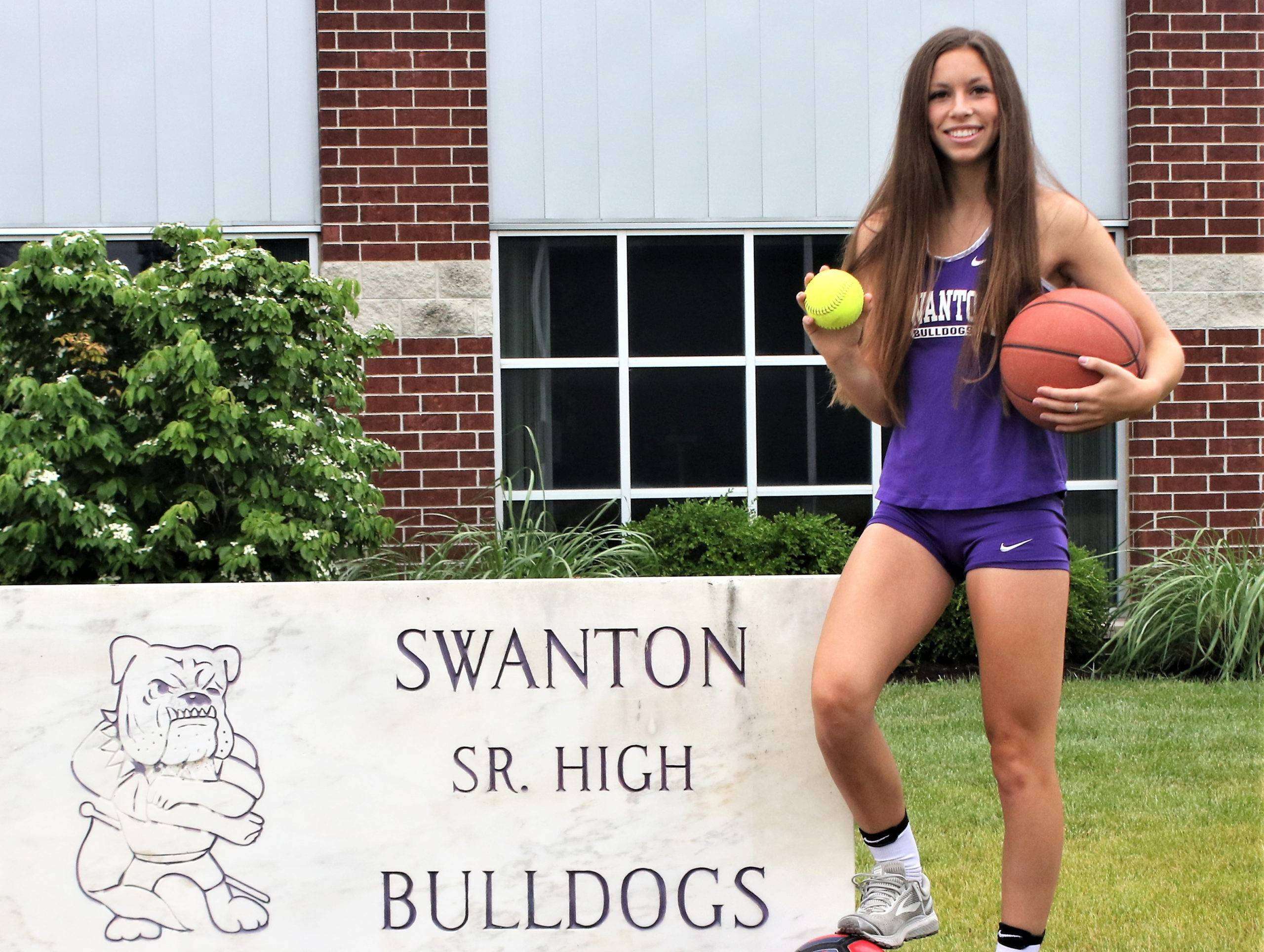 At school districts the size of Swanton, three-sport athletes are common, almost necessary in some cases to fill rosters and achieve competitiveness in a strong sports league such as the NWOAL. However, four-sport athletes are far less common and the athlete that can excel in all sports in all four years of high school is a rare commodity, no matter the size of the student body.

It takes hard work, dedication, perseverance, natural athleticism, a competitive spirit and excellent time management skills when factoring in the main reason you are in school to begin with, to receive an education. Haley Nelson is that rare commodity.

She is an Energizer Bunny that marches to the beat of her own drum. And she took full advantage of her assets and her opportunities to finish her high school athletic career with 16 varsity letters, four each in soccer, basketball, softball and track.

Along the way, Haley, or “Nelly”, as she is often called by her coaches and teammates, garnered first team, second team and honorable mention league honors among the various sports. During her time at Swanton, the Lady Bulldogs soccer teams won back-to-back NWOAL championships, two sectional and one district title.

The basketball team won their first sectional title in many years and the track team won a district title for the first time in school history.

Haley was also part of the 4×100 and 4×200 relay teams that qualified for the State Tournament in Columbus with the 4×200 team finishing fifth overall.  Besides her obvious athletic talents, her coaches will all tell you it is the intangibles that set her apart.

“Nelly is the rare player that is always on time or early for extra work and gives you everything she has every second,” said Head basketball coach Eric Oakes who began coaching Haley in the eighth grade. “She showed great leadership on and off the court and helped guide the younger players in the program.”

Haley’s all-out efforts were always impressively on display when playing defense in soccer and basketball. Her speed and aggressive play pestered and frustrated opponents, forcing numerous turnovers and leading to many Bulldog victories.

“She is a very gifted athlete and a fierce competitor,” remarked Joe Nye who coached her in soccer and softball. “She is one of those athletes that only comes along once in a while.”

What really accentuates Haley’s athletic abilities is her intelligence. She is not just an athlete; she is an NWOAL Scholar Athlete and a member of the National Honor Society (NHS). It is an asset that has served her well on the field of play and will serve her even better in college and the rest of her life.

In addition to excellent coaching across the board, Haley benefitted greatly from being in one of the most accomplished graduating classes, both athletically and academically, Swanton has ever seen.

“It helped a lot because you kind of fed off each other,” she said, talking about her highly capable classmates. “You knew you had to work just as hard as the person next to you. Our class was very competitive.”

This fall Haley will be attending Davenport University in Grand Rapids, Michigan where she will be a member of the Panthers’ indoor and outdoor track teams. Her track coach at Swanton, Ryan Borer, is confident she will do very well at the next level.

“Haley was able to achieve this because of her hard work, dedication and drive to be successful,” said Coach Borer. “She has been a joy to coach because she always wanted to get better and worked tirelessly to achieve her goals. She and her very talented teammates have helped put Swanton Track back on the map.”

Initially, Haley planned to major in accounting at Davenport but realized a job that required a lot of sitting would not be in her nature and has decided to enroll in the nursing program. While competing in a two-season sport, nursing will be a challenging major but she believes she is ready.

“Doing four sports in high school and having to juggle everything has helped me prepare for it (being a college student athlete),” said Haley. “But there were a lot of late nights,” she admitted. For Haley, there will be four more years of school with four more years of sports. And the beat goes on.