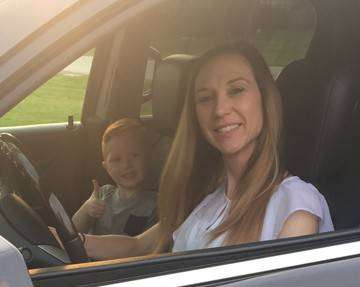 THAT’S MY MOM! … Jackson Potter gives the high sign of approval as he rides shotgun with his mother, Stryker’s own Jennifer Potter.

The story is viral. It is the story of how a woman, seeing a young child struggling in a swimming pool, not only saved him, but his pregnant mother as well. The mainstream media has picked up the Indianapolis, Indiana-based story, and has trumpeted it from coast-to-coast as a heartwarming story of heroism.

Of that woman, Jennifer Potter, there was one small omission in the reports, one for which the media would consider dross. Jennifer Potter is the former Jennifer Kurivial, the daughter of Stryker’s John and Sandra Kurivial, the sister of David and Stephanie Kurivial, and a member of the Stryker Class of 2001.

On October 3, 2009, Jennifer became the bride of Derrick ‘Dusty’ Potter, and together they have a son, Jackson. The native of Panther Country became the Assistant Property Manager at Brookwood Apartments on the south side of Indianapolis. It was there that the events that changed her life, and saved three others, took place. The morning of June 6 dawned like any other for Jennifer, but things changed quickly as the noon hour approached.

“It was right around 11:30,” Jennifer recounted. “My maintenance guy, Paul and I were coming back from walking units on our golf cart, because the one unit that we wanted to walk, our vendor key didn’t work, so we had to come back for the actual key to the apartment. So we came back, got the key, started driving back to the same apartment, but we went through the grass by the pool instead of going all the way around.

I happened to notice that there were some kids in the pool and I was like, ‘Whoa, hold on Paul; where’s the adult?’ I started looking around the pool, and I didn’t see any adults, but then I saw a small boy in the pool with the life saving ring in there with him.”

A mother herself, Jennifer’s instincts kicked in. “I instantly jumped off the cart, and started running the length of the fence because I’m on the opposite end of the pool to where the gate is…I have to run all the length of the fence. While I’m running, I’m taking off my coat because I had my coat on that morning (I’m always cold). I had my phone and keys in my hand, so I just dropped them, got over to the gate, ran in, flipped my shoes off real quick, dove into the pool and swam over to him.”

“Then I realized that his mother was underneath him, and she literally had him on top of her, holding him up. She was 100% submerged under the water, but his head was above the water because he’s basically sitting on top of her, and he’s got his arm around the life saving ring.”

“So I got there, and I started to panic a little because I wasn’t sure I was going to be able to do this, now that I have a small child and the mother in the pool,” Jennifer recalled. “But I literally grabbed onto both of them with my left arm and started swimming as fast as I could to the other side of the pool.”

“So we got the boy out of the way,” Jennifer continued. “Then my other maintenance guy had been darting across…he knew something was up. He came over, ran in and helped us pull her completely out of the pool. He ended up calling 911, and then the ambulance and everybody came. At that point, we knew she was breathing; The little boy was okay because he was sitting with her.”

“They came and checked them out and took them to the hospital, but everyone is good and they are back home now. The EMTs came up to me after they realized that she was also pregnant and said, ‘You realize that you saved three lives today.’ They also told me that most of the time, it’s not a happy ending because by the time they get there, it’s too late, so I’m just so glad that I was where I was supposed to be on that Wednesday.”

As the statement clearly indicated, Jennifer’s faith is important to her. “It is important,” she said. “I mean, I don’t go to church every day, but I definitely believe in God and Jesus and everything that they do.”

“I know that my faith has definitely grown more since that day, because I know He made sure I had the right people that I needed that day. There would have been no way I could have done it on my own.”

A fundament of the Christian faith is that God will place specific people in specific places, for specific purposes, and at specific times to accomplish His will. Jennifer stated over and over that she believes that it wasn’t mere happenstance that she and Paul were taking the route past the pool at the exact time needed to save three lives.

“It feels amazing that He felt like I was strong enough to do it,” Jennifer said. “Yeah, I really do believe that. I mean, I feel like He gives you whatever you can handle, so He definitely knew that I could do it. I wasn’t sure I could, but He knew I could.”

Now, everybody in America knows it as well. This Panther is a hero…three times over.