“The Village Reporter” GAME OF THE WEEK: Edon Rolls Past Edgerton 49-22 In Season Opener 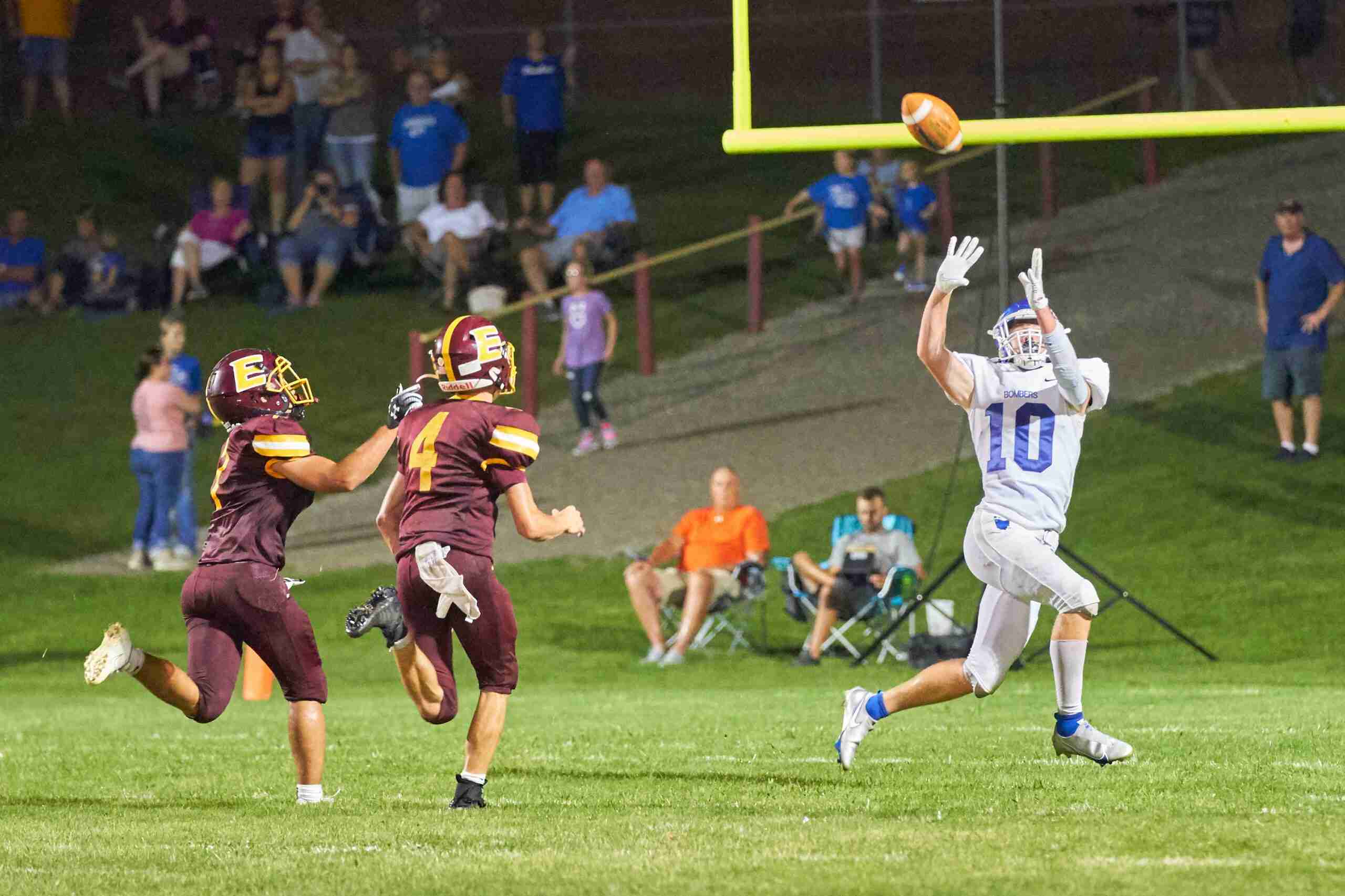 TOUCHDOWN CATCH … Edon receiver Caden Nester gets behind the Bulldog defense to snag a scoring strike from Drew Gallehue in the third quarter. (PHOTOS BY RICH HARDING, STAFF)

EDGERTON – The Bombers expect their offense to get the headlines this season, but it was the defense that scored the first points of the season.

Defensive back Ethan Steinke intercepted a pass by Edgerton quarterback Corey Everetts and took it back 42 yards for the first Edon score of the night as they went on to a 49-22 win at Stauffer Field. The win by Edon snaps a six-game losing streak to the Bulldogs.

Edon struck again on their next possession, after a 51-yard screen pass from Edon quarterback Drew Gallehue to Gannon Ripke, Gallehue went 24 yards to Henley Dye to make it 14-0.

Edgerton would turn the ball over on their next possession and that set up a six-play drive by the Bombers that ended with a Gallehue to Ripke six-yard touchdown pass to push the lead to 20-0.

The Bulldogs were able to find the end zone in the second quarter with Everetts tossing a pass down the middle to Carter Herman on a 26-yard touchdown play.

Edgerton would battle in the second half with their opening possession resulting in an Everetts to Kadyn Picillo 41-yard touchdown pass to trim the Edon lead to 34-14.

The Bombers responded though with a Gallehue to Steinke 22-yard screen pass for a score and following an Edgerton fumble, Gallehue capped off the ensuing drive with a four-yard touchdown run to extend the lead to 47-14.

Gallehue ended the night 22/35 for 414 yards with five touchdowns and Nester led the Bombers in receiving with 6 receptions for 151 yards and two scores. Edon (1-0) totaled 509 yards of offense on the night while holding Edgerton (0-1) to 230.

Everetts paced the Bulldogs offensively by going 7/15 thru the air for 146 yards and three touchdowns, Warren Nichols rushed for 59 yards on 15 carries, and Kadyn Picillo had two catches for 73 yards.

UP NEXT: Edon will host Antwerp next Friday in their home opener while Edgerton will travel to Hilltop.

Nate can be reached at pubisher@thevillagereporter.com