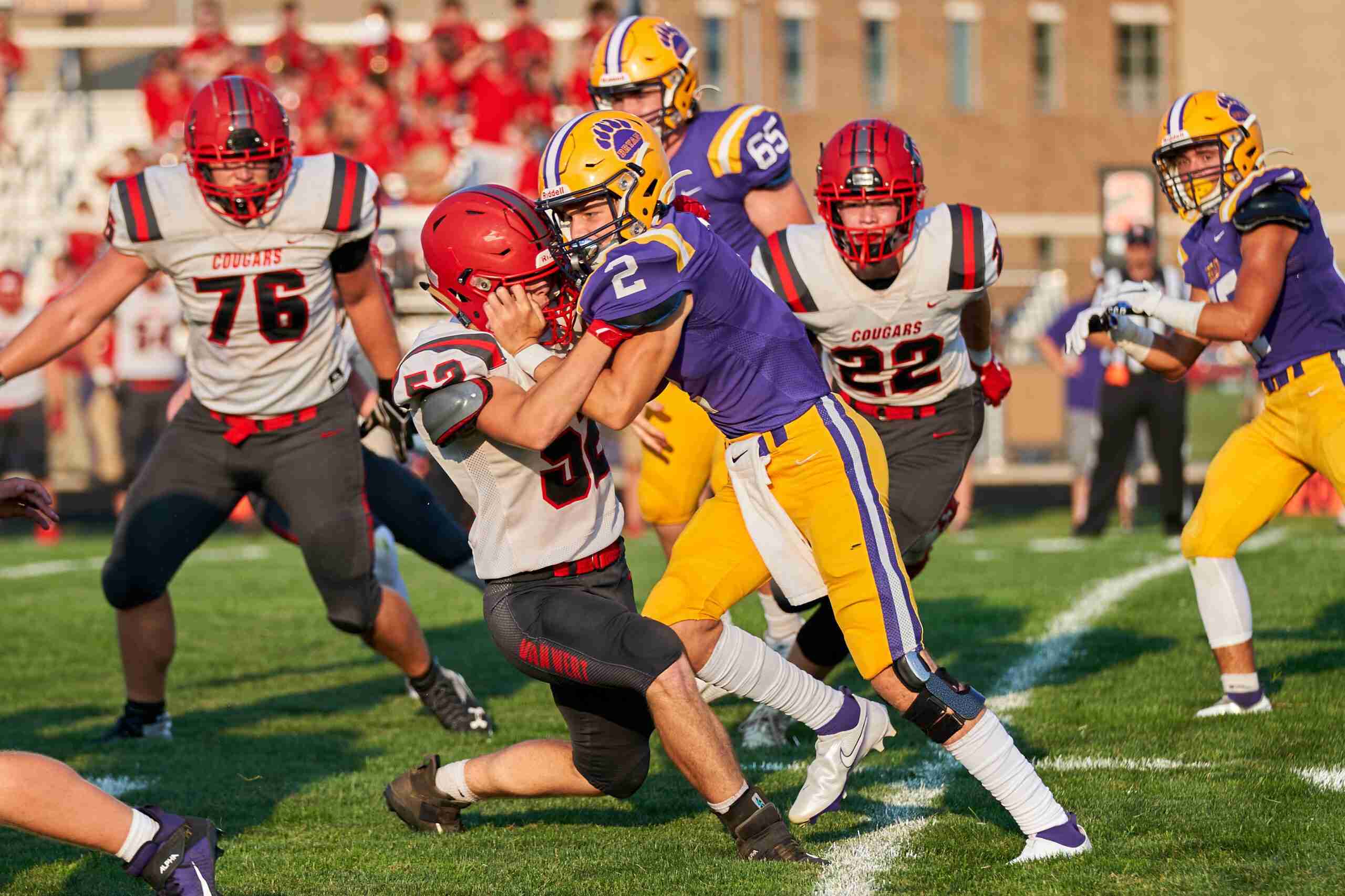 FIGHTING OFF TACKLE … Bryan’s Jase Kepler tries to fight through a Van Wert defender in the first half. (PHOTO BY RICH HARDING, STAFF)

BRYAN-After digging themselves a 27-0 nothing hole in the first half the Golden Bears battled back to within 40-28 before falling to the defending Division IV state champs. The Golden Bears defense started the comeback attempt as Noah Phillips recovered a fumble in the end zone for the first Bryan score of the night.

After a Van Wert touchdown to start the second half, Korbin Shepherd scored on a seven-yard run, Jase Kepler tossed a 55-yard touchdown pass to Trenton Wolfe, and Shepherd scored again, this time from three yards out, to cut the Cougars lead to 40-28.

That was as close as Bryan would get as Van Wert quarterback Aidan Pratt scored on an 18-yard run to seal the game.  Shepherd was the workhorse on offense for Bryan with 30 carries for 121 yards and two touchdowns while Kepler went 17/25 for 165 yards and a touchdown.

UP NEXT: Bryan (0-1) travels next week to Maumee to face the Panthers.

SHERWOOD – Elijah McCleod threw for 227 yards and four scores in his first game under center for Wauseon as they trounced Fairview 40-8. After a field goal by Tyson Rodriguez, McCleod fired scoring passes to Sam Smith and then to Jonas Tester on consecutive drives to make it 24-0. After a safety on a Fairview punt, McLeod found Tester one more time, this one covering 21 yards, to make it 33-0 at halftime.

GENOA – Archbold senior quarterback DJ Newman rusher for 159 yards, passed for 146, and accounted for three touchdowns in the Bluestreaks 27-0 win at Genoa. Archbold struck quickly as Newman scampered 64 yards for a score less than two minutes into the game to give them a 6-0 lead.

That remained the score until Newman found Charlie Krieger for his first touchdown pass of the night to put Archbold up 13-0 at halftime. After a scoreless third quarter, the Bluestreaks put the game away with a Newman to Krieger 10-yard scoring pass and a five-yard touchdown run by Carson Dominique, who finished with 86 yards on the ground.

UP NEXT: Archbold (1-0) hosts Liberty Benton next Friday.

DELTA – Down 12-7 at halftime, Ayersville dominated the second half and outscored Delta 20-0 to rally for the win at Panther Stadium. Jerremiah Wolford got things started for Delta with a four-yard touchdown in the opening quarter before the Pilots answered with a score in the second quarter to take a 7-6 lead.

The Panthers would retake the lead before halftime as Bryer Knapp punched it in from two yards out for a 12-7 lead. Josh Tresnan-Reighard carried the ball 14 times for 80 yards to lead the Delta and DJ Davis led the receivers with one reception for 46 yards.

UP NEXT: Delta (0-1) looks to get in the win column next week at Cardinal Stritch.

METAMORA – Evergreen put three touchdowns on the board in the second half, including one from the defense, to pull away for a 27-6 victory. Quarterback Payton Boucher scored the only touchdown for either team in the first half on a five-yard run in the first quarter to stake the Vikings to a 6-0 advantage.

Boucher struck pay dirt again in the third quarter on a two-yard run to push the lead to 13-0. The Evergreen defense would then open the fourth quarter scoring as Max Mossing scooped up a fumble and returned it 24 yards to the end zone as the lead ballooned to 20-0.

Boucher then added Evergreen’s final score of the night on a five-yard run to give him three rushing touchdowns on the night. Boucher rushed for 59 yards and was 17/21 passing for 182 yards.