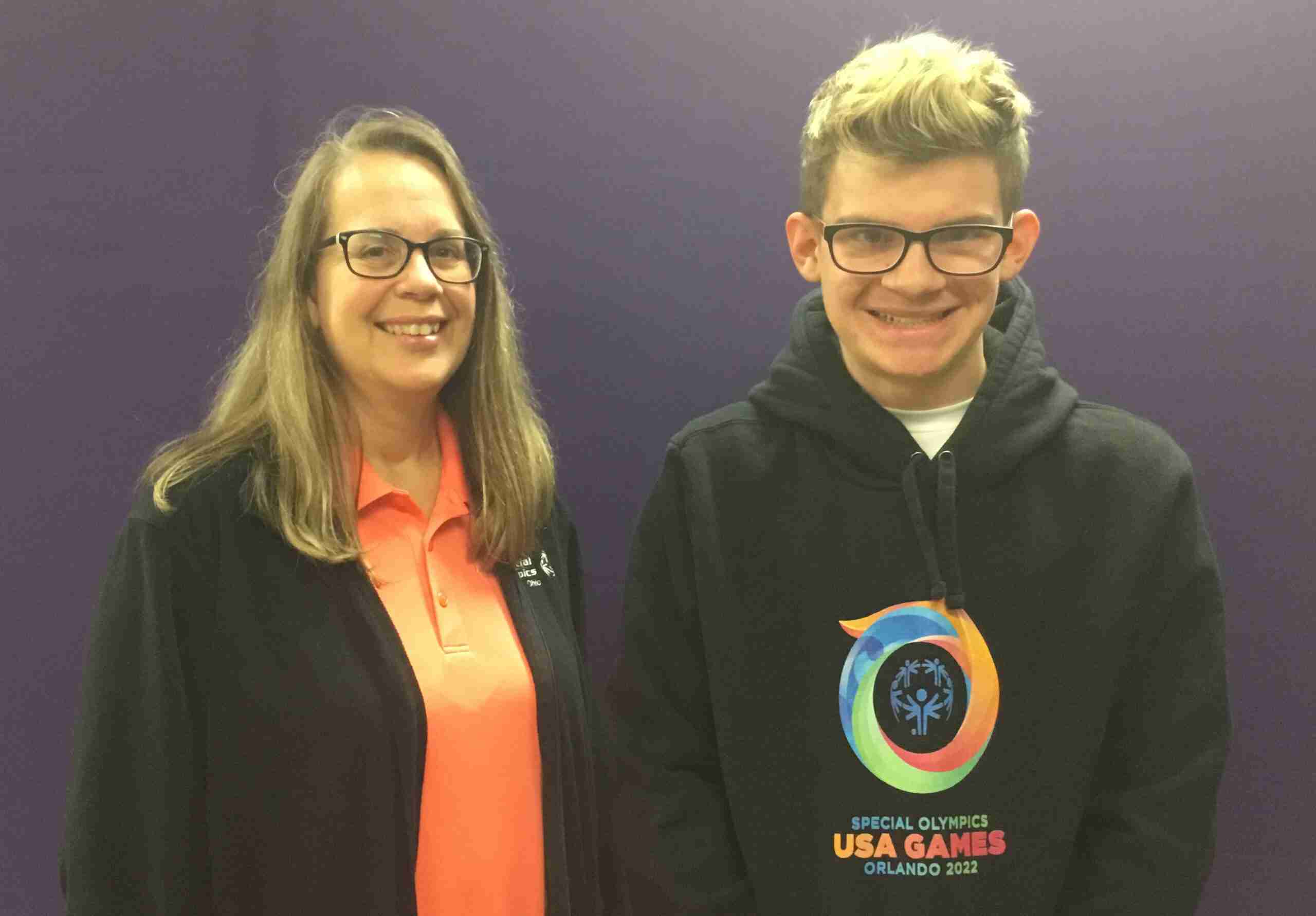 EXCITED AND PROUD … Angela Luke and Dawson Moore are both very excited to be going to the National Special Olympics in Orlando, Florida this June. Dawson will be representing the State of Ohio in Track and Field, while Angela is going as the Team Ohio Track and Field Coach. This makes History for Williams County, as they are the first to ever go to the National Special Olympics from the county. (PHOTO BY REBECCA MILLER, STAFF)

For the very first time, Williams County will have an athlete participating in the USA National Olympics, on Team Ohio.

Many have gone to the State Special Olympics in Columbus over the years, but Dawson Moore, who will be 17 at the end of April is the first Special Olympics athlete from Williams County to ever represent the State of Ohio in the USA National Olympics.

He is very excited about this amazing opportunity and about making Williams County history.

Dawson is a runner and will compete, in Orlando, Florida in June this year, in the 1500 meter, 800 meter and mini javelin competitions. On his birthday weekend he gets to go to Ohio State for training with the rest of Team Ohio.

Ohio State is his favorite football team so he is thrilled to get to go there. That alone is a thrill, but then going on to Orlando to run in the National Special Olympics is overwhelming.

A delightful video of Dawson being informed that he was chosen, can be seen on the Special Olympics of Williams County FaceBook page.

His father Kaleb said that Dawson loves to run and is a long-distance runner at Bryan High School. His parents, Kaleb and Denise, got him involved in Special Olympics where he has blossomed as an athlete.

At the urging of Bryan Special Education Coordinator, Julie Taylor, they also signed him up for Track and Cross-Country with the school teams. “He can’t really compete in that forum,” his father said, “but he always finishes.”

Being in Special Olympics has given Dawson an opportunity to succeed with his running. Dawson attends Bryan High School in a self-contained Cross Categorical classroom, based on an IEP (Individual Education Plan), with around 6 other students, one teacher and multiple aides.

“One interesting thing about Dawson,” his father said, “is that you cannot tell he has multiple handicaps by looking at him. His struggles come from a number of issues that have been diagnosed over the past sixteen years, and are all brain related.

He has ADHD, is on the Autism Spectrum, and has Central Auditory Processing Disorder, which means he hears partial sentences, not whole thoughts and has trouble processing what he does hear.

Dawson also has an anxiety disorder and a mild intellectual disability.” He pointed out that the conglomerate of all of these makes it hard for Dawson to process fast enough or carry through to ongoing processes.

Both Kaleb and Denise graduated from Montpelier High School, in 2000 and 2001.They have been married for nineteen years and have two children, Dawson and his eleven-year-old sister.

They will be going to the USA National Olympics as a family and look forward to whatever that entails.

Another aspect of life for this family is the importance of being kind and generous so even though Dawson gets to go to the National Games for free, he is participating in the State of Ohio fund raiser for the games.

He is not required, but they believe it is very important to give back.  The fund raiser is a Special Olympics website with his own page where people can go and make donations.

Before he left, he asked Mrs. Luke if she would be interested in coaching at the National games. She is happy to get to participate in that way and looks forward to the event in June.

Part of Mrs. Luke’s background included being a track and field assistant coach with Mark Blue in Edon as well as spending five years in Special Olympics with WCDD.

She was hired 23 years ago and those five years were near the beginning of her career with WCDD. She got back into Special Olympics two years ago officially, but for the past fifteen years she has volunteered at area meets.

She is a full time Developmental Specialist for Early Intervention, but loves being involved with sports as well.

While Vermillion was at the Bryan Field Day he also got to see Dawson run, so when an opportunity opened for a long-distance runner, he asked Mrs. Luke if Dawson would be interested in being in the National Special Olympics.

Angela Luke and Dawson will be at Ohio State in Columbus for three days of Training Camp at the end of April, with the rest of the 140 in the Ohio Delegation.

Six of those are in track and field, with Dawson Moore being one of them. The time in Columbus will also give the students and parents an opportunity to see how it will be to be apart in Orlando in June.

They will be in Florida from June 3-12 and during that time Dawson will stay with the Ohio delegation.

His family will get to see him at the track when he is competing. They are so proud of him and excited for this amazing opportunity.

Congratulations Dawson Moore and Angela Luke! Williams County will be waiting to hear how it goes. Represent!