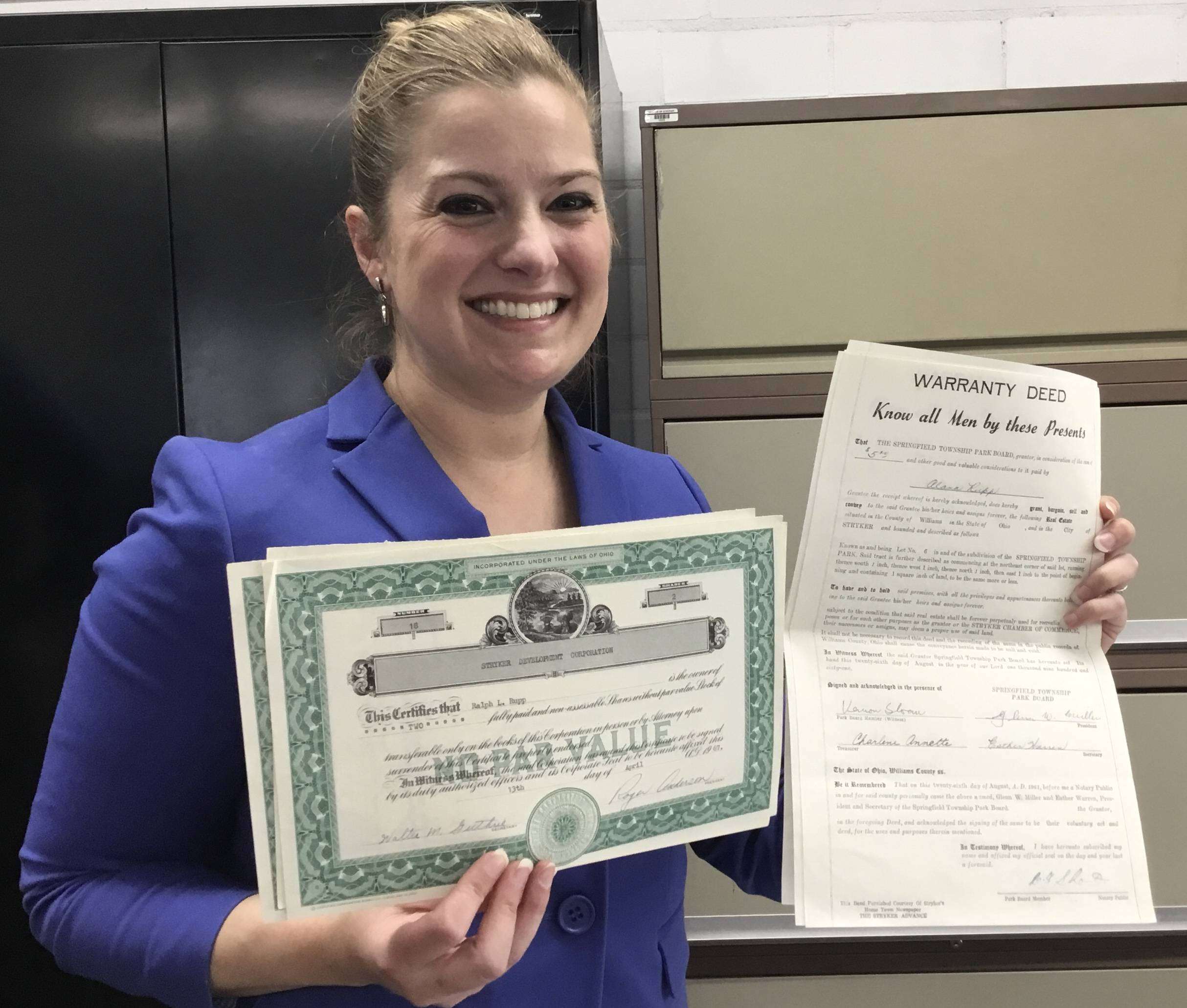 HISTORICAL FIND…Ms. Katie Rakes, the village attorney for Stryker, Ohio, holds up the papers that were found while going through her grandparents’ belongings.  Those on the left, of which there were five, say, “This certifies that Ralph L. Rupp is the owner of two fully paid and non assessable Shares without par value Stock of Stryker Development Corporation, transferable only on the books of this Corporation in person or by Attorney upon surrender of this Certificate properly endorsed.  In Witness Whereof, the said Corporation has caused this Certificate to be signed by its duly authorized officers and its Corporate Seal to be hereunto affixed this 13th day of April 1967.” They are signed by Walter M. Guthrie, Secretary and Roger Anderson, President. Each one was for two shares and this one was Share Number 18.

Those on the left, of which there were three, are Warranty Deeds.  They say that “the Springfield Township Park Board, grantor, in consideration of the sum of $5.00 …paid by Alana Rupp…assigns forever, the following Real Estate situated in…Stryker….”  Each one was for 1 inch of the park and were “subject to the condition that said real estate shall be forever perpetually used for recreational purposes or for such other purposes as the grantor or the Stryker Chamber of Commerce, their successors or assigns, may deem a proper use of said land.” They were signed on August 26, 1961 by Vernon Sloan (park board member), Glenn Miller (Park Board President), Charlene Annette (Treasurer) and Esther Warren (Secretary). (PHOTO BY REBECCA MILLER, STAFF)

Not realizing what an important moment it would be, right at the end of the May 17, 2021 Stryker Village Council meeting, Village attorney Katie Rakes showed some historical paperwork to the council.

“I wasn’t sure who might want these, but recently our family was going through all of my grandparents’ things, and we found these,” she said. Ms. Rakes grandfather Ralph L. Rupp passed away on May 9, 2009 and then her grandmother, June Rupp, on January 21, 2021.

Rakes said she wasn’t sure if they are important papers, but didn’t want to throw them out without checking. Mayor Joe Beck and all present highly recommended that she donate them to the Depot Museum, which is cared for by the Stryker Area Heritage Foundation.

It was wondered aloud how many others of those might be in old attics of Stryker and if anyone in Stryker remembers the history of the Corporation.

A chuckle was enjoyed by all when she said that the Warranty Deeds were each for just 1 inch of the park property. Another fun part is that the pieces of the park are “to have and to hold, with all the privileges and appurtenances thereunto to belonging to the said grantee and his/her heirs and assigns forever” so Ms. Rakes owns three inches of the park in Stryker.

Ms. Rakes thanked them for their advise and said she will proceed by calling Terry Wieland.

Council meeting began at 6 pm with Pastor Nick Woodall, of United Brethren Church, opening in prayer and Mayor Beck leading in the Pledge of Allegiance. The Prior minutes for April 19 were approved, as was the finance report.

A Motion to write off one third of the income tax collection fees was also approved. Fiscal Officer Beth Rediger explained that seven accounts are still with the lawyer who has been collecting back taxes for the village.

Now that the village has switched the collection to the Attorney General’s office, this will no longer need to be done, but until these seven are collected, the village will be paying the lawyer one third of what is collected.

Rules were suspended and Ordinance 2021-01 was passed, Revising the Permanent Annual Appropriations to add K9 donations of $1150 to the budget. Mayor Beck stated that having the K9 unit available is a huge asset to the community.

Rediger informed council that the Audit is almost complete and the estimated cost is $3,034. There is a potential for another round of COVID money for the village which would come in two parts of $250,000 each and could be used for water, sewer or broadband.

There was some discussion of using it to do the Johnson Street project, and Village Administrator Al Riegsecker said it would cover that whole project. Rediger also shared some sign options with the council for the possible sign out front of the village hall.

Record Committee Meeting was held on April 19, 2021, and Council voted to approve the minutes. Rediger reported that all the paperwork was approved by the Historical Society and Disposal is in process for those on May 20.

Riegsecker said in the last thirty days they had two major pieces of equipment break. One was the 12 year old Well Motor which has to be replaced at estimated cost of $6000.

The other was the 18 year old dehumidifier at the Water Plant and will cost $6700. He said hopefully they will last for fifteen years. Dead tree and Grass ordinances violations have been sent out and the crew will take care of them if no response.

Police Chief Steve Schlosser reported that Firearms Qualification will be conducted on June 2 and 3, with him as the instructor for West Unity, Pioneer and Edon departments as well as Stryker.

On June 7-10 he will be attending the Ohio Tactical Officers Association Conference in Sandusky, rectifying as an instructor in Less-Lethal Munitions and Pepper Spray. For the month of April 19 through May 17, there were nine traffic warnings, two traffic citations, and two adult arrests.

Military Banners are going up soon and Mayor Beck said to contact the village if you have any questions. National Law Enforcement Week was held and he thanked the Stryker Police Department for their good work.