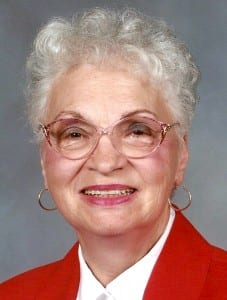 Virginia graduated from the St. Vincent School of Nursing in 1948 and loved working in the nursery at St. Vincent Hospital after graduation and until she started her family.  She continued to work for the Nurses Registry of Toledo for 30 years, doing private duty in homes and hospitals.  She served as secretary, president and on the board of directors of the Registry over those years.  Many of Virginia’s children followed her footsteps into the health care field.

A devoted mother of seven, she was dedicated to her Catholic faith and was an active member of Blessed Sacrament parish for most of her life.  She sang in the choir at Little Flower Catholic Church, where her brother was a priest, and later in life became a parishioner at St. Joseph Catholic Church in Sylvania.  In her spare time, she enjoyed gardening and travelling.

Arrangements were handled by Krill Funeral Service, 114 East Hull Street, Edgerton, Ohio 43517.  Services were held at St. Mary’s Catholic Church in Edgerton, Ohio, on Wednesday, August 29, 2012.  Friends and family could call prior to the service at the church.

Memorial contributions may be made to St. Mary’s Catholic Church, 133 West Bement Street, Edgerton, Ohio 43517, or Hospice of Northwest Ohio.
To sign the online register or to send condolences, please visit www.krillfuneralservice.com.