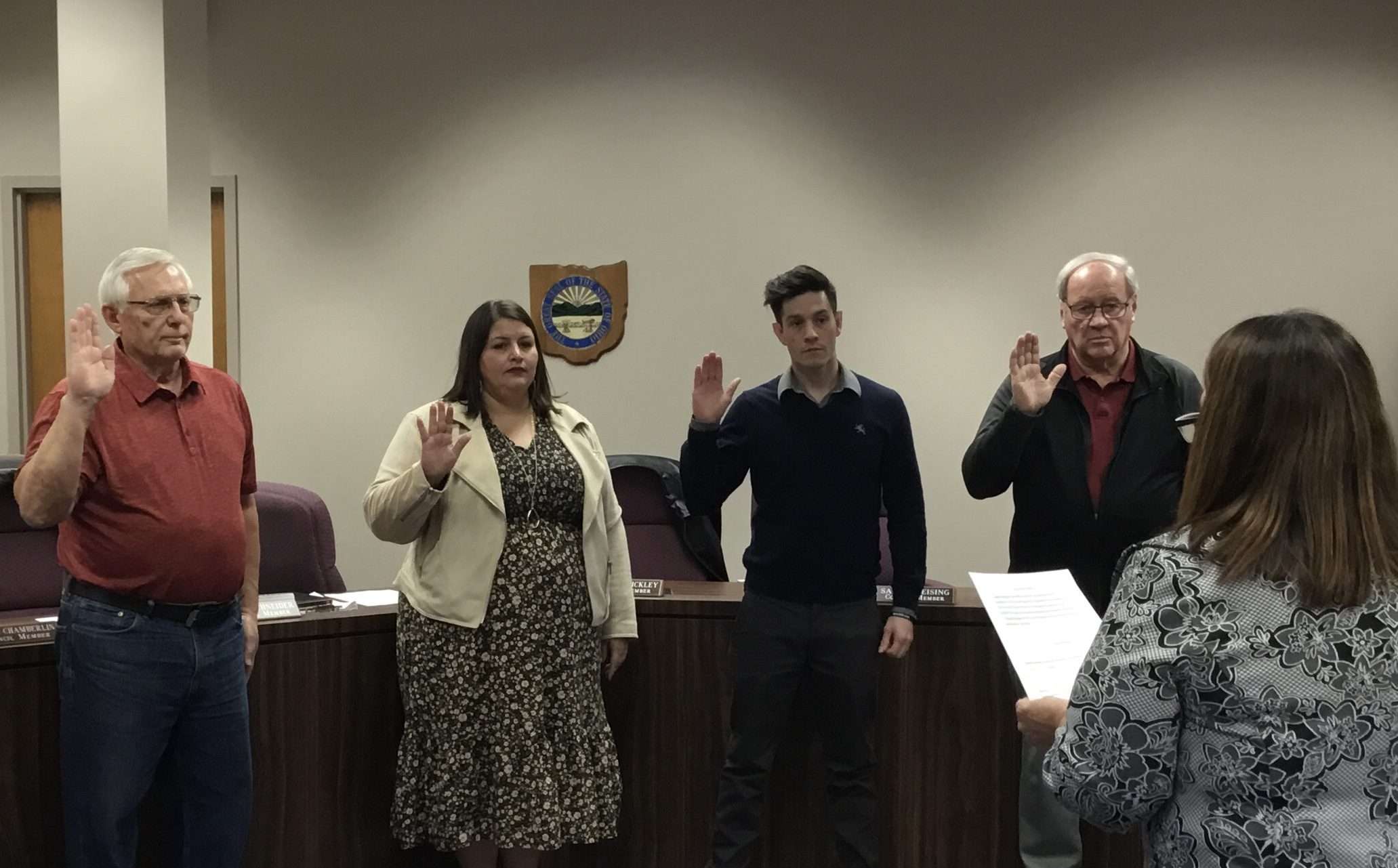 Wauseon City Council opened the new year, 2022, with Mayor Kathy Huner standing before four people with their hands raised to take the oath of office. There are different stories of how they got there and how long their term will be.

Council members Harold Stickley and Steve Schneider have been on council for one term of four years and were both re-elected on the ballot in November for another term.

Sarah Heising had already put her name on the November ballot, and was scheduled to run for council, when the sad news came that council member Jeff Stiriz had passed away.

Wauseon Council asked her to fill his seat temporarily, which she willingly did. On December 31, 2021 she stepped down from that seat, as she had been elected on the ballot in November to fill the vacated seat which had been held by Patrick Griggs.

That left Jeff Stiriz’s seat to be filled, to complete his two-year term, so council asked the community for letters of interest from anyone who might want to join council.

Only one letter was received, and council interviewed the interested person, Brandon Tijerina. He filled all of the qualifications for a council member. They appointed him to fill the seat for the next two years.
If he wants to stay on Council he can run on the ballot to be elected in 2024. These four join council members Shane Chamberlin and Scott Stiriz, forming a full council.

In organizational business, council elected Scott Stiriz to be the President of Council for the coming year, with motion made by current president Shane Chamberlin and seconded by Council member Steve Schneider.

With no individuals wishing to address council, the meeting moved on to Committee Reports. Heising mentioned that she would love to get tours of the departments and Mayor Huner said that she had already spoken with the department heads and they are open to that on January 17, 2022. President Stiriz thanked the mayor for setting that up.

Fire Chief Rick Sluder reported that they have started the new EMS contract for the year and it has gone smoothly.

They are waiting to occupy the new central station as they are waiting for a spring to put in the new garage door, due to back up of product delivery. Exams for entry level had two sign up, but neither have paramedic level, so they need some recruits who do.

Police Chief Kevin Chittenden informed council that they are still going through the hiring process for a full-time position. Holidays went smoothly and they are transitioning with end of year and entering the new year.

Keith Torbet, Director of Public Service, said that the new public works employee, Mike Riegsecker, started on January 4, 2022. He was hired from the seven who took the test.

They are working on getting down all the Christmas decorations around town. There were a couple water breaks over the holidays that have all been repaired.

There was some discussion about filling the EPA required position of a Class 3 operator at the water plant. He assured council that the people who are working presently are very well trained and are doing well.

Director of Finance, Jamie L. Giguere, is closing out the 2021 year and keeping up with the work. She said she will have a spread sheet at the next meeting to show the income tax numbers, and informed council that “they came in at 4.4 million dollars this year which is 16% higher than 2020 and 3.8% higher than the highest year which was 2017.” She commended the office workers for doing a great job.

Director of Law, Tom McWatters said they are continuing to work on some background stuff on the tiff to keep it moving forward. The financing can be pursued and they will have three readings for that.

Also, the labor attorneys are working on getting a negotiator to work on negotiations with the police department and they anticipate that for the end of the month. Progress has been made and it is primarily the wage issue that needs to be hammered out.

In legislative business, they voted to approve:

-Second reading of Ordinance 2021-13 Ordinance providing for a City Law Director: Assistant Law Directors; and Setting a rate of Compensation (no changes)
-Third and final reading of Resolution 2021-16 Authorizing the Mayor to Issue a Request for Qualifications for an Engineer
-New Business – Motion to schedule a Public Hearing on the Seneca Drive tax incentive ordinance for January 17, 2022 at 5 p.m.

Council member Harold Stickley and Mayor Huner brought it to the attention of all present and the public that Curt Fauver, who was a former mayor of Wauseon, just passed away from COVID.

He was mayor between Mayor Matheny’s terms, from 1986-91. “He loved the City of Wauseon and was very active in anything that was outdoors.”

“He served the city, loved the city very much and this was a huge loss,” Mayor Huner said. “The city would like to extend their condolences.” Torbet added that Fauver swore him in as a new officer in 1987.

With nothing else, they adjourned.