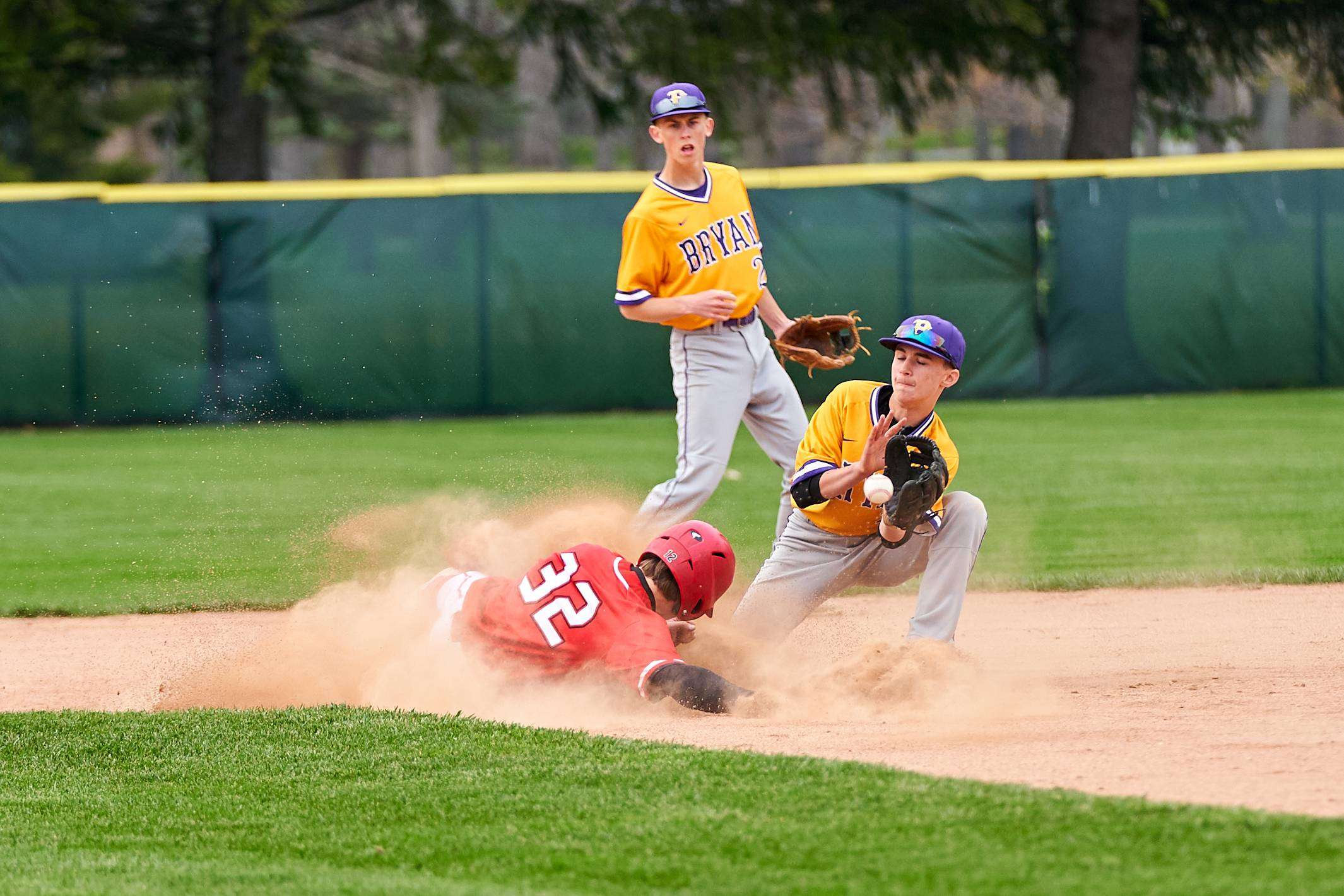 GETTING DIRTY … Jude Armstrong slides into second base ahead of the tag by the Golden Bears second baseman. (PHOTO BY RICH HARDING, STAFF)

BRYAN-Wauseon scored all their runs in the first two innings and Maddux Chamberlin pitched the final three innings to get the save as Wauseon knocked off Bryan 6-4.

Wauseon’s first batters of the game all reached base before Kolton DeGroff hit into a fielder’s choice that scored Jude Armstrong and Eli Delgado to give Wauseon a 2-0 lead. Wauseon added one more run in the inning on a sac fly to right by Sam Krasula to make it 3-0.

Bryan responded quickly in their half of the opening inning though as Breven Deckrosh started things with a single and he would eventually score when Mikey Wolff reached on an error to make it 3-1.

With two on and one out, Keith Huard laced a double to right field, scoring Quinn Brown and Wolff to tie the game 3-3.

The Indians loaded the bases again in the second, this time with two outs, and DeGroff would deliver with an infield single to put Wauseon back in front at 4-3.

The Indians tallied two more runs in inning as they scored on an error by the Bryan shortstop and then starting pitcher Clay Stump drew a bases loaded walk to increase their lead to 6-3.

Wauseon threatened again in the fourth by putting runners at second and third with one out. The Golden Bears escaped the inning as Stump fouled out to first base and Connar Penrod grounded out to the pitcher to end the inning.

The bottom of the fourth proved to be the final scoring threat of the night by Bryan as they would load the bases with no outs.

Stump though worked out of the jam allowing just one run as Breven Deckrosh would strike out, Quinn Brown grounded into a fielder’s choice to score Nolan Kidston from third, and Wolff struck out to end the inning.

Maddux Chamberlin entered the game in the fifth inning in relief of Stump and would stymie the Bryan bats.

Over the final three innings, Chamberlin held Bryan hitless while striking out five to get the save and move the Indians record to 7-4 overall and 3-0 in the NWOAL.

The Wauseon offense was paced by Stump and Armstrong with two hits each and DeGroff finished with three RBIs.

Breven Deckrosh finished with two hits for Bryan (4-8, 2-1) and Huard had two RBIs.