By: Bill Bray
THE REPORTER 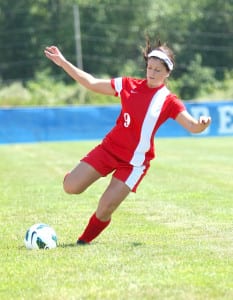 On a beautiful Saturday afternoon, the Wauseon Lady Indians soccer team came out as hot as the weather and quickly disposed of the Defiance Lady Bulldogs 8-0.
The scoring rampage got started when Katee Roberts sailed the ball over the Defiance Keeper’s head at the 34:42 mark. Roberts followed that goal just seconds later, 19 to be exact, as she caught the Keeper out of the box for an easy goal.

Just over two minutes later with 32:01 remaining in the first half, Marin Schaffner smacked a long kick from beyond the 18 again going between the Keeper’s head and the top of the net for Wauseon’s third goal.
Just over 30 seconds later Lydia Schmucker, from her wing position, added to Wauseon’s lead. Morgan Murry then got an assist from Schaffner to make it a 5-0 advantage at the 20:48.
Another long kick from Schaffner, trickled by the Keeper again at the 15:51. The final Indians goal of the half came from Stephanie Whitman with 3:35 left and the Tribe had built an insurmountable lead.

The final goal of the game came from Sara Rufenacht with 20:14 remaining. She was assisted by Roberts.
Wauseon finished with 18 shots on goal and 13 shots on target.
“This game was a good opportunity to build up some confidence offensively and involve multiple people,” coach Kelsey Newman said. “We committed to coming out and playing with intensity from the first whistle and that showed when we were able to get some early goals. Katee Roberts and Marin Schaffner had a particularly good game, each with two goals and an assist.”
The Indians return to action Thursday when they travel to Bryan to take on the Lady Golden Bears.

WAUSEON – After their opening loss to Continental, Wauseon Head Coach Kelsey Newman said, “I think once we tweak a few things we can look forward to a strong, competitive season.”
Miller City came to town on August 20 to test the ‘tweaks’, and much to their chagrin found them to be in good working order. Senior goalkeeper Katie Spieles posted a shutout with 6 saves, and the Lady Indians found the back of the net five times in a 5-0 mashing of Miller City.
The Indians’ goals were tallied by junior Natalie Koenig, senior Morgan Murry, senior Katee Roberts, junior Lydia Schmucker and senior Marin Schaffner.