Wauseon Youth Football To Honor Veterans Under The Lights 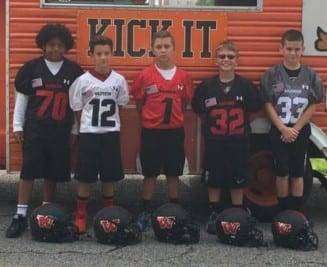 The boys in the Wauseon Youth Football League will be paying tribute to local veterans in a special night at Harmon Field.

The league will play two games beginning at 6 p.m., Saturday, Oct. 15 and as part of the tribute will be wearing special U.S. flag emblems on their helmets and jerseys. Admission is free.

This is the 17th year for the league which was founded by three men, Rick Stidham, Tod, Emerson and Bob Norris. The league now has four commissioners, Mike Avina, Gaze Carroll, Pat Martin and Bill Orzechowski.

But the special part of the evening will be the tribute to the veterans, he said.

“We will honor any World War II veterans. We are going to announce their names between games,” Orzechowski said. “They will have a special area in the handicapped section of the bleachers to sit in.”

WMTR 96.1 personality Kevin Stamm will be announcing the games.

The league has an assistant coach who is a veteran. Bret Mozena served with the Army in Afghanistan.

Concessions will be offered by Jan’s Hot Dogs of Toledo.