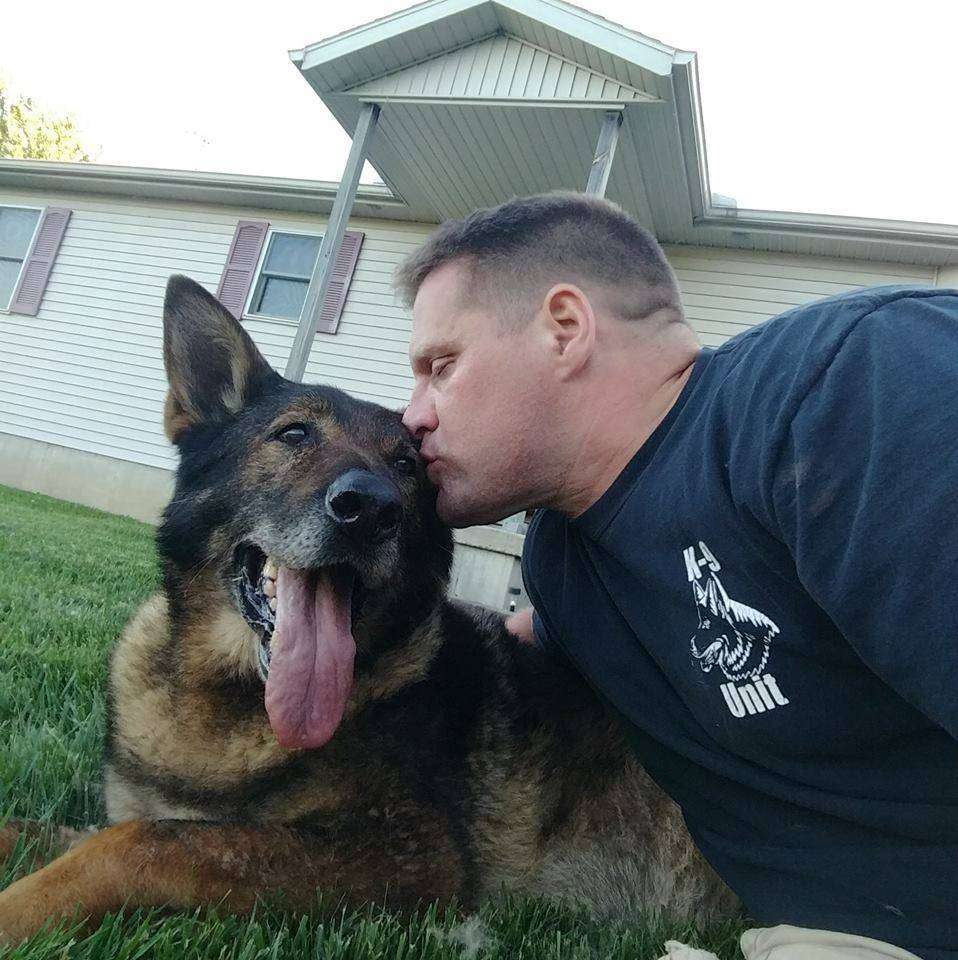 FINAL HOURS … The bond shared by Deputy Scott Shuping and Max transcended that of law enforcement partner or faithful friend, although that bond was comprised of both elements.

“At the end of the day people won’t remember what you said or did, they will remember how you made them feel.” ~ Maya Angelou

Introspection can be a very revealing process, especially when dealing with someone who has left his footprints upon your heart. This process does not discern the taxonomy of those who leave those impressions, whether they be footprints…or paw prints. The introspection process has been underway at the Williams County Sheriff’s Office (WCSO) since June 13, with the passing of recently retired K-9 officer, Max.

At the end of the day on November 9, 2017, when Max took his final official patrol with his partner of ten years, Deputy Scott Shuping, nobody could have envisioned that his retirement would have been cut short in the manner in which it was. This was especially true for Deputy Shuping, who not only watched a partner cross over the rainbow bridge, but a family member. His introspection is proof positive that when it came to Max, this born in Czechoslovakia German Shepherd was never at any time, ‘just a dog’.

Reflecting back, Deputy Shuping began by saying in a voice shrouded in thought, “It’s not what I wanted to happen, but I’m coming to terms with it better.” There was certainly a lot to be pondered. Deputy Shuping came to the WCSO from the Henry County Sheriff’s Office in 2006.

When he arrived, being paired with a K-9 unit was the last thing on his mind, but that soon changed. “I worked with (Deputy) Mic (Frisbie) a few times when he was training; it just seemed interesting,” he said. “He had (K-9 unit) Ozzy at the time. (Deputy) Marvin (Hug) had (K-9 unit) Hammer. When Marvin retired, Hammer went to Mic, and then I got the new dog because Mic retired Ozzy.” Shuping and Max were officially teamed up in 2008, and Max retired from service last fall after K-9 Unit Ruin came aboard with the WCSO.

While it is common for law enforcement officers to work as partners, it takes a special bond for an officer to work and train together with a K-9 Unit. “It’s probably easier,” Shuping said. “Once you develop that relationship with the dog, they’re unconditional. They’ll do anything that you ask.”

“It’s probably easier training with a dog than a human, because the dog basically wants to please you. The training is continuous. You can’t put a number on the hours, because it’s a continuous thing. You basically train every day, but we’re dedicated to the 16 hours a month that the state likes to see. We have to recertify with the state once a year.”

After his retirement, all the regimentation of public service was taken off from the hairy shoulders of Max, leaving him, according to Shuping, with days of, “…relaxing in his kennel, laying around the yard, and pretty much just being a dog.” After a decade of service to the citizens of Williams County, Max was finally getting to experience a dog’s life. Sadly, that life was cut horribly short.

“With the symptoms that he had,” Shuping said, “…they believe that he had a tumor, or some kind of growth in his head that was putting pressure on his brain. They didn’t run a CAT scan, because obviously it’s expensive to do a CAT scan on a dog.”

“The day that I found him, he had a major seizure. We tried medication, and I can’t say enough about the Bryan Animal Hospital…Dr. Luc Hesselschwardt and his wife, Rachel. They went above and beyond what any vet would do. The day it happened, it was early when I got home. We have their personal cell phone numbers, so I called Dr. Luc right off the bat. He didn’t hesitate. He said, ‘I’m getting around; just meet me at the office.’

“They kept him for days to keep an eye on him. They had him on camera so they could check up on him while he was there. The day of the thing, it was late when I got home. I had training in Toledo, and when I got back, I made the decision. So I called him, and he said, ‘I’ve got a few little things to do, so I’ll call you as soon as I’m available, and I’ll just meet you at the office.’ It was 9:30 at night on the 13th. Like I said, they go way, way above and beyond for these dogs. They really take care of us.”

The voice of Deputy Shuping became quieter as he delved further into his introspection of the events of June 13. “It was tough at first,” he said. “It was a hard decision to make, but I think that it was the right one. At least now I do. I had to convince myself of that for a while. It was tough, but it’s getting better now because it was probably for the best.”

“The day that I made the decision, you could tell that he wasn’t very happy. When I threw his toy, and he wasn’t interested in it, I knew that something was wrong. He didn’t even care…not at all. He wasn’t himself. He was in some pain…the pain of not knowing what was going on. Sometimes he would look like he was lost. It took a lot to make that decision…a lot. I’ll tell you, it was tough…really tough.”

“I just couldn’t see him the way that he was. He just wasn’t himself.” That toy that Shuping described was the Kong, and it was the most prized possession of Max. When he brought it to you, slobber and hair covered that it might have been, your status was elevated to that of a trusted playmate.

For being just a big hunk of molded rubber, that Kong was worth its weight in gold to Max. Looking down in thought, Deputy Shuping, a bachelor himself, said, “I spent more time with him than I did with my immediate family…at least eight hours a day in the vehicle together. Every day…for ten years. And the time that we weren’t at work, we were still at home together.”

“If I was outside doing something, he was outside.” Through his words, the unseen became obvious. Max left his slobber-covered Kong in the lap of some, and on the desks of others at the WCSO. He left his paw prints upon the hearts of everyone though…no one who knew him was exempt.

Deputy Shuping closed his recollections by turning to their accomplishments. “He was a good dog,” Deputy Shuping said. “He made me look good on a lot of different occasions.” Some of those occasions didn’t just change lives. Working together as an inseparable tandem, Deputies Shuping and Max also saved lives.

“When we found that Alzheimer’s patient…that was one of the best,” Shuping said. “We got a call,” he began. “Me and Mic were working third shift. We got a call that an elderly lady, an Alzheimer’s patient, ended up crawling out of her window, and left the house. This was like 4:00 in the morning. It was raining; it was cold. We tracked her, and found her.”

“Then we had a pursuit with Defiance County one time. The guy wrecked his vehicle on County Road 15 and took off on foot. We tracked him, and we found him. The last couple of years, he was rock solid. When we went out to look for something, we found it.”

And so the days of Max have passed. He will of course be remembered for his lifesaving work at the side of Deputy Scott Shuping. He will always be remembered with the greatest of fondness for the way that he made the people feel with whom he interacted. On that criterion alone, Max has attained immortality.