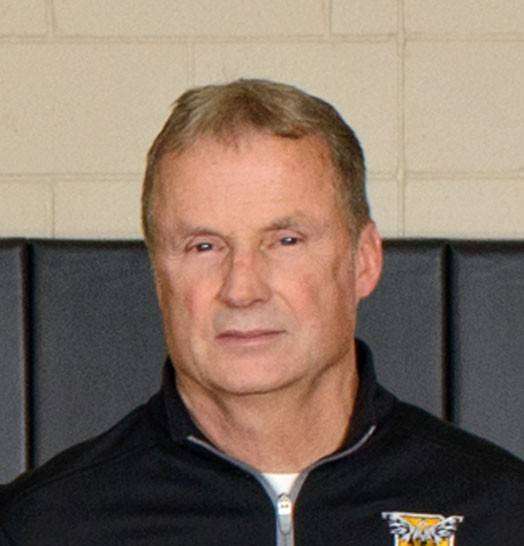 After a highly successful 37 years, Tom Wagner recently submitted his retirement notice as the cross country and track coach for the Pettisville Blackbirds. Wagner began with the cross-country team as an assistant in 1981 and then took over as the head coach in the fall of 1982.

He then offered to help the then track coach Joe Wonstetler during the 1981-1982, which Wonstetler accepted but then turned the program over entirely to Wagner in the winter of 1981-1982.

At the time the track program only had 3 or 4 kids according to Wagner, so his first task was seeing exactly how many kids he could get to come out for track. There were 37 kids who came out for high school track that first season despite the school not having a track to run on or any real equipment to speak of.

Starting out they had just three hurdles, drew circles on the pavement for shot put and discus, the team’s speed workouts were run around the softball diamond, the parking lot served as a runway for the long jump with the kids jumping into fill dirt, and they also filled a big net full of old foam footballs and basketballs for a high jump.

“We joked about using the next door cemetery’s tombstones for hurdles”, he recalled. “We went to out first tri-meet with Stryker and Hilltop with most of our kids never seeing a track. We won that tri-meet basically on the strength of our distance team”, added Wagner.

Pettisville’s first track came along in 1990 with an all-weather track being installed in the summer of 2006. “I cried when they put down the asphalt for the all-weather track in 2006, thinking about how far we had come in the program, from no track to an all-weather track. It was a bit akin to the Berlin Wall coming down, I didn’t think I would see it in my lifetime”, Wagner fondly remembered.

Despite not having much in the early days, Pettisville enjoyed tremendous amounts of success under Wagner’s guidance. The girls track team has won 14 BBC titles, one District championship, and one Regional co-championship while boys track has captured seven BBC titles, a state championship in 1991 and a third-place finish at State in 1990.

The success can also be found with the cross-country teams as well with the girls staking claim to 12 BBC titles, seven District championships, Regional runner-up three times, and solid performances at State with a third in 1983, 11th in 2015, 4th in 2016, and a 6th place finish in 2017. For boy’s cross country, they have won eight BBC championships, one District title, one Regional title, were eighth at the state meet in 1981 and finished seventh in 2007. Wagner was named the District Coach of the Year in 2007 for boys’ cross country and again in 2017 for girls’ cross country.

Over the years Wagner has had numerous athletes claim individual championships or place at State competition, but it was an accomplishment that had nothing to with a trophy was what he mentioned as one of his most memorable moments.

“We had a young man suffering from diabetes many years ago. He looked more like a guard in football than a distance runner, short and stocky. I remember him working so hard running year around. His senior year he had cut his insulin intake by 50%. At district, he ran a 4:50 in the 1600 at Districts. Now, that’s nothing to write home to mother about, it won’t come close to getting you out of districts. However, it was the first and only time he broke a five-minute mile. It was his goal, I was so proud of him that I leaped over the fence to hug him”, he said.

Wagner said that obviously the kids will be the biggest think he misses about coaching, but he was also very appreciative of the community support. “It’s been a fun ride all these years. I want to thank the Pettisville community for allowing me to be a small part of their children’s lives these past years”, Wagner commented.

As far as his future plans, there’s plenty of things on his list including traveling to New England to see the fall colors, taking an Alaskan cruise, doing some reenacting of the Civil War with a group from east of Toledo, and also doing some substitute teaching.