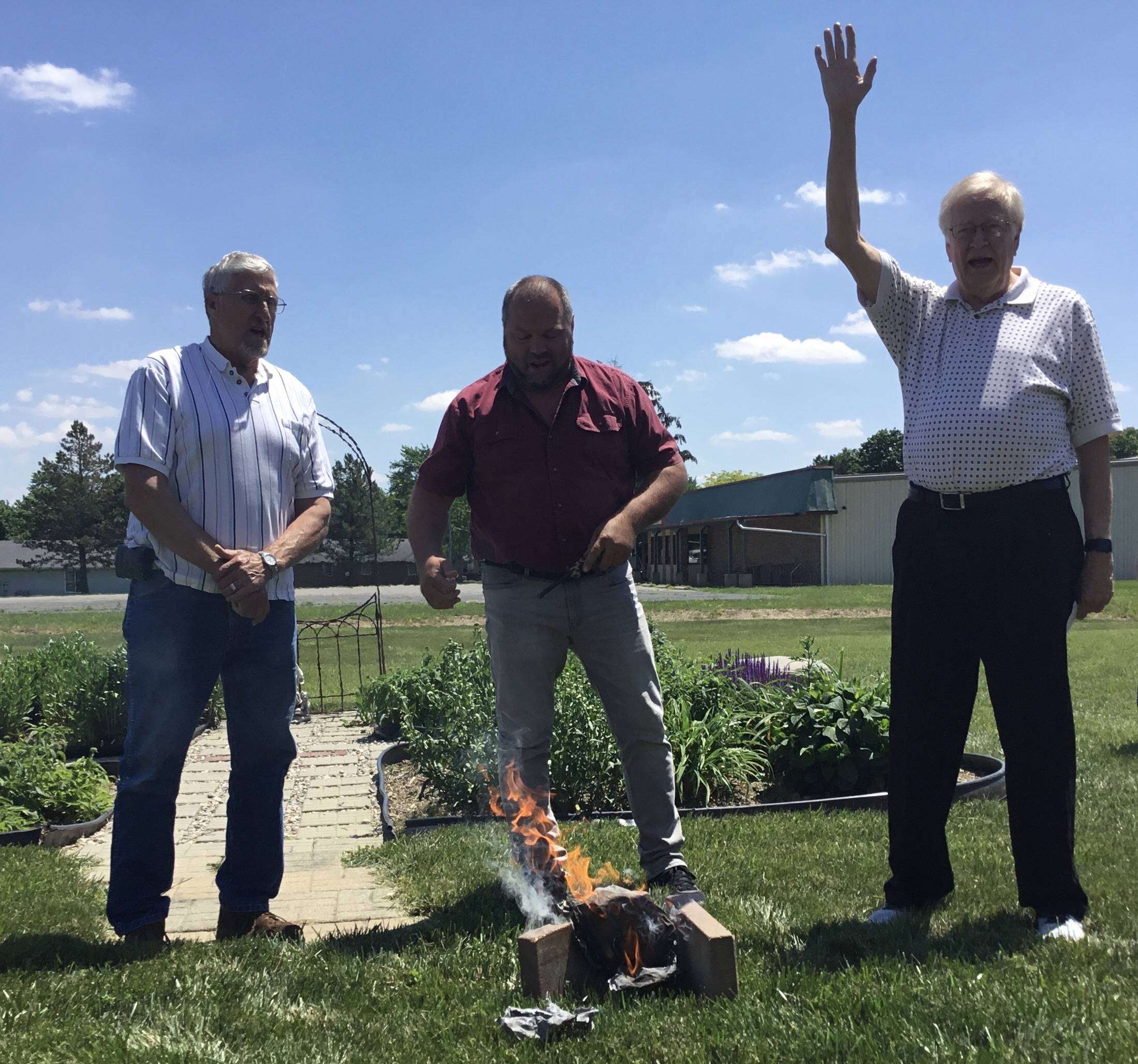 MORTGAGE BURNING…Living Hope Methodist Church leaders Rich Merillat and Jeff Crisenbery along with Pastor Dave Mathis cheered with all who were present on Sunday, June 6, 2021 for the celebration of a Mortgage Burning.  The small church was able to pay off a $380,000 mortgage in just nine years! (PHOTO BY REBECCA MILLER, STAFF)

Living Hope Free Methodist Church, in West Unity, Ohio, was celebrating with great joy on Sunday, June 6, 2021, as they gathered outside after morning worship, for a Mortgage burning ceremony.

It felt like just yesterday that they sold their little church building down the street and moved into their lovely new building. According to Church Secretary, Barb Crisenbery, the mortgage at the time was at $380,000 and in just nine short years they paid it all off.

When they got the mortgage loan, they made an over $200,000 down payment as they had saved that much up before building.

The property had been purchased, from the village of West Unity, many years before they started building on it.  Construction started in Sept. 2011 and in 2012 they moved in. The contractor was Tim Scherer who does a lot of building around the West Unity area. They were happy to have him as their contractor.

They started the loan with Huntington Bank for $380,000, which means that this little church paid around $42,222 a year for nine years!  At one point they transferred the balance to County National Bank of Hillsdale. The loan was signed on Sept. 20, 2011 and they paid the last payment on the exact same date nine years later, Sept. 20, 2020.

“Despite the pandemic, we were able to have that great accomplishment,” Crisenbery shared in a phone interview. “In the midst of all the awfulness of the pandemic, the giving at our church never dropped.”  They are now saving up to eventually do another phase and already have $30,000 saved toward that project.

This specific Sunday morning marked another occasion.  Pastor Dave Mathis, who has been their pastor for fourteen years, had announced on FaceBook that week, that in August he will be retiring.

The church’s Superintendent, Bruce Rhodes, from the Southern Michigan Conference of the Free Methodist Church, was present for the big day as the Special Speaker, and chose to speak on the topic of Transition.

Using the account in the book of Acts when the church in Antioch (where believers were first called Christians) were told by God to set apart Barnabus and Saul for a new work.

Barnabus was the Founding Pastor of the church in Antioch and he had gone to find Saul of Tarsus, a man who had been killing believers before he was confronted by God and changed.

Barnabus asked Saul to come and help him, so Saul was basically the Assistant Pastor, or at least a key player.

Rhodes pointed out that these two men were an important and integral part of that church but when the Holy Spirit said to send them out, the church prayed over them and sent them out. What a radical transition time! They did not say, “Oh no! How can we go on without them?”

Rhodes reminded the congregation that, “All leaders are on loan by the Holy Spirit and when He moves one on, He will be faithful to send another.”

He read a poem by Saxon Kissinger called “No Indispensable Man” and talked about how Paul (who used to be Saul) taught the Church not to be followers of men, but of only Jesus.

He commended Pastor Dave for his faithfulness to pointing others to Christ and leading so many to Him, while he has been at Living Hope.  He assured the congregation that just as the Lord sent Pastor Dave to them, even when their church was being considered for closure, the Lord will provide a new pastor who will be the right one for this time.

“God knows you all and you can trust him.”

The service also included a heart warming worship time, an excellent piano duet during the offering and a power point of the history of leaving the old building and moving into the new.  Following the service, everyone went out to witness the actual burning of a copy of the mortgage, which included about ten pages.

Rich Merillat and Jeff Crisenbery did the honors, led in prayer, thanking God for helping them to finish it so quickly, and then cheered with the whole group as they watched it burn.

Everyone went back inside to enjoy a delicious sack lunch and homemade cookies.

It was definitely a Sunday for the books!