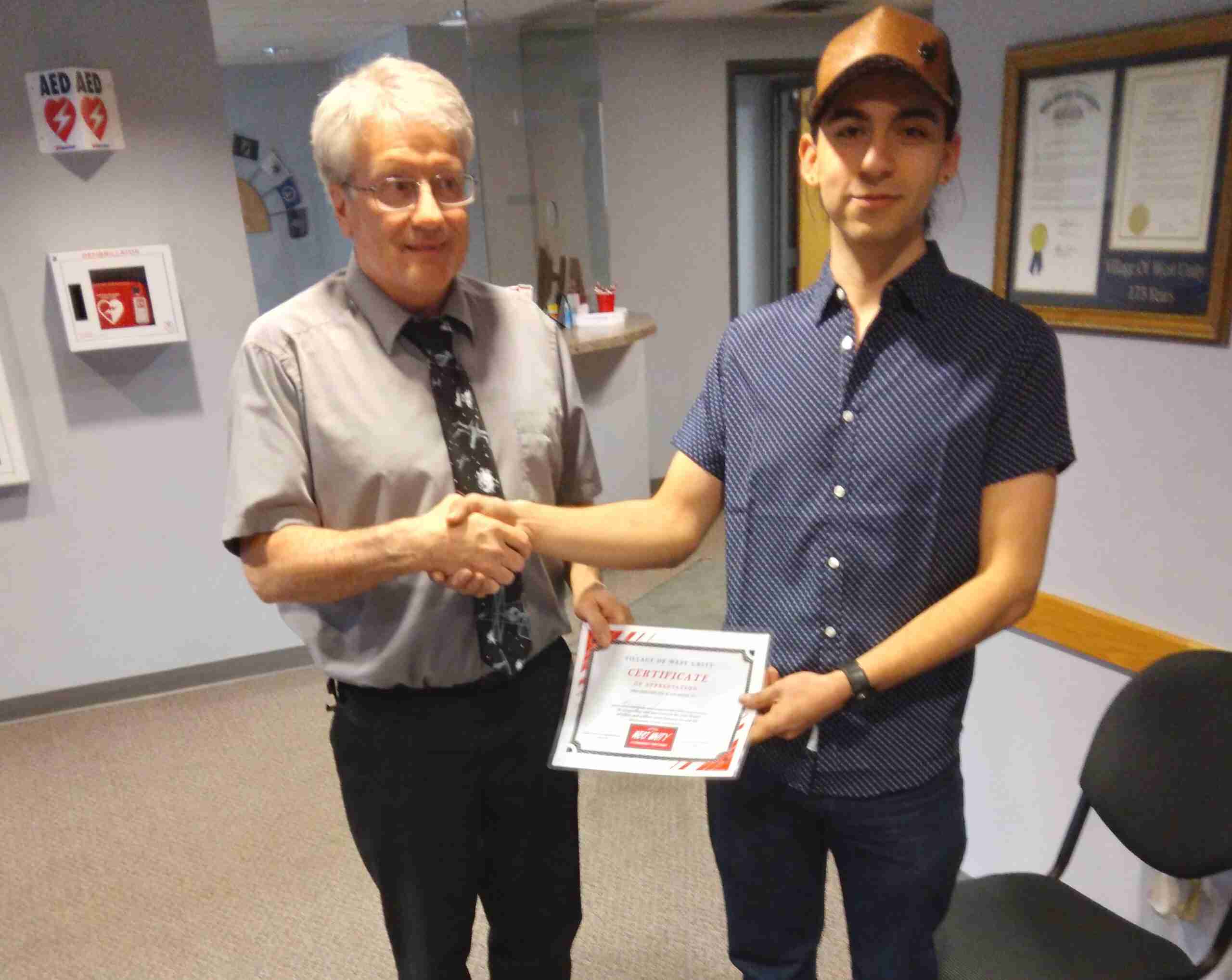 RECOGNIZED FOR HEROISM … Mayor Don Leu presented Diego Ledesma with a certificate of appreciation for his act of heroism. (PHOTO BY DANIEL COOLEY, STAFF)

The council’s first order of business was to approve of the paying of the bills. The council then passed the changes to the minutes of the previous March 10 meeting.

Mayor Don Leu then presented a certificate of appreciation to Diego Ledesma, for his act of heroism. Ledesma, a Texas resident, has been living in Holland, Ohio, while working in the area.

A bus from Kamco had come to pick up Ledesma and other workers from the Holland area, when the bus driver became ill.

Ledesma, despite not driving a bus before, drove the vehicle to Kamco himself, where the driver was able to receive medical help. The driver is now reported to be okay.

That was followed by the council approving of Ordinance 2022-3, in which all future cable franchise fee revenue will go into the Village Park Fund, in place of the General Fund.

Next, the council approved Resolution 4-2209, which established the rates of 16 different areas of West Unity employees, including new deputy clerk hire Aubrey Jennings.

That was followed by the council approving Resolution 04-2022-10, to put five mills onto a tax.

The council then passed Resolution 4-2022-11, requesting the Williams County auditor to certify the current tax valuation.

Village administrator Josh Fritsch then gave a report. Jones and Henry will be bidding for the Jackson, Jefferson and Church Street project and that the Church Street storm sewer part might likely go up from $150,000 to $250,000. Jones and Henry are now working on the design for the resurfacing of Lincoln Street.

Greg Kimple of Edgerton may be picking up the Splash Pad from Minneapolis, at a charge rate of just $1,000.

Ward Construction is working on getting a quote on chip and seal for a couple of village roads. Garcia gave Fritsch a quote to crack seal roads in the village.

Council will discuss with Fritsch at the next meeting, about whether an eight or 12 inch culvert will be needed.

The street light at the corner of Liberty and Jackson will need to be moved to the northeast or northwest corner of the intersection.

Also, council members passed a request for Little League to use the $2,000 that it has to put in stone on the fields.

Next, police chief recommended that the stop sign at Maple be removed, making a three way stop to just a two way stop. Council approved of the recommendation.

Mayor Leu asked about the street light project and the council recommended that they wait another year to start on the project.

Leu made a proclamation that April 14 be declared Arbor Day and there will be a street meeting on May 4 at 6:30 p.m. to go out and look at village streets and see what needs to be repaired first.

There were three choices on playground equipment and council decided on the top choice, Leu said they expect to break even on the project.

Solicitor Rakes said that the deadline for the annexation petition is due by April 30 and will be discussed at the May meeting.

Rakes said that there will be a Resolution at the next meeting on the railroad property.

The next council meeting will take place on May 12.