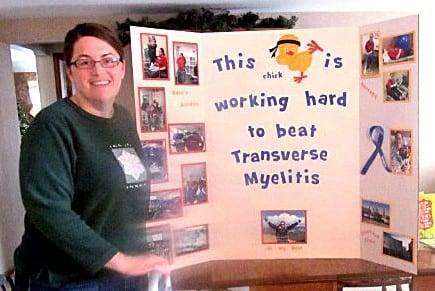 A West Unity woman has been to the mountaintop and has been to valley, but now she faces a test of endurance for her best shot at becoming whole.

Angela Heisey, 38, suffers from Transverse Myelitis, an autoimmune disease similar to multiple sclerosis. Where MS sufferers have multiple lesions on the spinal cord and brain, transverse myelitis has a single lesion on the spine.

She has been battling the disease for the past 10 years and now is relying on hyperbaric treatments as her opportunity for a cure.

The process involves 40 2 1/4 -hour sessions over an eight-week period in Wauseon at Sara’s Garden. The treatments involve forcing oxygen into her tissues that will cause her nerve endings and blood vessels to grow anew.

“It will speed up the healing process,” Heisey said from her parents home north of West Unity.

A benefit event was held Feb. 27 to help her raise the money for the treatments, and while enough money was raised to cover those costs, she lost her only source of income when her short-term disability ran out and she lost her job recently.

Heisey developed the disease in 2006 when she noticed numbness in her feet on a flight home from Alaska. She had been sick and believes a virus may have been a culprit.

She first noticed her feet felt heavy, even though she could still walk and that feeling began creeping up her body. Over the next couple of days while she was making doctors’ appointments, her condition worsened.

“I was numb from the shoulder blades down,” Heisey said. “My arm was not functioning correctly; it was very weak.”

She first went to see a neurologist in Defiance before being sent to Toledo for more tests. That’s where she was first diagnosed with transverse myelitis, a disease that affects 1,400 people a year in the country.

While it can be diagnosed through MRIs and spinal taps, a definitive cause has not been discovered. Heisey said the disease is both neurological and autoimmune.

The disease causes the body to attack blood cells and a single lesion forms on the spinal cord. The lesion then becomes scar tissue, which can flare up any time the person gets sick. There can be breaks of a couple of years between episodes, Heisey said.

But sometimes the disease can return with a vengeance sooner that that as Heisey is dealing with another episode which came a week and a half after she went back to work.

“She didn’t get any time to recuperate and catch up on her bills,” dad Steven Heisey said.

The recent flare up has affected her ability remain upright, Angela Heisey said.

“I have a lot of balance issues,” Heisey said about sometimes simply falling backwards.

Her father Steve Heisey said someone has to walk behind her and stand her back up. She weakness in both legs and uses a walker to get around her home.

“The right leg is my worst,” Angela Heisey said. “It’s numb and tingly. Yesterday it felt like it was frostbit.”

The symptoms are similar to a stroke, Steven Heisey said. In a previous flare up her cheek was numb and it affected her ability to smile. This most recent incident did not cause similar effects.

But it hasn’t been all bad over the past decade. During one her periods of calmness, she scaled a 14,000-foot peak in Colorado in August 2014. She also was a missionary in Haiti for a year before her legs stopped working.

Now she sees the hyperbaric oxygen therapy has her last, best hope for healing. She will be placed in a tank where a pressurized hood will pump 100 percent oxygen into her body. The influx of the oxygen is intended to rejuvenate her body.

She used to receive treatment at the Cleveland Clinic where she received steroids during her flare ups, but those doses began to take a toll on her immune system.

“I’ve tried everything else,” Angela Heisey said. “I am also doing physical therapy.”

Her dad shares her take on the next step.

“It can’t hurt anybody to have these treatments,” Steve Heisey said. “If it speeds up her healing process it will be worth it.”

Even if the treatments are successful, there will be pain as the new nerve endings will become noticeable after three weeks.

“I will see new nerve pain,” Angela Heisey said. “The last couple of days I have been having more nerve pain.

“So I am guessing the nerves are starting to regrow.”

So as she waits to get over an illness that has caused her to miss some treatments, she looks to the future with mixed emotions. The cost of the treatments may be covered, but other expenses won’t be.

She has an extensive network of family and friends for support, but without an income she won’t be able to cover her medical bills. Applying for government help can take six months even if she is successful in her application.

If anyone wants to help, Angela suggests just sending money directly to Sara’s Garden in Wauseon with her name attached to the gift.

“It’s the only non-profit hyperbaric treatment in the state and insurance doesn’t cover it,” Angela said.