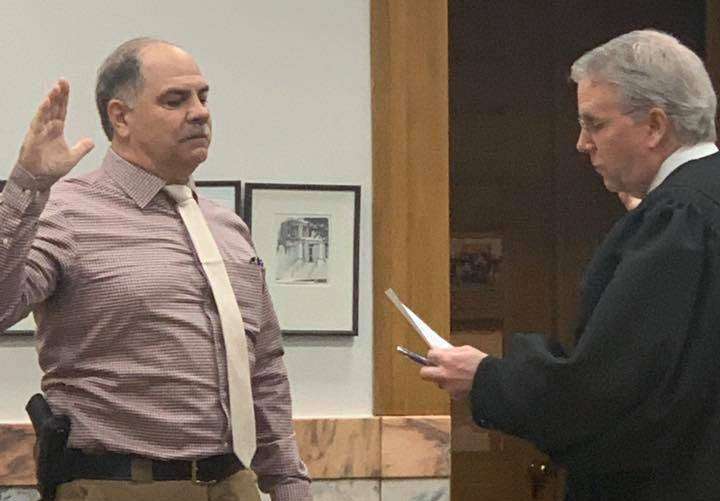 In a Special Session held on Wednesday, March 18, 2020, Williams County Commissioners Lew Hilkert, Brian Davis and Terry Rummel addressed the situation of Williams County’s need for a new sheriff, which was not taken care of due to the March 17, 2020 election being postponed by Governor DeWine.

Following an Executive Session “to consider the appointment of a person,” the Commissioners, with Commissioner Davis, who was sick at home, in the meeting via telephone, as approved by the Attorney General on March 13, 2020, voted to approve Resolution 84 – Accepting the Resignation of Williams County Sheriff Steven M. Towns, effective Wednesday, March 18, 2020.

The resolution as a whole stated, “It is with reservations and sadness that I am resigning my position as Sheriff of Williams County on this date at 0759 hours as required by documents signed on February 12, 2020 and March 10, 2020.”

Hilkert announced that the Special Session was held specifically in regards to accepting resignation from the current Sheriff and to appoint a new Sheriff. Over the next few minutes, Rummel and Hilkert explained the process they had gone through to reach their decision about a person to appoint:

Commissioner Rummel made a motion to approve Resolution 85 – to appoint Gary E. Mohre to serve as acting Sheriff for Williams county and to perform the duties thereof between and including March 18, 2020 until such time when a person is appointed Sheriff by the Central Committee and such person qualifies and takes office. The approval was unanimous and Mr. Mohre, who was there in person, accepted the appointment.

Rummel stated, following the vote, “I would like to just add on the record that I had the privilege of growing up with the Mohres. Mose Mohre mentored me in business and in politics and I am very, very honored and proud to have Randy and Gary here, and to honor Mose Mohre today.”

With no other comments the meeting adjourned.

Be the first to comment on "Williams County Commissioners Appoint Gary E. Mohre as Acting Sheriff"