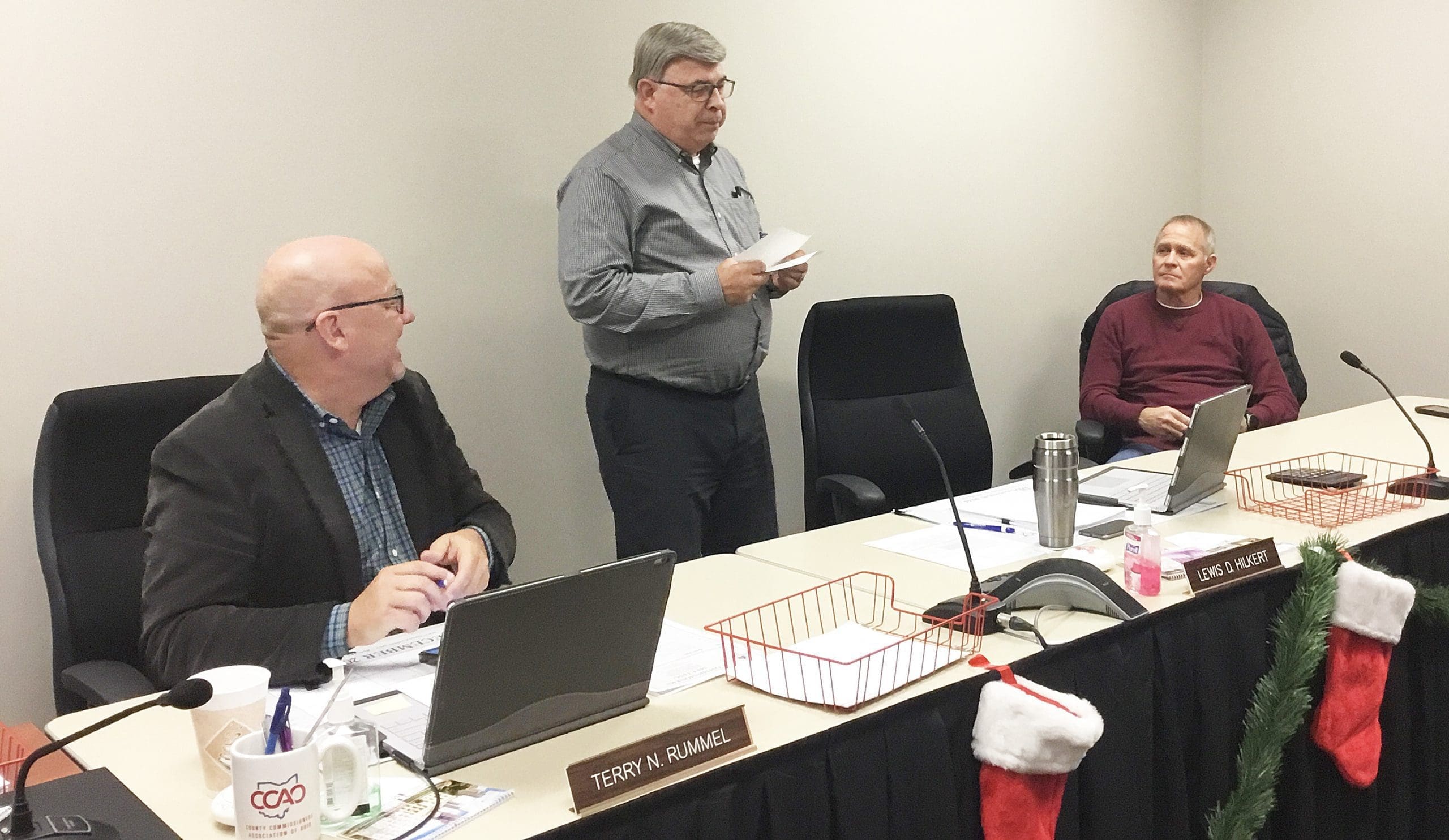 BRIAN DAVIS … Williams County Commissioners Terry Rummel and Lew Hilkert took some time at the end of their December 19, 2022 sessions to thank and commend Commissioner Brian Davis for his four consecutive terms of service to the county as a commissioner. Davis’ seat will be filled in January by newly elected Commissioner Bart Westfall. (PHOTO BY REBECCA MILLER, STAFF)

It was an extremely full morning for the Williams County Commissioners as they met in session on December 19, 2022, but Commissioners Lew Hilkert and Terry Rummel did not let the busyness push aside some moments of thanks to their fellow commissioner, Brian Davis, as he steps off the board.

Hilkert stood to share his remarks concerning Davis, stating, “with the holiday season upon us and with people having different schedules happening, I want to take time today while we have the whole board here to recognize Commissioner Davis’ four terms of service to the county.”

He congratulated Davis on being the first person to ever have been elected for four consecutive terms.

Hilkert then listed some of the accomplishments since 2007 when Davis took office on the Williams County Board of Commissioners.

Present for the moment were all three commissioners as well as incoming Commissioner Bart Westfall, Clerk Anne Rummel and Assistant Clerk Robin Kemp as well as the media.

There were smiles and chuckles as he spoke about the difficulties which they have worked through together in order to accomplish the items he mentioned.

“When we faced that downturn of the economy in 2008, Brian was a big part in helping us to adjust during that time,” he said.

Hilkert began the list, “Cutting our teeth on Lick Creek, which turned out fine in the end, but that was a couple years of turmoil and thank you for your leadership during that time.”

Some other projects mentioned, in which Davis played a large part with his business wisdom and knowledge, and all which had large amounts of money expended, were: the sidewalk project at the courthouse; purchase and renovation of the East Annex; the courthouse roof renovation; “beautification of landscaping around the courthouse in which he and his family were instrumental even spending their own time and money in planting flowers and things like that;”  he has been an integral part at Hillside Country Living with that being a rather complicated board to be on because of funding and Brian has helped immensely; and his input on the MARCs Radio System; working with EMS and CCNO with an impact on those.

Hilkert wrapped up his comments by saying, “I know I am missing things, but I did want to point out that I appreciate you, what you have done, and I wanted the full board here when those comments were made.”

“So, congratulations and thank you for your service.”  Davis said thank you amidst applause from those present.

Commissioner Rummel added his thanks, saying, “I would like to add also that your leadership has been valuable, and your knowledge of the county, and all of your ideas.”

“Even though we sometimes disagreed, you come up with things just as we are talking…the things that come off the top of your head are amazing, and I appreciate that about you, so thank you.”

After the meeting adjourned the three of them reminisced about some other projects they worked on together and enjoyed some laughter over how they had all worked out.

Another aspect of that morning’s meetings included the Williams County Port Authority Board addressing the commissioners for the second time that week.

Members of the Port Authority who were present were Dave Newcomer, Dawn Fitzcharles, Bill Turner and Sean Rupp.

Each one spontaneously shared their thoughts on: how the money would be used to “address the employment and housing issues in the county”; how important it is for the area businesses to see the commissioners are willing to assist in the growth of residential housing in the community, how donations are coming in to the tune of $600,000 so far with $150,000 pending; the statement that “this is a county issue, not an individual village issue,” some options for subdivisions that are in the offing with over 200 lots, their first home has already been sold, their hopes to get started on the next house soon, and the economic impact this will have for the businesses that are short to the tune of 2000 employees in the county.

Turner said that as an employer in the community he is aware of how many employers across the county are giving up on ever having enough employees.

“We have a safe and attractive county for people to come and live,” he said, continuing, “We have communities with a lot of community pride and they take care of their communities. We can attract people to our communities.”

He explained that people who drive to Williams County to work have expressed a desire to move here and he says he is convinced “that if we lead the way, there are going to be more people that want to get in on the action and do more things privately.”

They all agreed that they are “just getting us going” and believe that they will not need to do this forever as private parties will jump in.

She called what they were asking for “just a piece of the puzzle” and said they are “investing in opportunities that are going to live far beyond anyone in this room. A hundred to a hundred and fifty years at least, that a typical house stands.”

Changing the footprint in the county is their hope with their “multi-faceted plan.”

She spoke about the former model being “on the backs of one group” and doing it this way is spreading out the expenses of building residential housing, making it affordable for the homeowner.

Turner said that they have also applied for a community development grant to help spread out the burden even more.

Commissioner Rummel commented on how the schools and communities are helping with development now, and that collaboration is the way to get it done.

It was explained that the first $350,000 will go toward construction, possibly in a development in West Unity as that looks like it might be their next big project.

They also have a lot purchased in Bryan and there are other lots that are coming available around the county.

The commissioners were assured that as they put in the county money, others will definitely be adding their money to the effort.

Turner stated, “What you are doing will really help with a few organizations that are sort of hanging out there, and want to help, but they want it to be a split between public and private, just like you do.”

“We all want the same thing, but hearing that the county is in, in a big way, would be a boost.”

“So yeah, I feel like that the end of the three years we probably will be able to raise 1.2 million to go against your almost a million, as we are already halfway there.”

It was agreed that the Port Authority will do periodic reporting to the Commissioners on how the process is going.

The commissioners were assured that they are creating month end balances and keeping good records on all the financials.

There was some discussion on how the economy is going and the recognition that their pledges for 2024 and 25 will depend on that.

Hilkert encouraged getting lots developed in more than one place at a time and the PA members agreed that they hope for that as well.

The commissioners then went into recess, “to hammer out the details” of the motion to approve the money for Port Authority.

The Commissioners also held an Executive Session that morning, with Sheriff Tom Kochert, Bart Westfall and Assistant Prosecutor Nick Fee present, for the discussion of security matters and, in regular session approved the following: