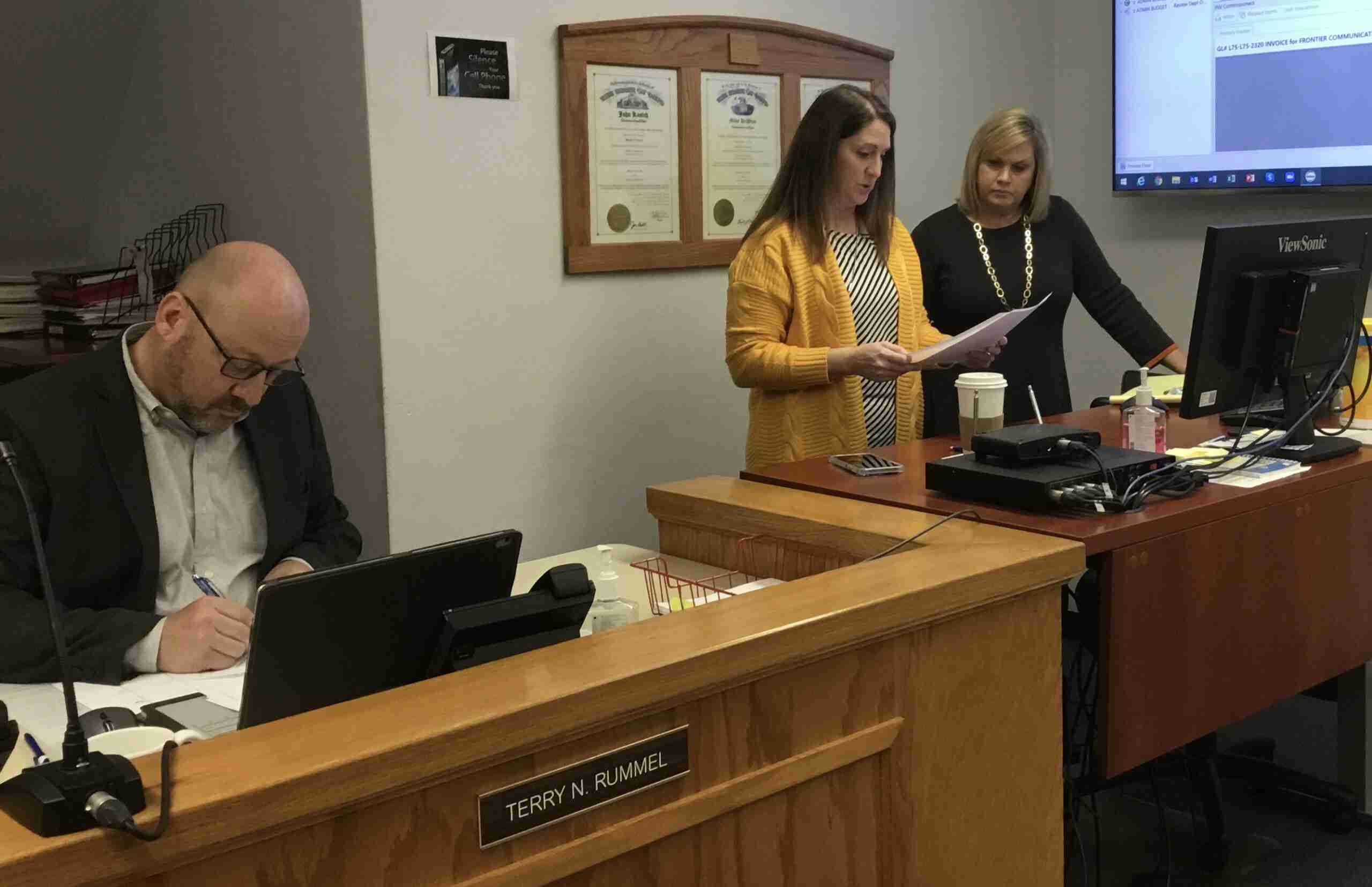 BEING PREPARED … Anne Retcher, Commissioner Clerk, took some time before the January 13, 2022 meeting of the Williams County Commissioners to do some training of Auditor Vicki Grimm on how to use the system for recording meetings. It was explained that with covid they have realized the need for a back-up “in case it ever happens that both Anne and Robin Kemp are out at the same time.” (PHOTO BY REBECCA MILLER)

The approval of a few items took place at the January 10, 2022 meeting of the WC Commissioners, which included:

-Resolution 23 Entering into a IV-E (4E) Contract between WC JFS and Family Services and Keeping Kids Safe for Title IV-E Agencies and Providers for the Provision of Child Placement. Maximum amount payable is $80,000 and term is January 1, 2022 -December 31, 2022.

-Resolution 24 Entering into a IV-E Contract between WC JFS and Family Services and Ohio MHAS – Keystone Richland Center LLC dba Foundations for Living for Title IV-E Agencies and Providers for the provision of Child Placement. Maximum amount payable is $10,000 and term is January 1, 2022 – December 31,2022.

-Resolution 25 Entering into a IV-E Contract between WC JFS and Family Services and Richmeier Therapeutic Home for Title IV-E Agencies and Providers for the provision of Child Placement. Maximum amount payable is $30,000 and term is January 1, 2022 – December 31, 2022.

-Also signed were Letter to Al Fiser – Pioneer Village Administrator for Non-exclusive use of existing Right-of-Way owned by county regarding C.R. S and C.R. 15; Dog warden report for January 3-9, 2022

It does need to be updated and adopted. He asked the other commissioners if it would be fine with them to move forward in having that manual updated by Clemans and Nelson in the near future.

It would have the word Commissioners removed to say Williams County Policy Manual and a few policies would be changed or updated. Hilkert said that he would work with the Commissioners Clerk, Anne Retcher, to make sure it does not make extra work for their office, and will make a presentation to the committee.

With no further business for the day, the commissioners adjourned.

The Thursday, meeting on January 13, 2022, began with the approval of:

-Resolution 26 Transfer of appropriations for Commissioners, Hillside, IT and Records Center

-Resolution 27 Advertising for Sealed Bids for Project 1-2022 for Asphalt Emulsion Products. The bids will be on March 3 at 11 a.m. in Commissioners’ office.

-Also Signed were Credit Card Appropriations for January for the Engineer’s office; Letter going to Veteran Memorial to Bob Walkup in regards to their ARP request that he submitted; the Park District submitted a letter requesting intergovernmental contribution in the amount of $5000 from A63-0915 Grant-County Park Commission to cover 2022 operating expenses; and a letter in regards to 2021 Microfilm Board Activity that Patti (Rockey) has to submit per ORC.

Following a short recess, the Commissioners met with Hillside Country Living Executive Director, Darrell Moore to talk about ARPs funding. They went through a number of details in his report, clarifying that he is requesting $896,055.

At that point the commissioners informed Mr. Moore that since the last time they met with the Auditor, and decided they needed more explanations, a new rule has been made that “kind of changed things.”

Commissioner Hilkert said that it looks like it might simplify things and they will find out at a Webinar later in January. Commissioner Terry Rummel stated that they plan to attend and believe it will help them know how they can simplify the spending side of ARPs.

They thanked Mr. Moore for coming to present to them and for the great job they are doing to keep the residents at Hillside healthy.

“Some nursing homes are having real nightmares, but we appreciate what you and the staff are doing out there to keep that place healthy,” he stated. The meeting adjourned at 9:49 a.m.