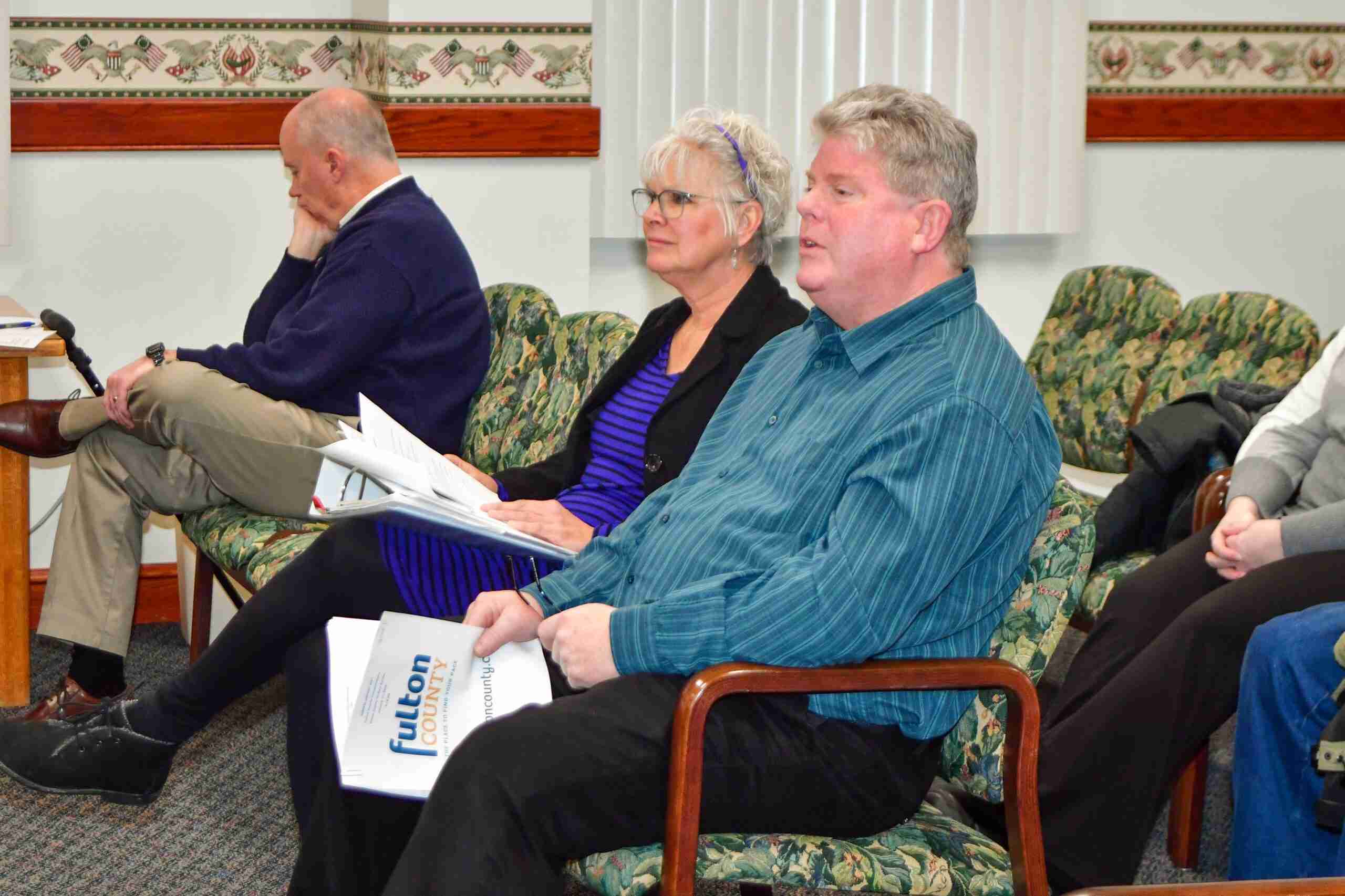 VISITORS BUREAU … Julie Brink and Steve Van Sickle, from the Fulton County Visitors Bureau, give a presentation to the Fulton County Commissioners regarding the organization’s annual report. (PHOTO BY JACOB KESSLER, STAFF)

The Fulton County Commissioners held their meeting on Tuesday, January 11th. The meeting was called to order at 9:00 a.m. with Commissioner Joe Short absent. Everyone first participated in a prayer before performing the Pledge of Allegiance.

Commissioners first moved to approve the minutes from the January 6th meeting as well as the current agenda as presented.

-Resolution 026 to increase and transfer appropriations for various departments.

-Resolution 027 for a release of 2nd half of the 2021 domestic violence fee collections.

-Resolution 031 to award a bid for 2022 construction materials- aggregate bid #2.

-Resolution 033 to enter into agreement 2022-002 with The Ohio Department of Development for housing RLF administration.

-Resolution 034 approved oversight of contract 2022-003 with Stephen Hallett on behalf of the JFS.

-Resolution 035 approved oversight of Contract 2022-004 with Inner Peace Homes on behalf of the JFS.

-Resolution 037 approved oversight of contract 2022-006 with Keeping Kids Safe on Behalf of the JFS.

-Resolution 038 approved oversight of contract 2022-007 with Community Teaching Homes on behalf of the JFS.

-Resolution 039 approved oversight of contract 2022-008 with Adriel Schools on behalf of the JFS.

-Resolution 040 approved oversight of contract 2022-009 with Fulton County Juvenile Court on behalf of the JFS.

-Resolution 041 to reappoint a board member to the NOW Juvenile Detention Board.

-Resolution 042 to approve personnel request on behalf of JFS.

The Commissioners then heard a presentation from Julie Brink and Steve Van Sickle from the Visitors Bureau. The presentation was in regard to the organization’s annual report. Julie Brink began the presentation by talking about the effort done in the past couple years to promote tourism.

She stated that, with the issues Covid presented, it had been a crazy two years but that they had kept up with the rest of the State in regard to how much information they put out to the public.

This year, the Visitors Bureau will be “tip-toeing” into tourism this year as stated by Julie. Commissioner John Rupp asked the two presenters if there was more information available regarding the organization’s accounts.

The papers do not show exactly how much money is left in the account and the information is needed so the Commissioners are able to tell if the organization needs help. Julie Brink stated that the information would be forwarded on to them.

The issue of continuing local radio advertising was also brought up regarding whether or not it was a good idea since the objective is to bring in outside tourism.

Julie Brink stated that she agreed the radio issue could be looked at. She also informed the Commissioners that the analytics are showing advertising should be focused to the north and west due to more people located in these areas being interested in Fulton County.

Julie also informed the Commissioners that another goal is fix the CIC issue with the organizations checks. Jon Rupp stated that the issue will be looked into more. The discussion continued with Steve proposing that the organization put some money into the Wabash trail.

The creation of a funding form for area events was also discussed. The form would allow for area events to submit a request for funding to the visitor’s bureau. A committee would also be established that would go through requests and pick ones that they would fund.

Commissioner Jeff Rupp stated that he thought this was a good idea and would help to promote the other events in the local communities.

A digital sign was also brought up with Jon Rupp stating that this would be a large expense and that it would have to be discussed further. The meeting then adjourned at 9:39 a.m.

The Commissioners also held another meeting on Thursday, January 13th at 9:00 a.m. The meeting was called to order followed by a prayer and the Pledge of Allegiance.

Commissioners first moved to approve the minutes from the previous meeting that took place on January 11th as well as the agenda as presented.

The Commissioners then reviewed the December 2021 investment report and the weekly Dog Warden report for the period ending 01/08/2022. The following resolutions were then approved by the Commissioners.

-Resolution 046 to increase and transfer appropriations for various departments.

-Resolution 047 to enter into agreement 2022-010 with David Geringer for engineering services pertaining to the Fulton County Fair Hog Barn.

-Resolution 049 to accept the resignation from a workforce development employee.

With no other business to attend to, the meeting was adjourned for the day.