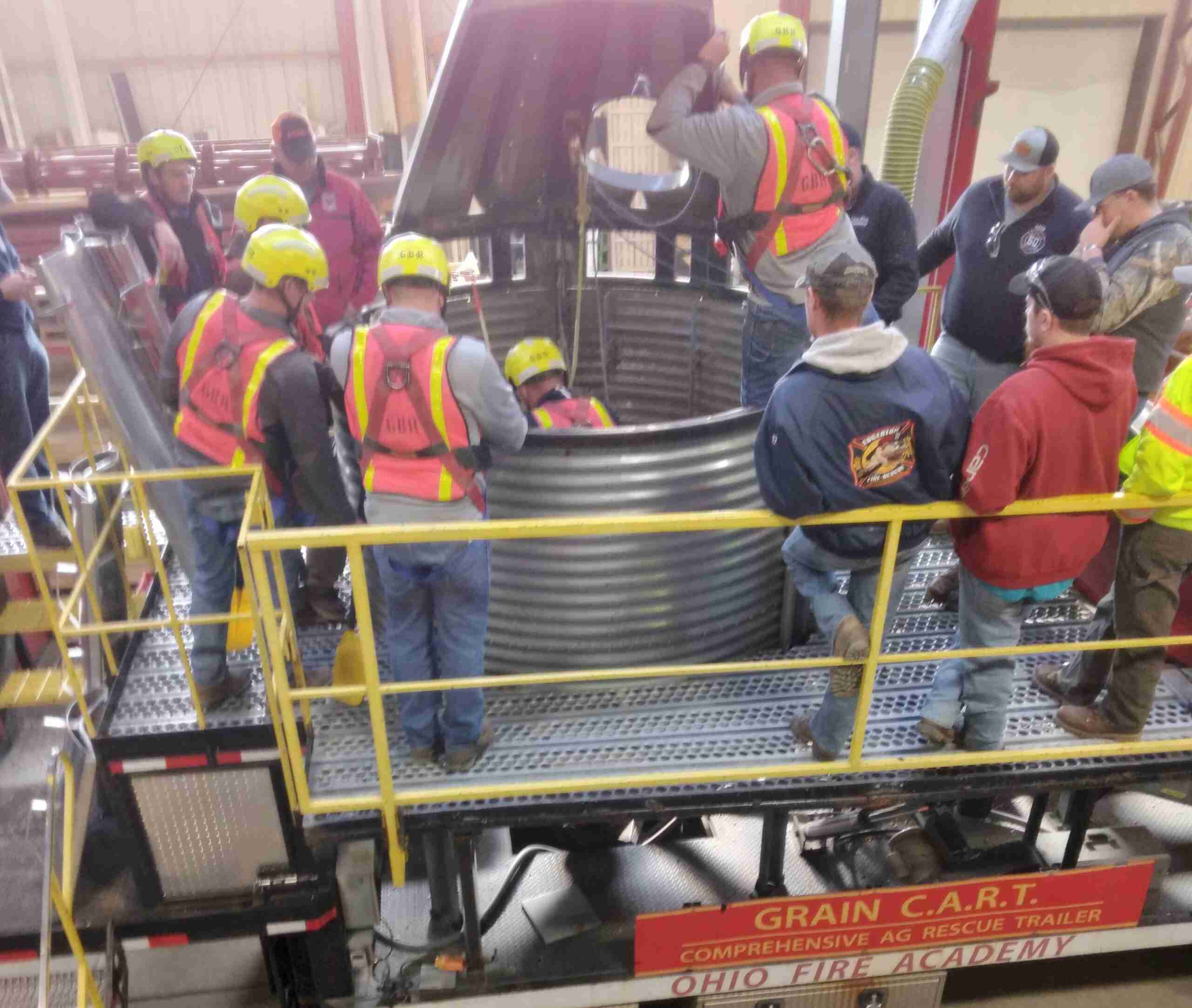 TRAINING … At the grain bin seminar at Elgin Service Station, firemen work on rescuing one of their firemen, from a grain bin entrapment. (PHOTO BY DAN COOLEY, STAFF)

Firemen from eight different Williams County fire stations attended a seminar on Saturday, December 4. The seminar involved learning how to rescue people who become trapped in a grain bin.

One member from each group volunteered to be buried in a bin, while others got the hands on experience in pulling them out.

“We build and sell grain bins here, so we thought this was the perfect place to hold a seminar on grain bins,” Cochran said.

“Williams County last held a grain bin seminar four years ago. This is the first time we’ve had it here. You have to contact the state fire marshal to get the okay to run such a seminar.”

Cochran said that one of the most common ways someone can get trapped in a grain bin is that someone turns the auger (which pulls the grain out ) on and doesn’t know someone is in the grain bin.

It is estimated that 70% of these accidents happen on a family farm. Last year, there were 35 cases of grain bin entrapment nationwide. It doesn’t say how many were fatal and it’s likely that there are many cases of entrapments that go unreported.

“You don’t really think about the pressure or weight that is in a grain bin, but when you see the mess it can make, it wakes you up pretty quick,” Cochran said.

When someone becomes entrapped, depending on how tall the grain bin is, it could take a few hours to get someone out. Some of the tools that are needed are ropes, harnesses, masks and helmets.

All who go into the bin to find the person will also need to get a harness, helmet, mask and rope onto the entrapped person. A coffer, a round tube that builds a wall around the person and away from the grain, also becomes an important instrument.

Shop vacs, drills and an instrument to cut holes in a bin to drain the grain, could be used. In some cases, Snow fence laid around the area where the person is entrapped, has been used before. That way, rescuers can walk on the grain without getting submerged themselves.

”(Unfortunately), if a person is fully buried, it usually doesn’t end well. At the end of the seminar, we’ll talk with the fire chiefs and see how often they want to do this seminar.” ,