WILLIAMS COUNTY GAME OF THE WEEK: Archbold Holds Off Bryan 33-15 To Remain Unbeaten 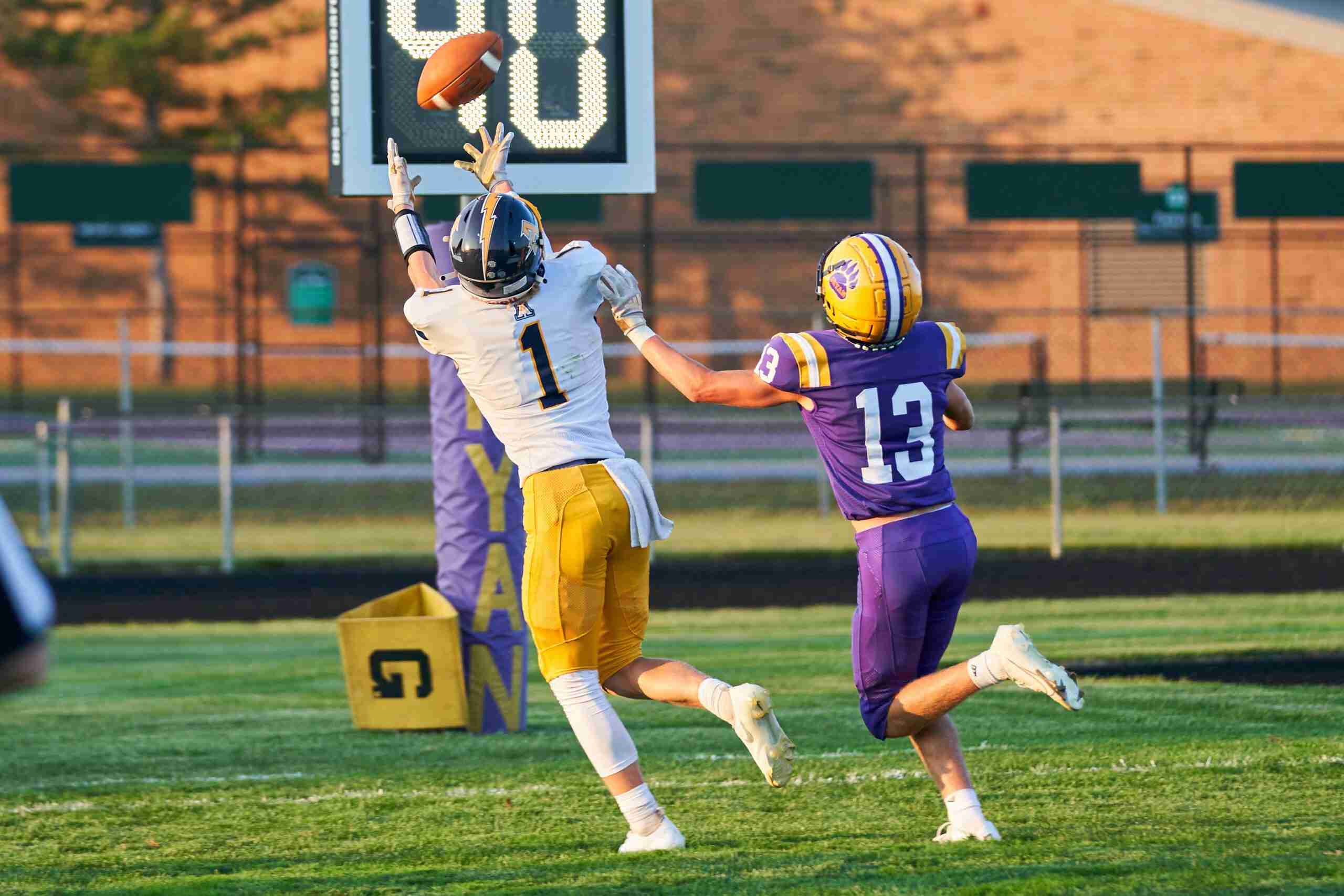 FIRST QUARTER SCORE … Archbold receiver Gavin Bailey makes an over the shoulder catch for a touchdown to give the Bluestreaks a 7-0 lead. (PHOTO BY RICH HARDING, STAFF)

BRYAN – Archbold staved off a late comeback try by Bryan, to claim a 33-15 win. The triumph kept the Bluestreaks unbeaten at 4-0 overall and 1-0 in the NWOAL. Bryan slipped to 2-2 overall and 0-1 in the NWOAL.

“We battled back and had momentum, but you can’t make mistakes and turn the ball over on three interceptions like we did and expect to beat a good team like Archbold,” said Bryan coach Grant Redhead. “We also have to tackle better.”

Behind a strong passing performance by Archbold quarterback D.J. Newman, Archbold cruised to a 26-0 halftime lead. In that first half, Newman was nearly perfect, completing 12 of 13 passes for 203 yards and two touchdowns.

The game then moved to a running clock when Newman scampered in on the first play from scrimmage in the second half, to give Archbold a 33-0 lead.

But the running clock was quickly done away with, when Bryan’s Korbin Shepherd scored on a four-yard run, as Archbold led, 33-7.

With Archbold’s substitutes in on both sides of the ball, Bryan then took advantage. Taking over from its own six-yard line after an Archbold punt, the Golden Bears went on a 10-play drive that ended with a three-yard scoring run by Shepherd. Shepherd also ran in the two-point conversion, as Bryan cut the Archbold lead to 33-15.

Things got interesting after that. Newman came back in on offense, but Bryan recovered a Newman fumble. Taking over on the Archbold 38, Bryan threatened to score again, moving to a first down on the Archbold 17.

“We worked on this all week in practice, that when their tackles released, I was to drop back,” Siegel said. “It worked, as the ball came right to me. I was nervous at first when I saw the ball and I thought, don’t drop this. It turned out to be a big play that our team really needed.”

From there, Archbold ran out the clock, with workhorse running back Carson Dominique carrying the ball four times for 26 yards and Archbold gained two first downs.

“We probably put our second stringers in a little too soon,” Dominique said. “But once we got the ball back (with about four minutes left), my mindset was just to bulldoze and run hard.”

In the dominant first half for Archbold, after punting on its first drive, the Streaks scored touchdowns on four straight possessions. Newman hooked up with Gavin Bailey from 19 yards out for the first score.

Dominique then found pay dirt from 12 and nine yards out respectively and Archbold led, 19-0. Newman then threw a 25-yard TD pass to Josiah Gomez to bring the margin to 26-0.

Bryan then put together a drive right before halftime, but Newman thwarted that threat by coming up with an interception at the Archbold 25-yard line.

At the start of the second half, Jack Hurst gave Archbold great field position by returning Bryan’s kickoff 46 yards to the Bryan 44-yard line. Newman then raced down the left sidelines virtually untouched, to give Archbold its biggest lead at 33-0,

Newman ended up completing 13 of 15 passes for 203 yards. He also rushed for 69 yards on nine carries.

Shepherd paced Bryan with 124 yards rushing on 26 carries. He also caught two passes for an additional 29 yards. Bryan quarterback Dylan Dominique completed 13 of 24 passes for 147 yards but was victimized by three interceptions.