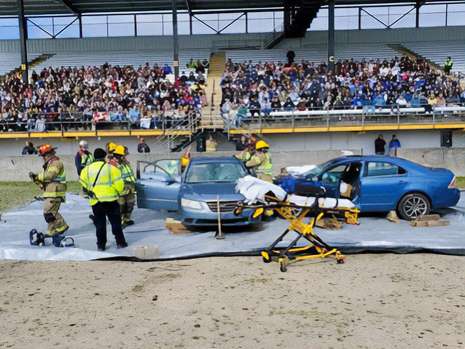 MOCK CRASH … Firefighters work with students to show the dangers of driving under the influence or while distracted. (PHOTO BY JACOB KESSLER, STAFF)

The event was put on to show the junior and senior students, from local area schools, the consequences of impaired or distracted driving.

Local members of the community were also welcome to attend the event. With teen drivers being at an increased risk behind the wheel due to their inexperience, and risk-taking behaviors such as speeding, impairment and distracted driving, vehicle crashed remain the number one cause of death for youths aged 15 to 20.

This year’s crash used vehicles that had previously been involved in a real crash. Local high school students from each of the seven school districts participated as crash victims.

These students helped out tremendously to give the event a much more somber feeling for the local students in attendance.

“Mock crashes are a dramatic presentation to educate teenagers about the true consequences of poor driving decisions.”

“When students see a friend and peer carried out on in a body bag, and another being handcuffed, it hits home. It’s a strong message that aims to influence their driving choices.”

“As young, inexperienced drivers, this is a potentially dangerous time to be driving on the road. As teens start driving and gradually gain independence, they don’t always make good decisions regarding their safety.”

“They may think they are invincible and believe that they don’t need seat belts. Seat belt use is lowest among young drivers. Many teenagers involved in fatal crashes are unbuckled.”

After the crash took place, Williams County EMS Director Kyle Brigle addressed the students. Mr. Brigle spoke about how crashes can affect the rescue workers who respond to the incident, as well as the ways it affects the community.

Teresa Bilow also shared her story of how she lost her eight-year-old daughter in a fatal car crash. The crash occurred due to a driver who had been drinking and failed to yield at a stop sign. Her other daughter, who was five-years old at the time, was also introduced.

Safe communities would like to thank all of the organizations for their efforts, dedication and service which helps to create a safer community together.