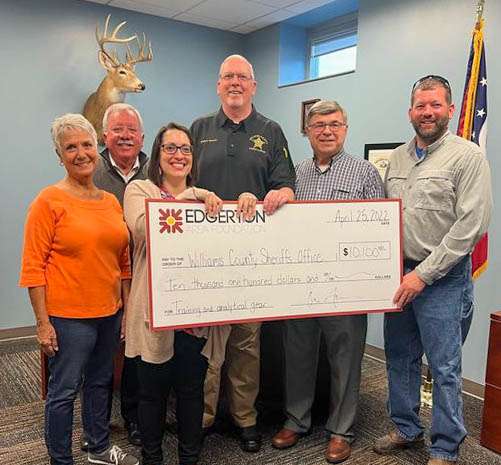 The Williams County Sheriff’s Office recently received a grant in the amount of $10,100. This grant was made possible because of the generosity of West Unity, Edgerton, and Montpelier area foundations.

The money will be used to purchase defensive tactics training equipment and investigative analysis equipment.

Sheriff Kochert explained that this will greatly help the department. “There are a myriad of drills we can run now that we have this equipment.

It will allow for some scenario-based training events as well as full contact, defensive contacts, resisting arrests scenarios, hand cuffing techniques, and weapon transitions. It will almost be like going into the ring essentially.”

The Sheriff also explained that, through the generosity of the City of Defiance’s Police Department, some equipment was made available to the department.

The Sheriff’s Office will now be able to purchase their own. “The Defiance Police Department has been generous throughout the past. But when you borrow equipment from another department you become beholden to their schedule. You also hope the equipment doesn’t get broken,” said Sheriff Kochert.

The money will also be used to buy investigative equipment for the department’s detectives. Different kinds of analysis equipment, cameras and more are being looked at.

“The detectives will have a kit they can use to investigate homicides and things on down. We will have the tools we need, and we will be available to other departments,” stated Sheriff Kochert.

The department had previously made a list of items needed along with a cost. With the majority of items now being paid for through the grant, no request will need to be made regarding the procurement of funds from the County Commissioners.

In that way, the department has saved the taxpayers money while also obtaining much needed equipment.