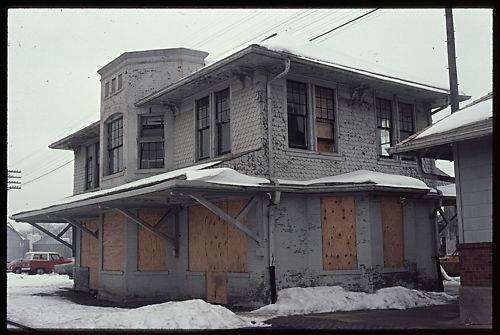 The depot was completed in 1898 at the foot of Empire Street, north of the railroad. Jacquelyn Whetro’s “Montpelier Through the Years” reprinted this 1898 local newspaper account of the new depot: “Our handsome, towering, commodious depot is about completed. She is a thing of beauty, the pride of our city and the admiration of all. It surpasses everything on the Wabash line between Detroit and Chicago for architectural design, convenience and elaborateness of finish.”

The building sat vacant for approximately two years after railroad offices were moved to Fort Wayne, a more centralized location.

According to railroad representatives, the historic depot was becoming a safety hazard when it was razed by Norfolk & Western workers on February 24, 1981.

This January 1981 image of the former Wabash passenger depot is from the Kevin Maynard collection–Courtesy of the Williams County, Ohio, Local History Exchange.

Be the first to comment on "(1898) – Wabash/Norfolk & Western Railroad Passenger Depot (Montpelier, Ohio)"